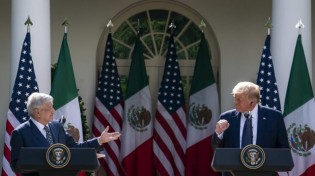 By Lucy Westcott
The violent drug war in Mexico's borderlands has changed the face of the country, injecting fear into both average citizens and the journalists trying to tell their stories.

By Jim Lobe
The electoral and political stars are aligning in ways that offer the United States and Mexico major opportunities to substantially deepen their cooperation, particularly on trade, energy, and immigration, according to a report released here Wednesday by a special commission of the Inter-American Dialogue (IAD).

By Daniela Pastrana
Each scarf represents a life cut short. Each stitch, a tear. Each thread, a cry of frustration about death and impunity.
Next Page »
ADVERTISEMENT ADVERTISEMENT