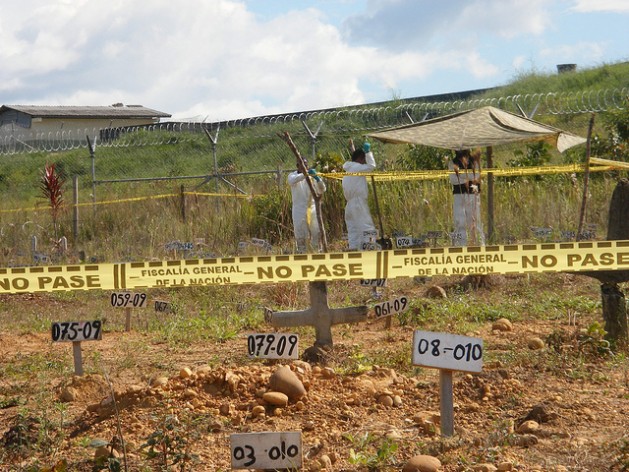 Unmarked graves of victims of Colombia’s half-century civil war, like this one in La Macarena in central Colombia, are scattered across the country. Credit: Constanza Vieira/IPS

Colombia has been the host of some of the most extreme and brutal violence in Latin America’s history. The country’s half-century long conflict has taken the lives of almost a quarter million women, men, and children, and displaced nearly six million more.

The United States has financed much of the conflict in recent years, investing nine billion dollars since 2000 – much of it to bolster Colombia’s security forces.

Yet peace may be near. On May 16, the Colombian government and the Revolutionary Armed Forces of Colombia (FARC), the country’s largest guerrilla group, signed a preliminary accord on the third of five negotiating points in their ongoing peace talks in Havana, Cuba: illicit drugs.

The agreement offers a viable plan for the FARC to end its involvement in the Colombian drug trade, alternatives for small-scale cultivators of crops destined for illicit drug markets, and meaningful policy reforms at the national level for addressing issues of drug consumption and public health.

Hope too lies with an announcement that came earlier the same day. Following national and international pressure – including an inter-parliamentary letter signed by 245 representatives from the United States, United Kingdom, and Ireland – the FARC announced a unilateral ceasefire.

While the government maintains that it will not end military operations until an agreement is signed, and though the FARC’s temporary ceasefire ended on May 28, this act is encouraging because it significantly decreased violence and will likely increase confidence at the negotiating table.

According to the International Committee of the Red Cross, hundreds of thousands of Colombians continue to be affected by the conflict every year. Ensuring that all parties respect international humanitarian law is essential and will likely help to advance the peace talks.

Domestic political shake-ups, though, threaten to disrupt this progress. In the first round of Colombia’s presidential elections on May 25, sitting President Juan Manuel Santos, who began the talks to the dismay of many former political allies, came in second to conservative hardliner Oscar Ivan Zuluaga.

Zuluaga, who is allied with former president (and current senator-elect) Alvaro Uribe, has made clear his scepticism towards the talks.

While he has now softened his stance in advance of the runoff election, his long-time opposition to the process remains concerning. Santos and Zuluaga will face off in a second-round vote on Jun. 15.

The accord on the drug issue – declared a “partial agreement,” as no individual agreements are final until all points on the agenda have been agreed upon – is little short of historic.

The language, which was agreed upon by both parties, reflects a significant shift away from the prohibitionist approach to drug policy.

Adopting some of the proposals of the growing community calling for drug policy reform, the accord acknowledges that “evidence-based alternatives” to current policies are needed to address problems that may be associated with drug consumption, and distinguishes between the cultivation of crops for the illicit market and drug trafficking.

Furthermore, it calls for the expansion of crop substitution programmes, recognising that many rural communities rely on coca and opium poppy cultivation for their economic livelihoods.

However, it stipulates that “supportive measures…will be conditioned to…agreements on substitution and no-replanting,” implying that cultivators would be required to cede their earnings from crop cultivation before they see the benefits of alternative crops.

Experience in Latin America has shown that conditioning assistance on total eradication harms the chance of developing lasting alternatives, as cultivators lack a successful bridge between when the cultivation of crops for the illicit market ends and alternative livelihoods become sustainable.

Not surprisingly in these circumstances, many growers return to the cultivation of coca and poppy crops. A more effective model would be to offer a phasing out period and/or subsidies to cultivators until meaningful alternative livelihoods are actually in place.

Yet while proper sequencing on reducing crops for the illicit market will need to be reviewed, the parties get it right on local involvement. Opting for what one Colombian analyst described as “building the state from below,” the development programme would rely heavily on, and actively engage with, local communities to ensure their participation – and hence the programme’s sustainability.

The most monumental point came with the government’s concession to de-prioritise -though not entirely retire – the destructive and ineffective aerial herbicide spraying of coca crops, opting first for alternative development and manual eradication before spraying crops.

In more than a decade of its use in Colombia, aerial spraying has served only to disperse coca crops, destroy poor farmers’ livelihoods, and engender local distrust for government authorities, as the only contact many communities have had with the state has been the occasional visit of a plane spraying crops.

The agreement also addresses drug consumption, an issue generally thought to be outside the purview of the peace talks. While details here are scant, linking this issue to the peace talks will help continue regional debates on drug policy reform. Recognising that drug policy should be based on respect for human rights and public health is a valuable contribution.

But a full agreement, if eventually signed, will not be a panacea. Taking the FARC out of the cultivation and trafficking business will not independently solve the drug issue or the associated violence.

As long as there is worldwide – and particularly U.S. – demand for drugs, criminal organisations will find a way to supply them. Furthermore, an accord will likely leave a power vacuum in rural regions of the country as the FARC demobilises and cedes those territories.

There is a good chance that right-wing paramilitary successor groups and criminal gangs will try to fill it. Establishing a positive state presence and providing basic services will be a major challenge, especially in regions where the armed forces have been the primary face of the state.

Because of these continued challenges, the United States has an important role to play in the implementation phase, both in supporting Colombia financially and in granting the Colombian government political space to implement the accords – even when they contradict U.S. policy priorities.

A State Department communiqué on the drug policy agreement, which highlights the continuation of forced eradication, raises questions about whether the United States will help or hinder the advancement of the peace process.
Nearly two of every three aid dollars destined for Colombia goes to the public security forces. Will the U.S. government be willing to shift aid to build peace rather than continue war?

After decades of waging a largely ineffective “war on drugs” in Colombia, will the United States allow its long-time ally to break with the prohibition-focused model and explore alternatives to the current militarised approach? Some of the most revolutionary agreements in the accord, such as all but ending aerial spraying, would challenge the existing U.S. approach.

These questions, and the many more that will be raised as the talks progress, will likely dismay hardliners in the U.S. government who are not ready to shift drug control tactics.

But with little progress to show after decades of violence and billions of dollars spent, the Colombian and FARC negotiators have made an important step toward ending decades of violence. The United States should stand ready to support Colombia, both financially and politically, in the coming months and years – and it should know when to stand down.

Adam Schaffer is an analyst with the Drug Policy and Colombia programme at the Washington Office on Latin America (WOLA), which promotes human rights, democracy, and social justice by working with partners in Latin America and the Caribbean to shape policies in the United States and abroad.  Gimena Sanchez is a Senior Associate for the Andes at WOLA. This article was originally published by Foreign Policy in Focus.