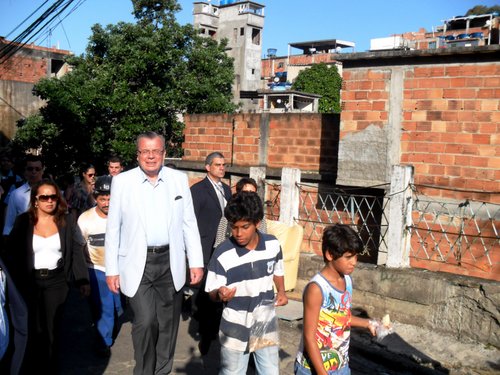 RIO DE JANEIRO, May 10 2013 (IPS) - Tuchinha was once a drug lord in Rio de Janeiro’s Mangueira favela. But today he is helping youngsters in this Brazilian city turn their lives around and leave behind crime, prison and the likelihood of an early death.

Franciso Paulo Testas Monteiro, better known as Tuchinha, climbed to the heights of the criminal world. Because he could read and write – he went to school through the fifth grade – and was good with numbers, he was put in charge of the accounts of one of Rio de Janeiro’s main criminal bands.

He became an almost mythical figure in the world of organised crime as the drug baron of Morro da Mangueira, a violent shantytown where drug traffickers held sway. Half of his life – 25 years – was dedicated to the drug trade.

He had plenty of ready cash, women and other perks. But in his ascent, he paid a high price. He spent a total of 21 years in prison, serving two different sentences, and both he and his family lived with death threats.

Today, at 49, he says he is repentant. “I grew up in Mangueira, I was a leader,” he told IPS. “I had money, women, jewels, but I didn’t have freedom. When I ventured outside my neighbourhood, I had to hide, or else I had to actually leave Rio. If I had had an opportunity to do so, I would have changed my life earlier.”

It was Aug. 5, 2011 when he left drug trafficking behind forever, after he was invited by the local NGO AfroReggae to give workshops to help young people leave behind a life of crime.

“I did many bad things, and gave orders for many others to be committed,” he said. “I paid heavily for it, with my freedom. Today my role is to rescue those who want to leave crime behind, and I am the living proof that a life lived in peace is worth it.”

Tuchinha visits prisons to talk to young inmates, and he helps mediate in conflicts in violent neighbourhoods.

“We want to give the same opportunity I had to people who want to get back on track, abandon crime, and live in peace with their families. Many of them feel hopeless, but I tell them there is hope.”

The former drug boss is an advocate of amnesties for prisoners, so they can have a chance to begin a new life.

He is confident that he will be able to finish school, and hopes to live in a safer city, for the sake of his children.

Tuchinha works to convince young drug dealers and traffickers to join AfroReggae’s “employability” programme. Created in 2008, the programme has so far managed to find jobs for more than 3,100 people.

Daniela Pereira da Silva, 35, spent three years in prison and is now one of the programme coordinators.

“I form part of the statistics on women, which show that most women in prison are there because they had a boyfriend or husband who was a drug trafficker,” she told IPS.

The aim of the programme, she said, is to help ex-convicts enter the labour market. “Demand has been strong, and we’re also open to residents of communities where drug trafficking groups operate, and to relatives of ex-convicts, to boost family incomes and keep them from falling back into crime,” she said.

Tuchinha and Silva formed part of the group of former drug traffickers supported by AfroReggae who met with the executive director of the United Nations Office on Drugs and Crime (UNODC), Yury Fedotov, on his first official visit to Brazil, May 7-9.

The meeting, which was attended by IPS, took place in AfroReggae’s main offices in the Pavão-Pavãozinho favela or shantytown, situated behind the world-famous Ipanema beach.

Pavão-Pavãozinho is one of the favelas “pacified” by the authorities under Rio’s strategy of regaining state control over areas ruled by armed drug gangs, by means of a heavy, permanent police presence combined with increased spending in the areas of health, education, sports and income-generating activities.

Fedotov visited the city to learn first-hand about the social and public security programmes underway in Rio’s favelas. “I came to Brazil to see how successful experiences of combating crime in Rio de Janeiro could be adapted to other places with similar security issues,” he said.

He added that the favela pacification project was apparently working, and said it was the first time he had seen anything like it and he was “very impressed”

“Such initiatives are enormously instructive for UNODC as they can provide a roadmap on how to reintegrate ex-traffickers in an effective and creative way as part of overall crime prevention interventions,” he said.

The Russian diplomat said he could see the changes since he visited Rio 10 years ago. He also expressed his admiration for the people who had the courage to leave behind a life of crime.

Mangueira and Pavão-Pavãozinho are two of the 32 favelas in Rio de Janeiro pacified by the police. The authorities’ goal is to set up a total of 40 police pacification units (UPPs) in the city’s poor neighbourhoods by 2014.

At least one million of the six million people in Rio proper (Greater Rio has a population of 11 million) live in some 750 favelas, a number of which are still ruled by drug gangs.

“Our policy used to be focused on repression, which generated more conflicts and deaths,” the commander of the local UPP, Major Felipe Magalhães dos Reis, said at the meeting in Pavão-Pavãozinho. “The police didn’t tackle the causes of violence, but its effects. Meanwhile, criminals had increasingly powerful weapons.”

The cost of the “war on drugs” was high in terms of loss of life, he acknowledged.

“There was no solution in sight, until the idea of creating the UPPs emerged,” Magalhães dos Reis said.

“Social inclusion and community development are essential components in preventing crime,” Fedotov said, adding that the experience could be adapted to other countries, especially the elements of social integration, pacification and alternative means of life.

Brazil is a transport point for the international drug trade. In addition, internal consumption has spiralled and it is now a major market for drugs.

During his visit this week, Fedotov met with government officials to discuss future cooperation, in regional and global associations.

In Brasilia, he told reporters that Brazil was a global actor, and that UNODC was interested in its support and participation in global issues like the fight against transnational organised crime and illegal drugs.