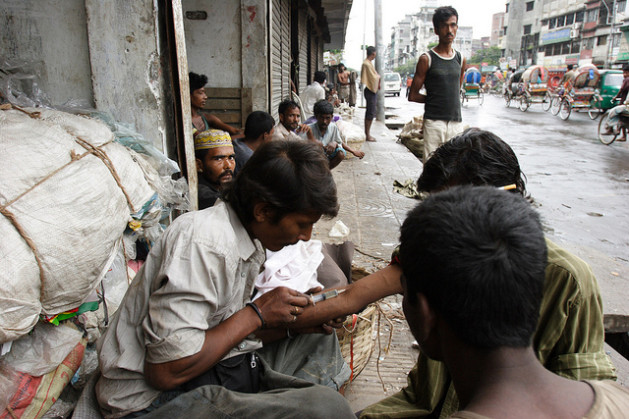 The document, first publicised by the Guardian and obtained by IPS, contains over 100 specific policy recommendations and proposals from member states, many at odds with the status quo on illicit drug eradication and prohibition.

“Countries feel real pain. But they are being told they should strengthen interdiction.” -- Guatemala's U.N. Ambassador Gert Rosenthal

It confirms a widespread belief that discontent is growing among national governments and in the corridors of New York and Vienna, where the leak originated from the U.N. Office on Drugs and Crime (UNODC).

In a candid proposal, Norway calls for “questions relating to decriminalization and a critical assessment of the approach represented by the so-called War on Drugs.”

“It’s not particularly news to me,” said Kasia Malinowska-Sempruch, director of the Open Society Global Drug Policy Programme. “What’s news is that we are talking about it.

“I think there is this sort of façade put up by the U.N. as a whole, which is ‘we are one big happy family’, but that hasn’t been true for years,” she told IPS.

As early as 1993, Mexico told the U.N. General Assembly in a letter that because “consumption is the driving force that generates drug production and trafficking, the reduction in demand becomes the radical – albeit long-term– solution of the problem.”

But despite recent moves in Latin America and Europe towards policies of harm reduction, U.N. reforms remain mired in mid-20th-century dogmas and perennial horse-trading between member states.

As prices drop for drugs that are purer by the year, governments continue to spend 100 billion dollars annually on enforcement measures. The U.N. estimates the illicit drug trade has grown to over 350 billion dollars per year. And by 2050, the number of illicit drug users is set to rise by 25 percent.

In 1998, at a special session of the General Assembly on eradication, Pino Arlacchi, the head of UNODC at the time, told attendees: “A drug free world – we can do it.”

According to a BMJ study, in the U.S., a longtime proponent and alleged ghostwriter of U.N. drug conventions on interdiction, the average prices of heroin, cocaine and cannabis all decreased by over 80 percent between 1990 and 2007, while their purities increased.

BMJ found that “during this time, seizures of these drugs in major production regions and major domestic markets generally increased,” concluding “expanding efforts at controlling the global illegal drug market through law enforcement is failing.”

In the U.S. alone, drug law enforcement is estimated to have cost over one trillion dollars during the past 40 year. Since 1980, the number of prisoners incarcerated for drug offences has risen dramatically, from 40,000 to around 50,000 today.

“For 40 years we’ve been doing this,” says Terry Nelson, who served in Latin America as a U.S. Border Control and Customs Service Agent. “It’s [drugs] cheaper than it was, higher purity and far easier to get than at the beginning of the drug war.”

In the document, Switzerland notes “with concern that repressive drug law enforcement practices can force drug users away from public health services and into hidden environments where the risk of overdose, infection with hepatitis C, HIV and other blood-borne diseases become markedly elevated.”

Switzerland elsewhere voices support for the Organisation of American States (OAS), which this year proposed alternative forums for discussions of international drug policy. The OAS has been outspoken on the damage that drug traffickers – attracted by voracious North American consumption and potentially huge profits – have wrought on large swaths of Latin America.

In September, Guatemalan President Otto Perez Molina told the U.N. General Assembly “we have clearly affirmed that the war against drugs has not borne the desired results, and that we cannot continue doing the same waiting for different results.”

Among the recommendations, Ecuador asks that “special efforts are made in order to achieve significant reduction of demand” and that enforcement measures are completed “with full respect for sovereignty and territorial integrity of States, the principle of non-interference in the internal affairs of states and human rights.”

“Countries feel real pain,” Gert Rosenthal, Guatemala’s U.N. representative, told IPS. “But they are being told they should strengthen interdiction.”

Such documents are whittled down, behind closed doors, into unified policy recommendations. In this case, a consensus statement will be presented at the High-Level Review by the Commission on Narcotic Drugs next March in Vienna. That meeting will set the stage for a Special Session of the U.N. General Assembly in 2016, when member states are expected to outline an updated drug policy for the next decade.

The consensus process, which can give outsized control to already powerful pro-interdiction countries like Russia and the U.S., has come under criticism, says Tom Blickman, a research at the Transnational Institute in Amsterdam.

“If one country is blocking reform, they can be successful,” Blickman told IPS. “Countries are tired – it shouldn’t be this way.”

In negotiations, the EU speaks on behalf of all its members, further homogenising opinion, says Malinowska-Sempruch. “The voice of Portugal and other more progressive countries get drowned out because they are part of a bigger block.”

A spokesperson for UNODC told IPS it had a policy of not commenting on draft documents and would not speak about the consensus process.

Since the heavily U.S.-influenced 1961 Single Convention on Narcotics laid the groundwork for the modern “war on drugs,” countries have struggled to navigate its legal obligations. Much as later conventions led to the normalising of individual drug testing, the agreements in effect required countries to practice virtual total prohibition in order to gain acceptance internationally.

Today, most countries still schedule drugs based on guidelines set in 1961 and in the 1971 Convention on Psychotropic Substances.

Under the 1961 convention, certain plants and their derivatives are considered prima-facie illegal. But under the 1971 convention, which applied to psychoactive and pharmaceutical drugs mostly produced in Western countries, prohibition only follows proof of a drug’s danger. The disparity means that in the eyes of international law, chewers of cocoa leaves in the Andes are considered as aberrant as Oxycontin or methamphetamine abusers in the United States.

“Certain drugs have been demonised and it’s hard to turn the clock back,” said Blickman.

A Boon for Prisons?

In its 2010 annual report, Corrections Corporation of America warned investors that any changes to laws “with respect to drugs and controlled substances or illegal immigration could affect the number of persons arrested, convicted, and sentenced, thereby potentially reducing demand for correctional facilities to house them.”

In the U.S., the Anti-Drug Abuse Act of 1986 had introduced mandatory minimum sentences for drug crimes, assuring a nascent private prison industry with a steady flow of inmates. And a final 1988 U.N. convention required signatories to criminalise the possession of drugs included in the previous conventions, overnight creating a global criminal class of drug users.

In its draft recommendations from the leak, the U.S. reasserts the three conventions “remain the cornerstone of the international drug system.”

How far, how quick?

For countries like Uruguay, where marijuana decriminalisation awaits only a procedural Senate vote, skirting the agreements can be a delicate game of geopolitical chicken.

The International Narcotics Control Board (INCB), a quasi-judicial organisation charged with keeping tags on countries’ compliance with the three agreements, threatening the proposed law “would be in contravention of the 1961 Convention on Narcotic Drugs.”

“Looking at Switzerland, or Germany that has heroin injection sites, or Netherlands with coffee shops, or Portugal or Uruguay, it is clear there are countries that think there should be different policies,” said Malinowska-Sempruch.

But while these countries may make headlines – Portugal removed all penalties for drug users in 2000 – smaller states fear offending the likes of the U.S. and Russia, perennial aid sources and holders of Security Council veto power.

Under U.S. law, the Department of State must every year publish a report that includes evaluating whether foreign aid recipients meet the “goals and objectives” of the 1988 agreement.

“Not that many care about drugs enough to fight so hard and make enemies, because they know they will need those votes for what they really care about,” said Malinowska-Sempruch.

Most UNODC funding comes from member states, which can attach strings to “special-purpose funds.”

This means countries can maintain both private and public stances on drug policy. Switzerland, which began offering heroin-assisted treatment for addicts in 2008, backtracked this week in a press statement that stressed the leaked document was part of a “brainstorming” session and that it “does in no way support any efforts or attempts of changing the three U.N. Drug Conventions as they are today.”

As for 2016, Blickman says it’s important the special session be organised not just by UNODC but also by the U.N.’s human rights and development arms.

But while the session could prove a pivotal turning point, activists also say reform will likely first come out of piecemeal efforts to disentangle the conventions’ cascading legal web. Because the agreements exist in so far as countries enforce them, simply ignoring their mandate could as effective as anything else.

“There is leeway in the convention,” says Blikman. If countries start flouting them, the “INCB couldn’t do anything except maybe not allow certain (pharmaceutical) drugs into the country.”

If that trend continues, an ignored INCB could eventually be relegated to the scholarly study of an historical document.