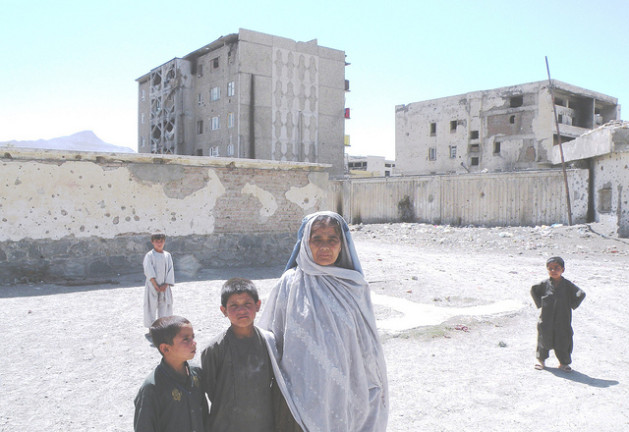 KABUL, May 24 2013 (IPS) - Located on a narrow street in a quiet neighbourhood in Kabul, the Sanga Amaj Women’s Treatment Centre is the only one of its kind in Afghanistan: named after the 22-year-old journalist who was assassinated in 2007, the facility caters exclusively to Kabul’s massive population of female drug addicts.

Out of respect for its residents’ privacy, the centre does not disclose its location and strictly monitors all visits. Here, a kind and professional staff dressed in white aprons attend to 25 women and an equal number of children between the ages of five and 11who spend most of their time in a cosy playroom filled with toys.

The entire facility is split between two floors, housing dormitory-style rooms with 12 beds each and an array of common rooms.

The clean, pleasant settings belie the desperate circumstances of the building’s occupants.

Most of the women here say they started out using opium and hashish, but turned to harder drugs like heroin in order to cope with “economic hardships, family violence, or psychological problems,” Storai Darinoor, one of the young coordinators at the facility, told IPS.

“In many cases husbands introduce their wives to drugs, often forcibly. When either one of the parents are addicts, the children generally become addicts, too,” she added. Women and children tend to favour oral intake of drugs, either eating or smoking their fix, but one 11-year-old in the centre was found to have been using injections.

Though the female residents declined to speak with IPS, staff members said that patients have admitted to taking heroin as “medicine” to ease the stresses of daily life.

“Young children are fed opium by their mothers to keep them quiet, while older children, in addition to consuming drugs themselves, provide drugs for their mothers,” according to Storai.

She says 80 percent of female addicts turned to drugs upon returning to the country from Iran and Pakistan, where they lived as refugees during the Taliban’s reign from 1996 to 2001.

The Sanga Amaj Centre receives funding through the drug advisory programme of the Colombo Plan – a U.S.-backed regional initiative designed to coordinate strategies for reducing demand and supply of narcotics in Asia – but only enough to provide the most basic therapy.

“After that we proceed to administering daily doses of buprenorphine (a semi-synthetic opioid) since we do not have access to methadone.” When this is inadequate to stop severe withdrawal symptoms – crying, screaming or beating their heads against a wall – staff members resort to “water therapy”: short, cold showers that help patients to relax.

After the first 10 days, medication is limited to daily doses of vitamins. The rest of the time in the facility is spent on rehabilitation, attending awareness sessions on the harmful effects of drug use and classes on different subjects including health, psychology and religion, “because drug use is forbidden in Islam,” Mansouri said.

The women then move into a three-month vocational programme, learning sewing and computer skills, which open up employment opportunities once they leave the centre.

One of the facility’s 12 staff members is then assigned to “follow” the women for a two-year period, making weekly house visits, offering support or advice, and providing counselling free of charge.

Not all of the women have a place to go after being discharged. Some are abandoned by their families as a result of their addiction and have no way of supporting themselves. Whenever possible, the centre hires its old patients to work as cleaners in the facility.

To date, the centre has treated over 1,100 women, of which “only 145 have relapsed,” according to Storai.

But the vast majority of women in Afghanistan have no access to such treatment, and often live out their days in a cycle of violence and poverty made worse by their addiction.

According to a survey conducted by the United Nations Office on Drugs and Crime (UNODC) in 2010, the last time such data were gathered, roughly one million Afghans between the ages of 15 and 64 were addicted to drugs, or three percent of the population of 35 million.

Experts attribute these dismal figures to numerous factors, including a 40-percent unemployment rate and an increase in poppy cultivation: in 2012, an estimated 154,000 hectares of farmland were dedicated exclusively to poppy.

The UNODC 2013 Afghanistan Opium Risk Assessment says cultivation in the main poppy growing areas – like the southern regions of Helmand and Kandahar, and northern provinces like Herat, Faizabad and Badakhshan – is expected to rise even further in the coming years.

The country, which used to supply about half of Europe’s heroin in 2001, now accounts for a full 90 percent of the global supply of opiates, making it the world’s largest producer by far. An estimated 26 percent of the country’s GDP comes directly from the narcotics trade, which the U.N. report says is “strongly” linked to economic insecurity and a lack of agricultural aid.

Though Afghanistan has a long history of opium use, with many families in the north taking moderate doses in order to work longer hours, addiction levels did not reach such heights until the U.S.-led invasion in 2001 forced warring mujahideen groups out of the cities and into rural areas, where they took over vast poppy fields and established “production centres and laboratories along the northern border,” Dr. Tariq Suliman, director of ‘Nejat’, one of the few drug rehabilitation centres in Kabul, told IPS.

Located in the impoverished Karte Char neighbourhood in western Kabul, Nejat sits in the middle of a huge concentration of drug users, who congregate in parks, crouch under bridges or trees, or even just sit in the middle of the road to get their fix.

While heroin is the most widely used drug – available at virtually every street corner for six dollars a gramme – hashish and opium are also readily available. For a population with an average income of just 500 dollars a year, this is a steep price to pay, and often pushes families deeper into poverty.

The government’s ministry of counter narcotics has no funds with which to implement prevention, treatment or rehabilitation programmes, leaving the onus for this work entirely on the shoulders of civil society, laments Suliman.

Experts say women bear the brunt of addiction, partly because religious and cultural taboos preventing women from consuming drugs mean that few actively seek treatment for fear of being stigmatised.

Female drug addicts here are a kind of “hidden population”, secreting themselves away in their homes, which, in turn, breeds a culture of violence against children and pushes the latter closer towards addiction.

Experts say that unless the government allocates more money for the creation of facilities like the Sanga Amaj Centre, the thousands of female addicts have no hope of a better future.