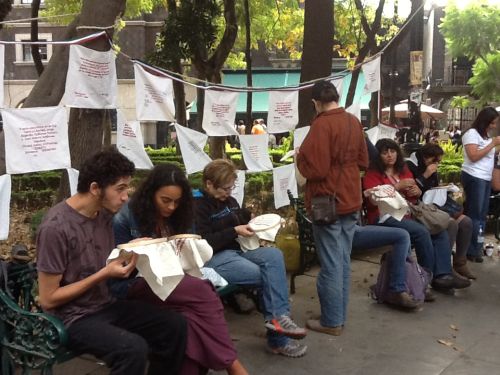 MEXICO CITY, Nov 29 2012 (IPS) - Each scarf represents a life cut short. Each stitch, a tear. Each thread, a cry of frustration about death and impunity.

The Mexican hands embroidering for peace belong to mothers searching for missing sons and daughters, people demanding justice for their brothers and sisters, and students, teachers, activists and artists showing their solidarity.

Conservative Mexican President Felipe Calderón, who hands over power on Saturday Dec. 1 to Enrique Peña of the Institutional Revolutionary Party (PRI), is facing criticism from activists regarding his human rights record.

But one protest stands out for its moral force: a string of thousands of white scarves embroidered with the names and stories of people who have been killed or have gone missing in Mexico since Calderón began to wage his war on drugs after taking office in December 2006.

“We want to send off Calderón with the pain that he has caused thousands of families,” one of the organisers of the embroidery project, Leticia Hidalgo from the northern city of Monterrey, told IPS. “Because (the measures taken by his government) totally destroyed my family, and changed our lives, and only the love for my son has kept us going.”

Her son Roy Rivera, a philosophy student at the Autonomous University of Nuevo León, was kidnapped on Jan. 11, 2011. His family paid the ransom, but he never returned. He was just about to turn 19.

Hidalgo embroidered on her scarf: “My boy, I put you in the hands of God. We’re waiting for you to come back soon, very soon. Stay strong. Your mama and Richi.”

The white scarves memorial will be set up in the Alameda Central, a park in Mexico City, with the scarves embroidered by hundreds of hands over the past 15 months in dozens of towns and cities around the country and abroad.

Some carry painful messages from parents and other family members. Others tell stories salvaged from oblivion by anonymous hands.

“15th of January. NL. Two women lose their lives in a shootout in Balcones Altavista. Embroidered by: Another woman”, reads one scarf hanging in Coyoacán square in the capital.

The idea of embroidering scarves as an act of protest came from Fuentes Rojas (Red Fountains), a group of artists who have dyed the water in fountains red to protest the blood shed by the government’s militarised security strategy.

The activists first began to embroider scarves in their meetings. In August 2011, during a day of artistic and cultural activities organised by the Movement for Peace and Justice with Dignity, they held their first collective embroidering session in the Zócalo, Mexico City’s central square.

After that, they held such gatherings every Sunday in Coyoacán square, in the south of the capital, and next to the Torre Latinoamericana in central Mexico City.

“We wanted to raise public awareness about this enormous tragedy, using the symbolic gesture of stitching up these broken stories that have been caused by the violence,” Elia Andrade, an artist, told IPS.

“We embroider for everyone, and what we put on the scarves is basically the information that we manage to find: the name, how and when they died, and who made the scarf. But it’s completely different when it’s stitched by a family member,” she said.

“That’s why every group started to do things a little differently, when the idea caught on and began to spread.”

For example, the women in Nuevo León, one of the Mexican states with the largest number of victims of forced disappearance, switched from red thread representing people who were killed, to green thread, to represent their missing sons and daughters.

“Green is the colour of hope, that we are going to find them,” said Hidalgo, who has been meeting with a group of women since March to embroider outside the Monterrey city hall. They now have 200 scarves embroidered, because every week, new people show up, who are searching for a missing loved one.

One of the biggest and most active groups is in Guadalajara, the capital of the western state of Jalisco.

“Embroidering a scarf is an act of love, of acknowledgement,” Teresa Sordo, one of the organisers of the group that meets every Sunday in Guadalajara’s Rojo park, wrote in the blog “Bordamos por la paz” (Embroidering for peace).

Many of the names and stories embroidered on their scarves are taken from a list titled
“Menos días aquí” (Fewer Days Here), an initiative of the group Nuestra Aparente Rendición (Our Apparent Surrender) which, based on newspaper reports, has started counting the number of people killed in the country every day.

“We embroider, perhaps, because a few hands can transform things and we need to transform them into beautiful things because so many hands are already doing appalling, unmentionable, incomprehensible things,” Sordo wrote.

Indigenous people forced to flee the community of San Juan Copala, in the southern state of Oaxaca, embroidered scarves for 28 of their people who were killed. Several native communities in Michoacán also sewed scarves for their dead.

In Guatemala and Nicaragua, scarves were stitched for the 72 migrants slaughtered in Tamaulipas in August 2010.

And in Mexico City, scarves were embroidered for the 49 children who died in a June 2009 fire in a day care centre in Sonora.

Other hands have started to embroider in Coahuila, another one of the states with the highest numbers of missing persons, and in Morelos, Puebla, Chihuahua, the state of Mexico, as well as countries like France, Germany and Japan.

The white scarves will form a memorial – a request that the victims expressed to Calderón during public talks s he held with representatives of the peace movement in June 2011.

But the only result of the talks was the construction of a mausoleum for soldiers killed, and a controversial construction that the government calls the “Memorial for Victims”, built in the Campo Militar, a military installation in Mexico City.

With skilled hands, María Herrera from Michoacán sews in red thread the name of one of the thousands of people killed during the six-year term of Calderón, who belongs to the National Action Party, which 12 years ago put an end to seven decades of government by the PRI, the party that is now returning to power.