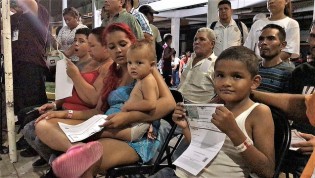 By Daniela Pastrana
Ángel Santiago is a Mexican teenager who speaks one of the variations of the Zapotec language that exists in the state of Oaxaca, in the southwest of Mexico. Standing next to the presidential candidate who is the favorite for the July elections, he calls for an educational curriculum that "respects our culture and our languages."

By Daniela Pastrana
The areas under the low bridges over a section of the canalised channel of the Tijuana River that runs along the border between Mexico and the United States have become enormous open-air toilets.

By Daniela Pastrana
“In the long term, what benefit will regulation of the autodefensas [self-defence groups] bring us? Do you think I have an aptitude or professional vocation for police work?” asked Juan Carlos Trujillo, a peace activist in the Mexican state of Michoacán.
Next Page »
ADVERTISEMENT ADVERTISEMENT