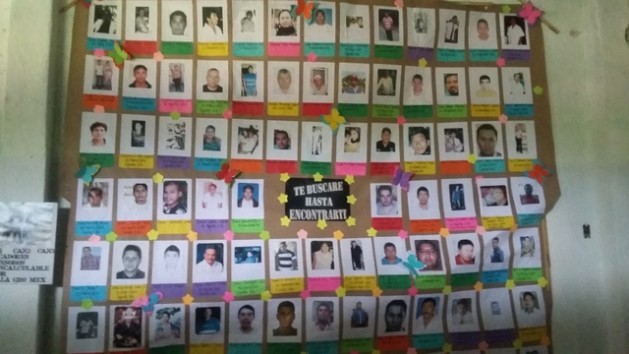 The photos of victims of forced disappearance in the southwestern state of Guerrero hang on the walls of the San Gerardo parish soup kitchen, in the city of Iguala. Credit: Daniela Pastrana/IPS

IGUALA, Mexico, Sep 24 2015 (IPS) - The soup kitchen of the San Gerardo parish in the southwestern Mexican state of Guerrero has become a memorial to horror. Long rows of photos have been hung on the walls of the large hall – the faces of dozens of people who were “disappeared”, abducted, extracted from their lives without a trace.

Most of them are from the northern part of Guerrero, the poorest state in Mexico and one of the hardest-hit by violence. The database of the organisation searching for missing loved ones includes 350 ‘desaparecidos’, and every week new names are added.

Over the past year, this parish church in Iguala has offered a safe meeting place every Tuesday for families who have overcome their fear of speaking out and searching for their ‘desaparecidos’ in the clandestine cemetery which was discovered in the hills surrounding this city after the Sep. 26, 2014 disappearance of 43 students from the rural teachers college of Ayotzinapa.

That night, the students were attacked by the Iguala municipal police and – as is now known thanks to a meticulous investigation by a group of experts appointed by the Inter-American Commission on Human Rights (IACHR) – there was a concerted action by different security forces, including the military and federal police, which lasted a number of hours and took place in at least nine different locations.

Municipal police executed five civilians, including two students, while another student was tortured and killed, his body appearing hours later next to a garbage dump.

Another 43 students, most of whom were in their first year of teachers college, were seized and taken away.

Saturday Sep. 26 marks the first anniversary of their disappearance. But the remains of only one student have been found – a burnt corpse in a plastic bag – while the possible discovery of the remains of a second student is now being investigated.

There is no trace of the rest of the missing students.

It also revived the pain surrounding the 30,000 ‘desaparecidos’ left, according to human rights groups, by the militarised security strategy launched by former president Felipe Calderón in January 2007.

Enrique Peña Nieto, president since December 2012, kept his predecessor’s hard-line security policy in place. But its effects have become largely invisible due to a media strategy focused on promoting constitutional reforms that have opened up the energy and telecommunications industries to private investors.

In its first year alone, the Peña Nieto administration invested nearly 500 million dollars in official advertising, according to a joint study by the FUNDAR Centre for Research and Analysis and the Mexican office of Article 19, a London-based human rights organisation that focuses on defending and promoting freedom of expression and freedom of information.

But the levels of violence have not come down. According to a report by the newspaper El Universal, published ahead of the anniversary of the disappearance of the teachers college students, more than 5,000 ‘desaparecidos’ were reported by public attorneys’ offices around the country in 2014 – 14 a day.

Another area heavily affected by the problem is the northern state of Nuevo León, where 31,000 bone fragments have been found on a ranch since 2011, leading to the identification of 31 missing persons.

“The difference is that now, human rights defenders and members of organised social movements are being targeted for human rights violations,” Héctor Cerezo, who has documented forced disappearances of fellow human rights and social activists over the last four years, told IPS.

Since Peña Nieto took office, “we have documented 81 human rights defenders who became victims of forced disappearance; under Calderón we documented 55. In total that’s 136 missing defenders since 2006 – cases in which it has been documented that they were taken away by agents of the state.

“That might seem like a small number in the universe of thousands of ‘desaparecidos’, but it indicates a stepping up of the Mexican state’s social control strategies,” the activist said.

The report “Defending human rights in Mexico: political repression, a widespread practice”, presented Aug. 27 by the Cerezo Committee Mexico and the National Campaign Against Forced Disappearance, listed 860 human rights abuses against social and human rights activists between June 2014 and May 2015.

The incidents include collective abuses, against 47 civil society organisations and 35 communities, and a rise in arbitrary detentions, which nearly doubled.

These included arrests during a protest by seasonal farm workers in the northern state of Baja California, who work in slavery conditions, and teachers’ protests ahead of the June legislative elections, in Guerrero and the southern state of Oaxaca, where two demonstrators were killed.

Héctor Cerezo of the Cerezo Committee said the disappearance of the teachers college students from Ayotzinapa occurred in the context of this strategy of social control.

“The brutality, the scale of the aggression, and the fact that the government would assume such a huge political cost cannot be explained if it was merely part of a drug affair. Their disappearance was meant to serve as a lesson for the human rights and social movements,” he said.

In any case, the brutal attack on the students drove home the gravity of Mexico’s human rights crisis.

Journalistic investigations have documented at least 80 extrajudicial executions committed this year by the army and the federal police in three supposed “shootouts” with organised crime groups in the central states of México and Michoacán.

In Iguala, civilian brigades searching for the remains of missing family members in the hills around the city have found 104 bodies in clandestine graves, although only nine of them have been identified so far.

“It’s not just Ayotzinapa; the whole country is like this,” one of the members of the brigades, Graciela Pérez, told IPS. She has been searching for her missing daughter for three years now, in the south of Tamaulipas, 750 km north of Iguala, where she mapped – on her own – the location of 50 secret graves in January and February.

In response to the crisis, the IACHR has scheduled a Sep. 28-Oct. 2 on-site visit, as requested by human rights groups.

And in the legislature, four separate bills to create a law that would classify the crime of forced disappearance have been tabled and are awaiting debate.

“This is the first forced disappearance of a large group of people, members of a social movement, in contemporary Mexico,” says the Cerezo Committee report, referring to the disappearance of the students.

On Wednesday Sept. 23, the parents of the missing students began a 43-hour hunger strike, one day before meeting with the president.

And a Saturday Sep. 26 march is being organised in the Mexican capital, to demand the students’ reappearance and a solution of the case.