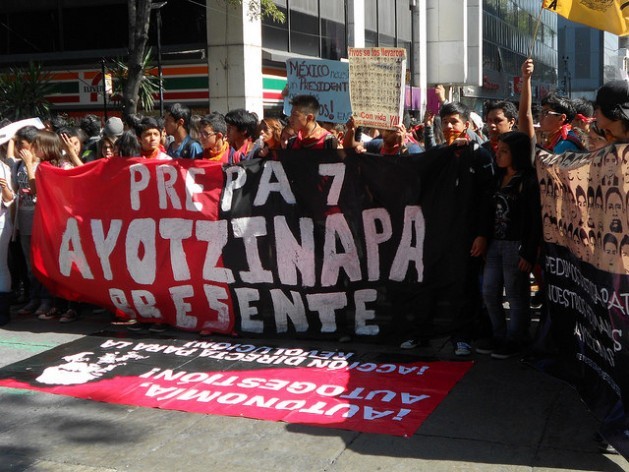 One of the numerous mass protests in Mexico demanding the reappearance of 23 students who went missing in Iguala. In the photo, young people demonstrate on Nov. 6 in front of the attorney general's office on the Paseo de la Reforma, in the capital. Credit: Emilio Godoy/IPS

MEXICO CITY, Jan 23 2015 (IPS) - The Mexican government will face close scrutiny from the United Nations Committee on Enforced Disappearances – a phenomenon that made international headlines after 43 students from a rural teachers college were killed in September in Iguala, in a case that has not yet been fully clarified.

Twenty-six human rights organisations have sent the U.N. Committee 12 submissions on the problem of forced disappearance, one of the worst human rights issues facing this Latin American country, where at least 23,000 people are registered as missing, according to official figures that do not specify whether they are victims of forced disappearance.

The submissions, to which IPS had access, say forced disappearances have taken on the magnitude of a humanitarian crisis since December 2006, when then conservative president Felipe Calderón (2006-2012) declared the “war on drugs” – a situation that his predecessor, conservative President Enrique Peña Nieto, has not resolved.

The organisations say forced disappearance is not adequately classified as a crime in Mexican law. They also complain about the lack of effective mechanisms and protocols for searching for missing persons and for reparations for direct and indirect victims, the impunity surrounding these crimes, the lack of a unified database of victims, and problems with the investigations.

In addition, they criticise Mexico’s reluctance to accept the competence of the Committee on Enforced Disappearances to receive and analyse communications from the victims.

The Committee, made up of 10 independent experts tasked with overseeing compliance with the International Convention for the Protection of all Persons from Enforced Disappearance, will hold its eight period of sessions Feb. 2-13 in Geneva, Switzerland.

During the sessions, Mexico “will be reviewed in a very critical light, because many recommendations have not been complied with,” said Jacqueline Sáenz of the FUNDAR Centre for Research and Analysis, one of the organisations that sent a report to the U.N. Committee.

The state has failed to implement an adequate public policy, Sáenz, the head of FUNDAR’s human rights and citizen security programme, told IPS. “Its responses have been minimal, more reactive than proactive. The balance is very negative.”

Although forced disappearance was already a serious humanitarian problem, the phenomenon leapt into the global spotlight on Sep. 26, when local police in the town of Iguala, 190 km south of Mexico City in the state of Guerrero, attacked students from the Escuela Normal de Ayotzinapa, a rural teachers’ college, leaving six dead and 25 wounded.

The police also took away 43 students and handed them over to members of “Guerreros Unidos”, one of the drug trafficking organised crime groups involved in turf wars in that area, according to the attorney general’s office.

The investigation found that the bodies of the 43 young people were burnt in a garbage dump on the outskirts of Colula, a town near Iguala, and that their remains were then thrown into a river.

On Dec. 7, prosecutor Jesús Murillo reported that the remains of one of the 43 students had been identified by forensic experts from the University of Innsbruck in Austria.

But on Jan. 20, the university reported that due to “excessive heat” from the fire, the charred remains of the rest of the bodies could not be identified, because of the lack of viable DNA samples.

Mexico’s office on human rights, crime prevention and community service has reported that in this country of 120 million people, 23,271 people have gone missing between 2007 and October 2014.

Although the office does not indicate how many of these people were victims of forced disappearance, its specialised unit in disappeared people only includes 621 on its list for that period, of whom 72 have been found alive and 30 dead.

“It’s important for the (U.N.) Committee to urge the state to specify the magnitude of the problem,” activist Juan Gutiérrez told IPS. “Very specific recommendations were made in reports long ago and the state has not fulfilled them. Public policies and reforms are necessary.”

More than 9,000 people have gone missing since 2013, under the administration of Peña Nieto, “which puts in doubt the effectiveness of policies for safety and prevention of the disappearance of persons,” said Gutiérez, the head of Strategic Human Rights Litigation I(dh)eas, a local NGO.

Forced disappearance has a long history in Mexico. In November 2009 the Inter-American Court on Human Rights ruled that the Mexican state was responsible for violating the rights to personal liberty, humane treatment, and life itself of Rosendo Radilla, a community leader in the municipality of Atoyac, who disappeared in 1974.

The Court ordered the Mexican state to conduct a serious investigation into his disappearance and to continue to search for him – none of which has happened.

In its submission to the U.N. Committee, Amnesty International says “the authorities have failed to explain, once again, how many of those people have been victims of abduction or enforced disappearance, and how many of them could be missing due to other reasons. No methodological information has been published, which makes it impossible for civil society organisations to scrutinise the figures.”

It adds that “impunity remains rampant in these cases.”

The rights watchdog notes that at a federal level only six convictions have been achieved, all of them between 2005 and 2009, for crimes committed before 2005.

With respect to the 43 students from Iguala, the attorney general’s office arrested over 40 police officers, presumed drug traffickers, the now former mayor of Iguala, José Abarca, and his wife, who have all been accused of involvement in the attack.

In their alternative report from December 2014, nine organisations said the Iguala case reflected “the current state of forced disappearances” and demonstrated “the ineffectiveness of the Mexican state in searching for missing people and investigating the cases.”

On Jan. 8, in an addendum to their submission to the U.N. Committee, four organisations stressed the “lack of capacity” and “tardy reaction” by the authorities in this case.

“The investigation was not conducted with due diligence. The Mexican state has been incapable of presenting charges and starting trials for the forced disappearance of the students,” says the text, which adds that the case demonstrates that Mexico’s legal framework falls short and that the authorities completely ignore the Convention for the Protection of all Persons from Enforced Disappearance.

On Nov. 27, Peña Nieto presented 10 measures, including a draft law on torture and forced disappearance and the creation of a national system for searching for missing persons.

But Sáenz said “The roots of the problem are not attacked. Mexico has to make a policy shift. The proposal is inadequate. We hope the Committee’s review will give rise to changes. Mexico has not managed to respond to this crisis.”

Gutiérrez said the new measures “are necessary but not sufficient. The law must be discussed with organisations and relatives of the disappeared.”

The Mexican state has not yet responded to the questions that the Committee sent it in September, ahead of the February review.