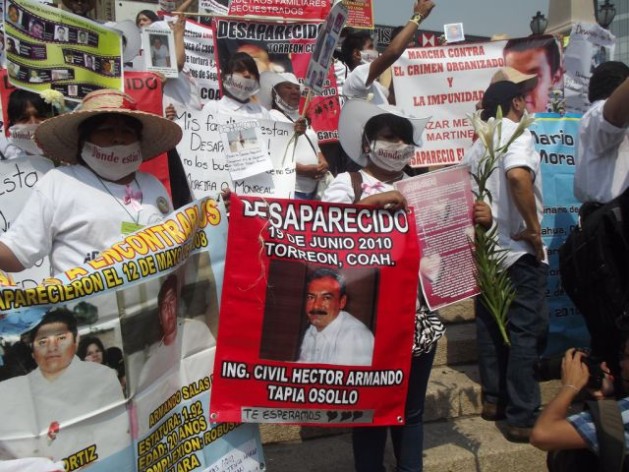 MEXICO CITY, May 14 2013 (IPS) - When people are forcibly disappeared in Mexico, it does not necessarily mean that the victims are immediately killed. In this country of entrenched violence, forced disappearance is also a method used to feed the markets for sexual exploitation and slave labour.

Mexico has regressed “to the barbarism of Roman gladiators,” lawyer Juan López, a legal adviser to Fuerzas Unidas por Nuestros Desparecidos en México (FUNDEM), a support group for families searching for their loved ones, initially in the northern state of Coahuila and now nationwide, told IPS.

In today’s Mexico, where organised crime is rampant and public security has been militarised, forced disappearances do not follow the pattern seen in past decades in this country and others in Latin America, marked by dictatorships, “dirty wars” against opponents and armed conflicts.

These days “just about anyone” is vulnerable, López said. An unknown proportion of the victims fall prey to “illegal businesses that produce lucrative profits from an unpaid slave labour force,” he said.

This includes the forced recruitment of teenagers and young adults as hired killers, workers in the production of drugs or to serve other needs of the cartels, or for organ trafficking.

“There have been confirmed reports of buses stopped by armed groups who take away all the young men,” López said.

The victims’ profile has changed, according to studies. At first the disappeared were men between the ages of 30 and 45; then the age range fell to 20-25 and again to 17-19. Now younger teenagers are also kidnapped, while the proportion of women has increased to the point where they make up half of all new disappearances, he said.

Human trafficking for labour and sexual purposes is currently flourishing in Mexico, and it is the third most lucrative illegal business in the world after drug and arms trafficking. The central Mexican state of Tlaxcala is the epicentre of networks that kidnap women in more than 20 districts, and also in border areas, and exploit them in cities in this country and the United States.

The International Organisation for Migration (IOM) says that 80 percent of the people trafficked in Mexico are women and girls. Mexico is the second country, after Thailand, for the number of trafficked women smuggled into the United States.

The victims, who are “picked up” in streets, towns and communities, are absorbed into “a human market,” and it is possible that many of them “are still alive,” López said.

During the six-year term of former president Felipe Calderón (2006-2012), 26,121 people were forcibly disappeared, according to the database published by the government of incumbent President Enrique Peña Nieto in late February.

However, the list does not include several well-known cases, their families confirmed, nor the information, however much or little, that was often gathered by the relatives themselves.

The stories are horrifying: young men forced to fight each other to death, or to dismember a woman alive, as acts of initiation and hardening of recruits. Groups of men forced to undertake training that only the fittest survive. Women tricked, enslaved and forced into submission by threats against their children.

Brenda Rangel, a 35-year-old member of FUNDEM, is looking for her brother Héctor, who was 28 years old when municipal police detained him in November 2009, along with two other men in Monclova, Coahuila.

“But they didn’t hand them over to any authorities,” Rangel told IPS. She found out what had happened to them because her brother managed to call her on his cell phone. “The police handed him over to an illegal organisation.” The next day she went to Monclova, and she has moved heaven and earth to find him. “My brother is alive,” she stated.

Rangel was one of the most eloquent speakers at the march organised by mothers of the disappeared from all over the country on Friday May 10 in the centre of the capital to demand that the government mobilise its resources to find them.

“There is no money available to look for ordinary people who have disappeared,” she declared in her powerful, broken voice.

Dressed in white, the mothers marched several blocks to the monument of the Angel of Independence, shouting slogans like “¡Hija, escucha, tu madre está en tu busca!” (Daughter, listen! Your mother is looking for you!).

Forty-three-year-old Lourdes Valdivia has heard nothing from her husband, 47-year-old José Diego Cordero, or their 22-year-old son Juan Diego, since December 2010 when they went hunting with eight friends and relatives. Municipal police detained them at a checkpoint near Joaquín Amaro, a municipality in the central state of Zacatecas.

On the pretext of checking their hunting permits, they locked them up in the police station, Valdivia said, wiping away her tears. Thanks to an underage boy who was released and an adult who was able to escape, Valdivia learned that “they took them out at night and handed them over to a group, presumably Los Zetas,” a notoriously violent criminal syndicate.

Other people are kidnapped for ransom, or because they have witnessed a crime, or they disappear because they were unwittingly caught in crossfire.

Systems engineer Juan Ricardo Rodríguez met up with his fiancée in September 2011 in a hotel in Zacatecas, where he was working, to finetune their wedding plans. As they were leaving, they saw an armed commando taking three men away. The couple tried to get away, but they were also seized.

Federal police, who spoke to the armed men, watched the entire event, Rodríguez’s mother, Virginia Barajas, who reconstructed the scene with the help of witnesses, told IPS.

There are reports of hundreds of people shut up in warehouses, safe houses belonging to crime syndicates, or isolated ranches in rural areas.

Other sources say it is likely that the disappeared persons are dead, as indicated by the mass graves that have been found. But some families have received remains that do not correspond to their loved ones.

The families of the disappeared always live in hope, said legal expert Santiago Corcuera, a member between 2004 and 2010 of the United Nations Human Rights Council’s Working Group on Enforced or Involuntary Disappearances.

But Corcuera described a number of different patterns of disappearances.

When the perpetrators are members of the public security forces, the victim will most likely be killed, he said. But there is “collusion, for instance, with sexual exploitation of women and girls,” or with other kinds of labour exploitation “in support of drug trafficking” and to swell the ranks of hired killers, he added.

In his view, the “law on victims” adopted by the Peña Nieto administration is “a beacon,” because it establishes reparations mechanisms. But protocols to search for disappeared victims are lacking; these should be coordinated between different Mexican states and with other countries in the region, he said.

FUNDEM’s López went even further: “The state does not carry out searches or investigations. And it opposes investigations by the families.”

According to Human Rights Watch, in many cases, official investigators have told families that the investigation’s progress depended entirely on the efforts of the families themselves.