MEXICO CITY, Jun 16 2011 (IPS) - Mexican economist Javier Morlett has virtually put his life on hold to search for his daughter Adriana, missing since Sept. 6, 2010. Since her disappearance, Morlett has reported her absence to the authorities and has organised marches and campaigns. 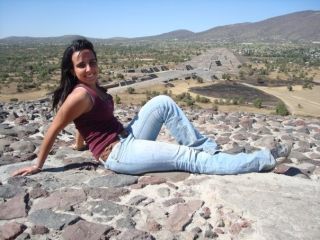 “We have had several leads, and one now looks promising,” said Morlett in an interview with IPS. He is optimistic that he may at last find his 22-year-old daughter, who is an architecture student at the National Autonomous University of Mexico (UNAM).

The lead points to Venezuela, where Adriana Morlett, a native of the Pacific coast resort city of Acapulco, is thought to be in the hands of an international sex trafficking ring, according to investigations.

The trafficking network apparently has tentacles in Colombia and Mexico, and traffics women to and from Mexico, which is regarded by human rights organisations as a source, destination and transit country for young women.

Adriana Morlett was living in Mexico City with her younger brother Javier and a cousin. She disappeared after borrowing a book from the UNAM library, and suspiciously, the book was secretly returned to the library a few days later.

The International Organisation for Migration (IOM) defines trafficking in persons as “the recruitment, transportation, transfer, harbouring or receipt of persons, by means of the threat or use of force or other forms of coercion, of abduction, of fraud, of deception, of the abuse of power or of a position of vulnerability or of the giving or receiving of payments or benefits to achieve the consent of a person having control over another person, for the purpose of exploitation.”

“Trafficking is a multifaceted, cross-cutting activity,” Miguel Ortega, head of the not-for-profit Antonio de Montesinos Centre for Social and Cultural Studies (CAM), told IPS. “There are many ways of recruiting victims. Mexico City is a transit point, because only a minority of the victims remains in the city, particularly for sexual exploitation.”

In Mexico, some 20,000 people a year are victims of human trafficking, according to the U.S. State Department.

Mexican authorities have identified at least 47 trafficking rings, which often combine human trafficking with trafficking of drugs and undocumented migrants.

In Latin America some 250,000 people are victims of trafficking at any given moment, generating estimated profits of 1.35 billion dollars for organised crime groups, according to the Mexican ministry of public security.

Organisations like the Coalition Against Trafficking in Women and Girls in Latin America and the Caribbean (CATWLAC) estimate that over five million women and girls have been captured by these criminal networks, and a further ten million are in danger of falling into their clutches.

The Coalition is currently searching for 20 missing Mexican women, girls and babies, and issued a red alert for the Morlett case Oct. 1, 2010. It has helped find 48 people in the region.

Morlett went to the Venezuelan embassy in Mexico City Wednesday to urge the Venezuelan authorities to find and rescue Adriana and dismantle the trafficking ring that is holding her.

This is not the first time a Mexican woman has been trafficked into Colombia or Venezuela. A 20-year-old student from the southwestern state of Michoacán who was studying in Puebla, a nearby state, was “recruited” and disappeared in May.

A few days later she was found and rescued at the border between Colombia and Venezuela. But at the airport in Bogotá, about to board a plane to Mexico in the company of her father, she gave him the slip and disappeared without a trace.

Over the last decade, 676 women have disappeared in Mexico, 64 percent of them between the ages of 10 and 24, according to the ministry of public security’s national register of missing persons.

In 2007 a law was passed in Mexico to prevent and punish human trafficking, and in January the government launched a national programme with the same aim.

In Mexico City, 106 people have been tried for human trafficking; last year there were 40 investigations by prosecutors, but only three convictions and sentences, according to the Attorney General’s Office for the Federal District of Mexico City. In 2009 and 2010, 61 women were rescued from trafficking rings.

“Victims do not have prompt, timely and effective access to legal remedy,” complained Ortega, whose organisation belongs to the Observatory against Trafficking in Persons for Sexual Exploitation in the Federal District, and recently released its report “Respeto de los derechos humanos en caso de trata de personas” (Respect for human rights in the case of human trafficking).

An assessment of the situation is urgently needed that includes all those involved in the trafficking system: victims, sex workers (not necessarily victims), traffickers and, importantly, the clients, without whom commercial sexual exploitation would be impossible, the Observatory report says.

“I am going to get my daughter back and reintegrate her into society. This will be a complex process, and she will need specialist help,” Morlett said.