MONTERREY, Mexico, Jul 19 2011 (IPS) - Chess player Roberto Galván, 33, was detained Jan. 25 by the police in the northeast Mexican state of Nuevo León as he sat on a bench in the central square of General Terán, a town 100 km from Monterrey. No one has seen him since. 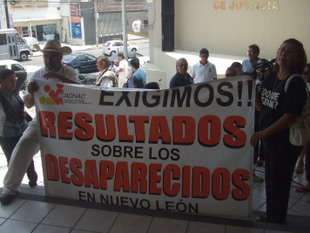 Families in Nuevo León demand to know what happened to their missing loved ones. Credit: Daniela Pastrana /IPS

The police did not register the arrest, which many people witnessed, and only admitted that they had detained him after Galván’s father pressured them. But they said that after he was questioned – although no reason for the questioning has been given – they dropped him off at a bus station.

“The only thing that is clear is that since the Nuevo León traffic police detained him, my son has been missing,” the father, who is also named Roberto Galván, told IPS.

Something similar happened to the family of Jeiu Abraham Sepúlveda, 24, who was taken into custody by the municipal police on Nov. 12, 2010 for committing a parking violation on a street in Monterrey, the state’s industrial capital.

When his wife called his cell-phone, Sepúlveda said he was being held at a municipal police station and that they would not let him make phone calls. He never answered his phone again.

His family spent three days visiting police stations, until a municipal police chief informed them that federal agents had handed him over to the navy. A video recording confirmed that the day he was arrested, Sepúlveda left the station in handcuffs, escorted by the federal police.

Only then did the police and navy admit that he had been detained. But they claimed he was released later that day, and left in a taxi.

Sepúlveda worked for a construction company, and had a five-month-old daughter.

“Why did they take him to the station instead of giving him a fine?” asks Verónica Sepúlveda, his older sister. “Why wasn’t he turned over to the judge? Why was he taken to naval installations? Why did the federal police who took him tell our lawyer a few days later that he was ok? Why isn’t there any record of the detention anywhere?

“I feel furious and impotent; if they’re supposed to be the ones protecting us, then who do I have to watch out for?” asks his sister, whose main focus in life has become the search for her brother. “They didn’t just kidnap him, they kidnapped an entire family. We are a family of eight brothers and sisters, and we only get together now to talk about the same thing,” she tells IPS disconsolately.

The issue of forced displacement has been put on the public agenda by the Movement for Peace and Justice with Dignity led by writer Javier Sicilia, which is opposed to the militarisation of the fight against the drug cartels declared by conservative President Felipe Calderón shortly after he took office in December 2006.

There are no official figures on this aspect of the spiralling violence in Mexico. The only institution that gives a clue to its scope is the National Human Rights Commission, an independent government body, which reported in April that it had received 5,397 reports of people who have gone missing since the start of the Calderón administration, and that nearly 9,000 dead bodies have never been identified.

But non-governmental organisations (NGOs) say the actual number of victims of forced disappearance could be as high as 18,000.

Many disappearances occur in front of witnesses. Hooded, armed men seize the victims from their homes or on the street. In some of the cases, the missing person has been taken away by the police, the army or the navy.

The United Nations Working Group on Enforced or Involuntary Disappearances stated in a preliminary report published Mar. 31 that more than 3,000 people were possible victims of involuntary disappearance since 2006 in Mexico

The Working Group asked the government to create a database and protocol for the search for missing persons.

An NGOs report to the Working Group states that unlike in the past, the people who go missing these days in Mexico are not social or political activists, but are suspected by government security forces of belonging to criminal organisations, or were caught up in the middle of military or police operations and subsequently disappeared.

Their families have put their lives on hold to make an endless round of police stations and offices, looking through files and photographs, combing the streets and holding protests. Along the way, they run across many other people in a similar situation.

Julia Alonso has repeatedly made the 1,300-km trip from the Pacific coast resort city of Acapulco in the south to Monterrey in the north in search of her youngest son, Julio Alberto López, who disappeared in January 2008 with three other youngsters.

López, who lived in Acapulco, was on vacation in Monterrey when he disappeared. His parents searched the area where he was last seen, reported his disappearance to the police, discovered that the four youngsters had been taken away by men in police uniforms, and took out a large ad in newspapers, addressed to the president. But no one has heard a thing about their son and the others who were taken away with him.

The problem for those who are searching for missing loved ones is that nothing is done to record information that could lead to the identification of unidentified bodies, in a country where an estimated 40,000 lives have been lost in the “war on drugs” since 2006, according to news outlets and social organisations.

The government says only one percent of the civilians killed in the vortex of violence are “innocent victims.” But local and international studies and investigations and the personal accounts collected by the peace movement led by Sicilia indicate that not only drug cartels are behind the disappearances and killings.

In Mexico there is no protocol for collecting information on missing persons, or for medical examiners to register information. Each state has its own system for identifying bodies, and neither fingerprints nor dental X-rays nor DNA samples are taken. The dead are simply buried as John or Jane Doe.

According to the most recent official statistics, since 2006 more than 150 clandestine mass graves have been found in 22 of Mexico’s 32 states, holding a combined total of 712 corpses of people presumably killed by drug cartels.

The recommendations of international bodies on collecting forensic evidence include dealing with human remains in a respectful and dignified manner.

But in the northwest state of Durango, for example, where more than 200 bodies have been found in the last three months, the exhumations have been done with a power shovel.

On Jul. 7, Javier Sicilia and former Mexico City ombudsman Emilio Álvarez presented files on 13 documented cases of disappearances to the Nuevo León chief prosecutor. After a meeting that lasted hours, the activists and relatives of the missing came out with long faces and the promise of another meeting, on Aug. 10.

“There will be no quick or easy solution, but we have to keep pushing,” Álvarez told the families. “We can’t let them hurt us further; they have already hurt us enough.”

The families have not given up hope. “I will not stop or rest until I have an answer,” Julia Alonso told IPS. “Nor am I going to hide. If this (the victims’ movement) can bring an end to the killings of young people in this country, I will be happy.”