MEXICO CITY, Feb 8 2013 (IPS) - “We will not stop fighting until there is justice for our children,” says Araceli Rodríguez, the mother of a young federal police agent in Mexico who disappeared along with seven other people in the western state of Michoacán on Nov. 16, 2009. 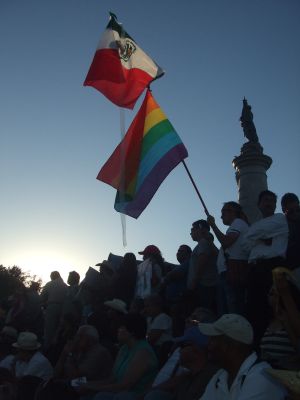 This woman is one of tens of thousands of relatives of the dead, disappeared and displaced by violence in Mexico, and she hopes to find support for finding her son, Luis Ángel León Rodríguez, in the General Law on Victims, which enters into force on Saturday, Feb. 9.

For the last two years, Rodríguez has been participating in the citizens’ Movement for Peace with Justice and Dignity (MPJD), created by poet Javier Sicilia.

Twenty months have passed since the MPJD demanded a law to help relatives left behind by violence in Mexico, at a mass rally in the northern city of Ciudad Juárez. The law, backed by the Office of the United Nations High Commissioner for Human Rights, was promulgated Jan. 9.

The big challenge is for it to be enforced and produce results, everyone agrees.

“Such a law should not have to exist,” Sicilia said the day it was promulgated. “It’s the consequence of not applying the laws that are made to protect and provide justice to citizens, and of a war that should never have happened.”

Since his son, Juan Francisco, was murdered in March 2011, Sicilia has toured the country and knocked on the doors of government offices, accompanied by hundreds of victims and fellow citizens in solidarity with them, who seek to end the security policy inherited from the government of former president Felipe Calderón.

In December 2006, when Calderón began his presidential term that ended Dec. 1, 2012, he declared war on drug trafficking cartels, militarised public security and conferred extraordinary powers on the federal police, whose personnel increased six-fold while their budget expanded from 800 million to three billion dollars.

As a result of the strategy, 60,000 people have been killed and 25,000 disappeared, according to official figures, although civil society organisations cite much higher statistics. A total of 250,000 people have been displaced and there are countless relatives of victims, many of whom have lost everything in the pursuit of justice or have even been murdered themselves.

In June 2011, in Ciudad Juárez on the border with the United States, after a caravan had driven 3,400 kilometres through the most violent states in the country, the MPJD first proposed a victims’ law.

The victims’ bill had a rough passage, and once the law had been approved in Congress, it was vetoed by Calderón. But his successor, President Enrique Peña Nieto, promulgated it in a solemn ceremony at which he said it was urgent to have a legal framework in place to protect victims.

“It is a victory for the Movement, and will benefit many people, but enforcing it is still a distant prospect,” another mother, Margarita López, whose 16-year-old daughter disappeared, and was presumably killed, in the southern state of Oaxaca, told IPS.

On Jan. 19, López was attacked in Mexico City when she was going to meet a team of Argentine forensic scientists to take DNA samples from the skeleton that the authorities say is her daughter.

“I am tired of fighting everyone, because the authorities are part of the problem. Sometimes I think about leaving the country, but if I go, who will look for my daughter?” she said.

The Victims’ Law covers legal and psychological protection, compensation, health services, housing and education, as well as a key element: “declarations of absence”.

These allow, for example, grandparents to have legal custody of their grandchildren, while the state is compelled to continue to look for their disappeared parents, because the declaration is not a death certificate.

The law involves re-engineering the enforcement of justice by means of a National Victims’ Assistance System. It has been harshly criticised by organisations close to former president Calderón, and also by the autonomous National Commission for Human Rights, which would lose some of its powers.

The law’s promotors themselves acknowledge that it contains errors, due to the speed with which it was enacted. The senate will have the opportunity of making corrections this month when it incorporates regulations that will translate it into policies.

“The law needs to be perfected; it was approved very quickly because the priority was getting the state to recognise the tragedy, but we are already amending it,” the recently appointed coordinator of human rights advisers to the attorney-general’s office, Eliana García, a supporter of the law, told IPS.

“It establishes a system of restorative justice in four dimensions: the right of victims to the truth, the right to justice, comprehensive compensation and the guarantee that this will not be repeated. It is an unprecedented law,” said García, a renowned leftwing social and political activist.

Detractors of the law point to the burden on the budget, as the law obliges the state to pay the costs of physical, mental, moral and material harm, as well as healthcare costs for victims of crime and human rights violations, no matter the perpetrator or when the crime occurred.

This means coverage would be extended to victims of the so-called “dirty war” in the 1970s.

Article 71 states that if the perpetrator of the crime cannot pay compensation, because he or she is a fugitive, dead or disappeared, the state will take responsibility for reparations up to the equivalent of 78,600 dollars.

“It was a mistake to make such a broad promise of subsidiary compensation; in the corrections we are working on, we have restricted reparations to serious crimes against life, freedom and physical integrity,” García said.

There will also be modifications to the National Victims’ Assistance System, which under the law includes nearly 4,000 officials in national and states’ ministries, as well as to the chapter on competencies, which only involves the national government.

What is still not clear is how regional and municipal authorities will be made to comply with the law, especially as they are most frequently accused of crimes by victims and their relatives.

The new bodies that will look after victims who are currently helped by the Procuradoría Social (socio-legal office), created in September 2011 and now to be replaced under the new system, have yet to be identified.

The MPJD is already preparing workshops and reading circles to study and promote the law in the country’s 31 states, in accordance with one of the agreements at a meeting held in the Mexican capital Jan. 25-27, at which organisations in the United States and Canada were also represented.

“We know that after this law’s publication, there is still a great deal to be done. We have come away with a long agenda,” activist Ted Lewis, head of the human rights programme for Global Exchange, one of the organisations that financed the caravan that travelled the United States and arrived in Washington in September 2012, told IPS.