MEXICO: Buckets of Tears, Moments of Joy on “Caravan of Solace”

CHIHUAHUA, Mexico, Jun 9 2011 (IPS) - One after another, people add their testimonies about the wave of terror Mexico is experiencing. At each stop of the Caravan for Peace and Justice with Dignity, there is an outpouring of grief from Mexicans who are inconsolable after the senseless violent deaths of their loved ones. 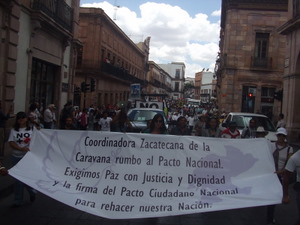 The Caravan for Peace on its way through Zacatecas. Credit: Daniela Pastrana /IPS

“I ask God, all of you and Mr. (Javier) Sicilia, for pity’s sake to help me find my son, because I feel like I’m going to die,” says a tearful Irma Leticia Hidalgo whose son, Andrés González, disappeared Mar. 27 after being detained at a military checkpoint on the way to the northeastern city of Nuevo Laredo in the state of Tamaulipas, on the border with the United States.

“We don’t want any more clandestine mass graves, we want our disappeared relatives to appear alive,” demands Rosalinda Zapata, of the United Front for Our Disappeared in the adjacent state of Coahuila.

The stories seem like they were taken from horror fiction, but they are all too real.

“We want justice, come hell or high water, because impunity is the worst possible outcome,” says Angela Díaz, whose daughter Betsabé was murdered at her home in December 2009, while she was unloading her purchases from the supermarket.

Poet Javier Sicilia, whose son Juan Francisco was murdered Mar. 28 in the central state of Morelos, is heading a 3,000-kilometre march to Ciudad Juárez, the border town in the northern state of Chihuahua that has become Mexico’s “epicentre of grief”, with a murder rate of 236 per 100,000 population.

The “caravan of solace”, as Sicilia calls it, set out Jun. 4 from Cuernavaca, the capital of Morelos, where his son and five other young people were tortured and killed.

Sicilia’s movement is proposing a social pact against the violence that has devastated the country since right-wing President Felipe Calderón launched his policy of “war” against organised crime, in which nearly 40,000 people have lost their lives since 2007.

The march, which has taken a zigzag northwards route, has become particularly moving since Monday Jun. 6, when it reached the cities most wracked by the “war”, and tabled an issue that has been relatively invisible: the question of the disappeared. In Coahuila alone, civil society organisations have documented 180 cases.

In Durango, the capital of the northwestern state of the same name, where more than 200 corpses have been found in mass graves since April, Sicilia and his companions were welcomed by hundreds of people, in spite of arriving four hours late.

Francisco Ortiz scrawled on a placard “Sicilia, my father would have marched with you but he died on Saturday,” and in tears he fell on Sicilia’s neck as he walked through the streets of the city.

Earlier, the poet was intercepted by a six-year-old boy, whose father, Fernando Rodríguez, a 31-year-old miner, was shot to death Mar. 20 and his body found wrapped in a blanket.

“Since his daddy was murdered, Paquito has become fearful, moody and temperamental. He says he is going to kill those who killed his father,” Cirila Flores de los Santos told IPS. “I have not reported the killing, the Attorney General’s office told me not to do so, and I held back because of the boy. But I decided to come forward now, so that we might have some protection, and I want to know, at least, what happened, and why?”

Streams of tears flow from participants on the caravan, joined by IPS. Sicilia, the poet who has become the voice of the bereaved in the Mexican “war”, embraces, consoles and weeps with them. And tears are also shed by all those who listen, even the journalists and photographers. No one escapes the collective grieving process.

“Javier Sicilia is brave enough to shed tears in public over things other people don’t even want to look at,” says Julián Lebaron from Chihuahua, who has become the heart and soul of the caravan.

Lebaron holds up a mirror to Mexican society. In Durango he said: “In every town we see photographs of people who have been killed and disappeared, and we hear of “narco-graves” (mass graves) and we all ask, Where is the government? Where is justice? Where is God?

“But we also have to ask, Where do we stand in this situation? When will we take action, or are we going to wait until our relatives, or perhaps we ourselves, appear in photographs on these placards?”

In Monterrey, the capital of the state of Nuevo León, he said that Mexicans “have not the slightest notion or understanding of community, and we are incapable of seeing others as human beings.

“That’s why there aren’t 100 million people linking arms here to repudiate 40,000 deaths,” he said. “Where are the rest? At work? At school? Watching TV? Lazing about? Whoever is not here, it is because there is something that matters to them more than life, it’s as simple as that,” he said to applause and cheers.

In Chihuahua, the capital of the state of the same name, the caravan moves on amid paradoxes, as parents denounce the police for forcibly disappearing, torturing and killing their children, and wives or mothers of police officers complain of the disappearance of their sons and husbands.

For instance, Gloria Aguilera came forward to report the disappearance in September 2008 of her husband and two sons, who were traffic police in Monterrey. In her moving account, she complained of the incompetence and indolence of the authorities, and of the lack of solidarity in society, which criminalises the victims.

“It’s been a hard road, full of frustration. They have names and faces, and a mother who is looking for them,” she said in distress.

Businessman Otilio Cantú, whose son Jorge Otilio was killed by the military, condemned a statement by President Calderón, who promised the only “shots” tourists from the United States would receive in Mexico would be of tequila.

“What about Mexicans, Mr. President, how many ‘shots’ must we receive? What will you say to Jorge Otilio’s grieving mother, his father, brothers and sisters, and his wife of only 15 days? On Apr. 18 not only was an innocent young man murdered, but his family, who believe in Mexico and want to continue to believe in its institutions, was destroyed,” he said.

The war among Mexicans continues without quarter, even for the Caravan for Peace and Justice.

On Tuesday, 13 young people were murdered in a rehabilitation centre for drug addicts in Toreón, two blocks away from the caravan route. Wednesday was worse: 21 bodies appeared in different parts of the city of Morelia, capital of the west-central state of Michoacán.

Moreover, five mass graves were discovered in the port of Acapulco, a federal police commander was murdered in Durango, and two men were found hanged from a bridge in Nuevo León.

On the march, however, spirits are high, with hugs of solidarity and outbursts of joy which intensify along the way to the capital of Chihuahua, the state where one-third of the killings during the Calderón administration have occurred.

In the capital, Sicilia and the marchers were welcomed with music and an improvised rally at midnight on Wednesday, concluding with a unanimous cry of “We are not alone!”