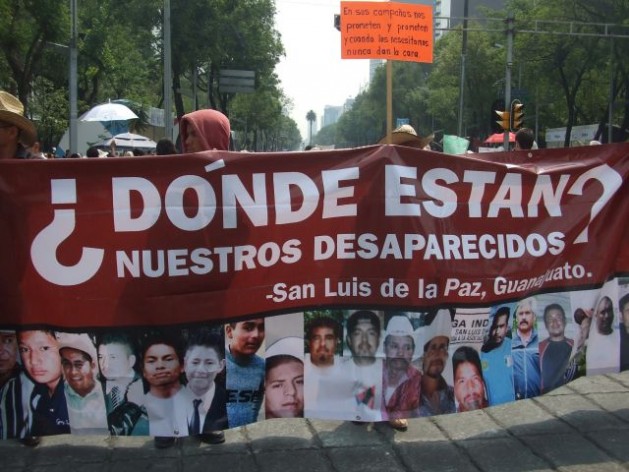 Mothers of the disappeared march in central Mexico City in May 2012. Credit: Daniela Pastrana/IPS

MEXICO CITY, Feb 8 2014 (IPS) - Tita Radilla is waiting, somewhat sceptically, for Mexican military personnel accused of carrying out forced disappearances to be brought before civilian courts. It is a demand that has spanned the past five decades.

Her father, Rosendo Radilla, was abducted by soldiers in August 1974 in the southern state of Guerrero, and Tita has searched tirelessly for him ever since, through the press, national courts and international bodies.

"Justice is too slow. There are no criminal prosecutions, no arrests and no trials." -- Tita Radilla

She took her complaint to the San José-based Inter-American Court on Human Rights, which in November 2009 ruled that the Mexican state was responsible for violating the rights to personal liberty, to humane treatment, and to life of Rosendo Radilla, a community leader in the municipality of Atoyac, 400 kilometres southeast of the capital city.

“It has been our struggle. It matters because of the huge efforts involved. We think being able to try the military in civilian courts is an achievement. It is a recognition of our efforts,” Tita Radilla told IPS.

On Tuesday, Feb. 4, the Mexican senate withdrew Mexico’s reservation to the Inter-American Convention on Forced Disappearance of Persons that allowed military authorities to investigate and punish the crime of enforced disappearance.

Conservative President Enrique Peña Nieto, of the Institutional Revolutionary Party (PRI), requested that the senate abolish the reservation in October, as part of Mexico’s commitments to comply with the Inter-American Court ruling.

While other countries like Argentina, Chile, El Salvador, Guatemala and Uruguay have made progress with holding trials of cases of forced disappearances, these crimes have remained completely unpunished in Mexico.

Forced disappearances have multiplied in recent years as paramilitary militias, drug cartels and human traffickers  have become involved in the crime. According to some estimates, there may be 30,000 victims or more.

“In our countries, the laws are not enforced. Justice is too slow. There are no criminal prosecutions, no arrests and no trials,” complained Radilla, who is the vice president of the Mexican Association of Relatives of the Disappeared (AFADEM).

“There won’t be any changes. We have heard many promises that have only served to make a lot of people busy, without any of our loved ones appearing or any trials happening,” said Martha Camacho, president of the Union of Mothers with Disappeared Children of Sinaloa (UMHDS), a state in western Mexico.

The disappearances must be “regarded as crimes against humanity that have no statute of limitation,” she said.

In August 1977, when Camacho and her husband, José Manuel Alapizco, were both 21, they were taken from their home in the northwestern city of Culiacán by agents of the Federal Security Directorate and municipal and traffic police.

The couple were active in the September 23 Communist League, and Camacho was pregnant. They were both tortured. Alapizco was executed and his body was never found.

After 47 days in captivity, her parents paid a ransom and Camacho and her newborn son were freed.

UMHDS was created in 1978 and documented 47 forced disappearances occurring in Sinaloa between 1975 and 1983.

Guadalupe Pérez, a member of Sons and Daughters for Identity and Justice Against Oblivion and Silence (HIJOS Mexico), is also a sceptic.

“It is surprising that it has taken nearly 12 years to put this situation to rights, and that it took the result of the Radilla case to see that much of what Mexico promotes on the international stage is not entirely enforced domestically,” said Pérez.

His father, Tomás Pérez, disappeared May 1, 1990, allegedly at the hands of paramilitaries, in the municipality of Pantepec in the southern state of Puebla.

The victim, 39 years old at the time, was active in the Central Campesina Independiente (Independent Peasant Union) fighting land seizures from the local rural population.

The National Human Rights Commission examined 532 cases from the 1960s and 1970s, during the “dirty war” between state armed forces and leftwing guerrillas, activists and social leaders.

Non-governmental organisations say disappearances during this period number over a thousand.

The ruling PRI party is in the awkward situation of having to investigate PRI governments that were in power when the disappearances began in the late 1960s, and prosecute those responsible.

“The main thing is for the state to carry out a thorough and effective investigation to find Rosendo,” said Radilla.

In spite of the Inter-American Court ruling, since May 2013 there has been no official attempt to find his remains.

In Guerrero, AFADEM opened criminal lawsuits in 126 cases. Since April 2012 this state has had a special commission to investigate violations of human rights during the dirty war, which has documented dozens of crimes.

One barrier to its work is that the national Attorney General’s Office has denied it access to testimonies and files collected by various state bodies.

There has been “a great pretence over 44 years, because forced disappearances continue to happen. Those who are in power bear the political responsibility, because they continue to avoid investigating or saying where” the disappeared are, Pérez complained.