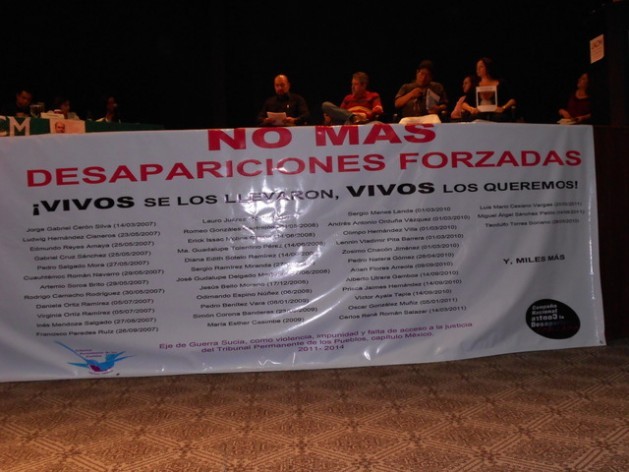 “No More Forced Disappearances; They Took Them Alive, We Want Them Back Alive!” say victims’ families who presented their cases to the Permanent People's Tribunal in Mexico. Credit: Emilio Godoy/IPS

MEXICO CITY, May 31 2013 (IPS) - The last time Enrique Rangel heard his brother Héctor’s voice was on the night of Nov. 10, 2009, when he called and said “they’re coming, they already stopped me and asked for money, and I already paid, but they’re coming.”

“We never heard from him again,” Enrique Rangel said, in one of the 13 testimonies heard by a jury of nine in Mexico City during a May 28-29 pre-hearing on “Forced disappearances and extrajudicial executions in Mexico: a permanent state policy.”

The pre-hearing was part of the work of the Mexico chapter, launched in 2011, of the Permanent People’s Tribunal (PPT), an international public opinion tribunal that has examined human rights violations and crimes against humanity since 1979 and hands down non-binding judgments.

The jury of each thematic pre-hearing will deliver its conclusions to a grand general hearing to be held in 2014, and a verdict will then be issued on the conduct of the Mexican state.

Héctor Rangel disappeared in the city of Monclova, in the northern state of Coahuila. “When we went there the police told us that some officers had arrested him, that he had paid a fine and that they had taken him off to be searched,” Enrique Rangel told IPS.

“But paying a fine at midnight? It seems very odd. Then they told us we’d better go away,” said Rangel, who lives in the central Mexican city of Querétaro.

Since 2007, as the military campaign against drug trafficking intensified in Mexico, the number of forced disappearances and extrajudicial executions has steadily climbed.

In this Latin American country, forced disappearances have traditionally been blamed on the public security forces and paramilitary groups.

But human rights activists say organised criminal groups are increasingly involved in the practice, sometimes acting in collusion with the police or military.

In December 2006, only days after he took office, conservative former president Felipe Calderón deployed the armed forces to combat the illegal drug trade, a strategy that has had fatal results.

During his six-year term, more than 100,000 homicides were committed, over 26,000 people disappeared and another 250,000 were displaced, according to official reports and NGOs.

The violence has continued since the arrival in office of conservative President Enrique Peña Nieto. Between December and the end of April there were 8,000 violent deaths, according to journalists’ tallies.

Common threads in all of the accounts heard by the PPT were the problem of impunity and the desire for justice.

Domingo Pérez, a Chol Indian who testified before the PPT, is tireless in his search for his sister Minerva Pérez, who was a 19-year-old student when she disappeared on Jun. 20, 1996, in the municipality of Tila in the southern state of Chiapas.

“Witnesses say she disappeared at a checkpoint. We reported her disappearance and an investigation was ordered. But the authorities have not taken up the matter. This is a violation of our rights, we want to live in peace but the government thwarts our wishes,” Pérez told IPS.

The Fray Bartolomé de las Casas Human Rights Centre (FRAYBA) learned from witness statements that Minerva Pérez was held for three days by the Paz y Justicia paramilitary group. During that time she was beaten and raped, and afterward all trace of her was lost in the Chiapas jungle.

At the time the armed forces were fighting the leftwing Zapatista National Liberation Army (EZLN) that took up arms on Jan. 1, 1994 in Chiapas, one of Mexico’s poorest states.

FRAYBA documented 37 forced disappearances and 85 killings committed between 1995 and 2000, most of them by three paramilitary groups which according to reports were supported by the army and the state government.

“The cases are well grounded. The situation is muddied by the strategy of blaming the disappearances and executions on organised crime. Now it will be harder to prove the relationship between paramilitary groups and the state,” Clemencia Correa, an academic and one of the members of the PPT jury, told IPS.

The PPT deals with matters like collective violence, impunity, lack of access to justice, migration, femicide and other gender-based violence, threats to native maize and food sovereignty, as well as environmental destruction.

Victims’ relatives continue to fight for effective investigation of their cases.

“We ask for clarification of where (our loved ones) are, and if they committed a crime, that they be tried. We want an effective inquiry to catch those responsible and put them on trial,” Nadin Reyes, the daughter of Edmundo Reyes, who disappeared together with Gabriel Cruz on May 25, 2007, told IPS. They both belonged to the leftwing insurgent Popular Revolutionary Army (EPR).

Based on an investigation by the National Human Rights Commission, their relatives believe that they were both captured in a combined state and federal police and military operation at a hotel in the southern city of Oaxaca.

Like the titles of Swedish author Mari Jungstedt’s trilogy of novels, they are: Unspoken. Unseen. Unknown.

“It’s a politically motivated case, because of his involvement in the EPR. We made the same journey all the families have had to make, to several agencies to ask for solidarity and demand a response from the authorities,” said Reyes.

On Monday May 27 the Mexican government announced the creation of a Disappeared Persons Search Unit. But victims’ families complained that only 12 agents were assigned to it.

“We have the log books of the police officers who arrested my brother, and their names. We gave them to the authorities and they still haven’t been able to arrest them,” complained Rangel, whose brother sold clothing.