No Celebration for Mothers of the Missing in Mexico 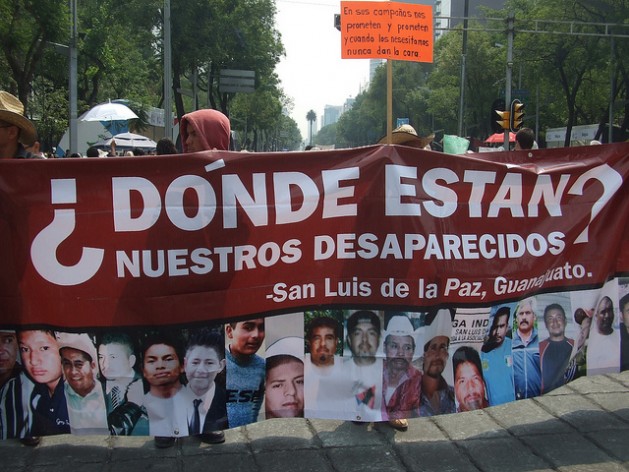 "Where are they?" ask mothers looking for their missing sons and daughters, after driving 2,000 km to Mexico City. Credit: Daniela Pastrana/IPS

MEXICO CITY, May 15 2012 (IPS) - Emma Veleta and Toribio Muñoz were married 40 years ago and had seven children, four boys and three girls. They lived in the town of Anáhuac, 100 km from the capital of the northern Mexican state of Chihuahua. But on Jun. 19, 2011, as they were celebrating Father’s Day, tragedy struck.

Armed men wearing federal police uniforms stormed into their house and took away Muñoz, a retired railway worker, and all of his sons, a nephew, a son-in-law, and a grandson. Veleta has never seen them again.

“I thought that if I came to Mexico City, I could find some clues about what happened to my family,” she told IPS. “I didn’t find anything, but I did discover that many women are going through the same thing,” she added, explaining that she had had to flee her town after receiving a series of threatening phone calls.

Guadalupe Aguilar, a retired nurse, is also searching for a missing loved one: her son José Luis. The last she knew of him was on Jan. 11, 2011, when the 34-year-old went to meet his brother in the city of Guadalajara, in the western state of Jalisco.

“It was a 12-minute drive, but he never got there. His car turned up later in Colima (a neighbouring state),” said Aguilar, who on Sept. 7 managed to speak to President Felipe Calderón when he visited Guadalajara, and asked him for help finding her son.

Calderón “told me to go to the Procuraduría de Víctimas (Mexico’s new crime victims protection office), which would open a file on the case,” she told IPS. “But all that has been done, and I have nothing concrete to show for it. And I see all these women here, and I ask myself: how many of us do there have to be, for us to get some attention? Why don’t they do anything?”

Veleta, Aguilar and many other women in this country did not celebrate on May 10, which is Mother’s Day in Mexico. They traded flowers and mariachis for a March for National Dignity – a caravan that covered 2,000 km over the last week to demand justice in the disappearance of their loved ones.

“We came (to the capital) to remind Mexico that we don’t have much to celebrate, because part of our heart is dead,” activist Norma Ledezma, head of Justicia para Nuestras Hijas (Justice for Our Daughters), a human rights group from Chihuahua, told IPS.

The first group of women set out on Monday May 7 from violence-stricken cities in Chihuahua like Cuauhtémoc, Bocoyna, Gran Morelos and Ciudad Juárez. And as the caravan headed south, it was joined by mothers from the states of Durango, Coahuila, Nuevo León, Tamaulipas, San Luis Potosí, Guanajuato, Jalisco and México.

After a 2,000-km drive, they reached the capital on Wednesday May 9, where they met with the mothers who have come together in the Committee of Relatives of Dead and Missing Migrants of El Salvador (COFAMIDE), which has documented 319 cases of Salvadoran migrants who have gone missing in Mexico.

On Friday May 11, they met with Attorney General Marisela Morales to express their main demands: federal investigations and an immediate search for all of the missing persons, as well as the creation of a national database on cases of disappearance, a special prosecutor’s office on disappearances, and a federal programme to assist the families of victims.

They also called for the implementation of a protocol on the procedures to be followed in investigations of disappearances, and of United Nations recommendations in cases of forced disappearance.

The interior minister, Alejandro Poiré, cancelled the meeting the mothers had scheduled with him.

“Where are they?” the mothers-turned-activists ask at every door they knock on.

In the caravan, they were accompanied by members of HIJOS, an organisation made up of the sons and daughters of victims of forced disappearance of Mexico’s “dirty war” against dissidents, in the 1960s and 1970s.

“Don’t lose faith,” they were told by Senator Rosario Ibarra, founder of the Committee for the Defence of those Imprisoned, Persecuted, Disappeared and Exiled for Political Reasons (known as the Eureka Committee).

“Don’t ever think that they are dead. Look for them as hard as you can, fight as hard as you can. I have been fighting since 1975, I’m already old now,” said Ibarra, who visited the mothers at the camp they set up on Thursday May 10 at the Ángel de la Independencia monument, a focal point for protest in Mexico City.

Most of the women are indirect victims of the war on drugs and crime launched by President Calderón at the start of his term in December 2006. Since then, the groups that organised the caravan have documented more than 800 disappearances.

There are no official figures. The only indication of the magnitude of the phenomenon has come from the National Human Rights Commission – an independent government body – in April 2010, when it reported that it had received 5,397 reports of people who have gone missing since the start of the Calderón administration, and that nearly 9,000 dead bodies had never been identified.

Nitzia and Mita, 16-year-old twins, are looking for their mother, Nitzia Paola Alvarado, who was detained by members of the military on Dec. 29, 2009 along with their uncle José Ángel and their cousin Rocío in the town of Buenaventura, Chihuahua. None of them were taken to a police or military precinct, and they were never seen again.

Due to harassment and threats, 37 members of the family were forced to flee the state.

The caravan, which returned north over the weekend, received a letter from victims’ relatives who formed the group LUPA (the Spanish acronym for Struggle for Love, Truth and Justice), in Nuevo León, one of the states hit hardest by the spiralling violence, where 49 decapitated and dismembered bodies were found along a highway on Sunday.

“There are no words to describe the pain that mothers feel when a son or daughter disappears…but if we had to try to describe it, if we had to find words, we would tell you it is a terrible ordeal, a via crucis that never ends, unending agony,” says the letter.

“Our pain and our struggle for our missing sons and daughters are heightened when we see that part of society is indifferent, when we see a government that also contains corrupt authorities who are in league with criminal elements,” LUPA adds.

These women who have lost sons and daughters and who don’t know what to tell their grandchildren when they ask what happened to their father or mother have decided to channel their pain into the struggle for justice.

Julia Ramírez has 12 children. Alejandro, the oldest, decided to migrate to the United States when he turned 18, to help support his family. He left his home in San Luis de la Paz, in the central state of Guanajuato, on Mar. 21, 2011, with 16 other campesinos (peasant farmers). None of them were ever seen again.

“My children told me there would be a mother’s day festival. It was really hard for me to leave them, but I have to continue the search; they’re at home, but their brother isn’t,” she said.