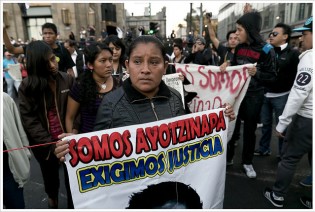 By Emilio Godoy
The Mexican government will face close scrutiny from the United Nations Committee on Enforced Disappearances – a phenomenon that made international headlines after 43 students from a rural teachers college were killed in September in Iguala, in a case that has not yet been fully clarified.
ADVERTISEMENT ADVERTISEMENT