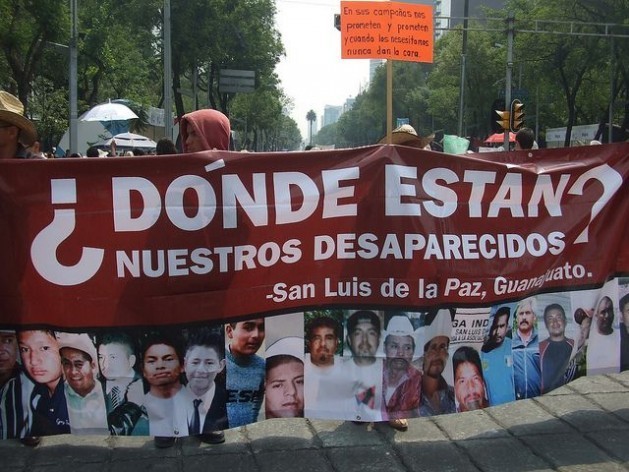 “Where are they? Our disappeared.” A protest march by the mothers of victims of forced disappearance in Mexico City. Credit: Daniela Pastrana/IPS

GENEVA, Feb 16 2015 (IPS) - “The U.N. Committee on Enforced Disappearances is not a court, and I say this to avoid any misunderstanding,” German expert Rainer Huhle said while presenting the committee’s recommendations to the government of Mexico, where the problem has reached epidemic proportions.

Huhle, one of the 10 members of the committee, explained how the language and rhythms of international diplomacy work even in a pressing case like the tens of thousands of enforced disappearances reported in Mexico.

“The information received by the committee shows a context of generalised disappearances in a great part of the country, many of which could qualify as enforced disappearances,” says the report containing the committee’s concluding observations, presented Friday, Feb. 13.

It notes that disappearances were already occurring in December 2010, when the International Convention for the Protection of All Persons from Enforced Disappearance went into effect.

The text uses the conditional tense to urge the Mexican government to take action, in a tone of mild rebuke, repeating, for example, “the state party should…” in several of its recommendations – but without ignoring any of the most serious aspects of the crime of enforced disappearance.

“I think the analysis is very thorough,” María Guadalupe Fernández, whose son was disappeared, and who belongs to a group of victims’ relatives in the northeastern Mexican state of Coahuila – Fuerzas Unidas por Nuestros Desaparecidos en Coahuila y en México – told IPS.

The lawyer Michael Chamberlin, of the Fray Juan de Larios Diocesan Human Rights Centre in Coahuila, told IPS it was “positive that the committee recognised that disappearances are widespread, because it puts into perspective the magnitude of the phenomenon in Mexico.”

Chamberlin was also pleased that the committee “pointed to the lack of a precise registry of disappearances linked to efficient search mechanisms for recent and past disappearances, sensitive to gender, age and nationality.”

The lack of precise information on the number of disappeared was one of the points that was most emphasised by the committee, which demanded that the Mexican state resolve the issue over the next year.

According to a Mexican government figure cited by rights watchdog Amnesty International, some 22,600 people have gone missing in the last eight years.

“These figures have changed in magnitude several times,” Huhle told IPS. “We can’t trust these statistics because we don’t know how they get them.”

The committee considered the case of Mexico at a special hearing held Feb. 2-3 in Geneva.

“Within a year, we hope the authorities will tell us what they have managed to do. They should understand that this is a priority. Of course, we don’t expect everything to be perfect in one year, but by then they should have taken a few steps forward,” he added.

The committee also set a one-year deadline for Mexico to address the problem of missing migrants, most of whom come from Central America, and a smaller proportion from several South American countries, “who cross Mexico trying to reach the ‘paradise’ north of the Rio Grande,” Huhle said.

The committee was more emphatic in declaring its concern for missing migrants, “including children…among whom there are apparently cases of enforced disappearance,” say the concluding observations.

The third demand by the committee, also with a one-year deadline, is that Mexico “must redouble its efforts with a view to searching for, locating and freeing” people who have been disappeared.

Chamberlín also said it was positive for activists that the committee demanded that the legislation in Mexico’s different states be harmonised, and that it underlined the impunity surrounding forced disappearances and pointed out how the authorities avoid carrying out proper investigations by disguising disappearances as other crimes.

Fernández, the mother of José Antonio Robledo Fernández, an engineer who went missing in January 2009 at the age of 32, stressed that the committee “put a spotlight on a grave problem that has overwhelmed Mexico.”

It did this, she said, by demanding the implementation of mechanisms “that will not just be medium- to long-term plans but will be immediate, so the state will support the families who go around the country looking for our loved ones.”

But Fernández did not agree with the committee’s decision to give the Mexican state until 2018 to live up to its recommendations, with the exception of the three one-year deadlines regarding the registry of disappearances, migrants and the search for missing people.

“I really doubt that the state will live up to this and meet all of the recommendations of the committee in support of the indirect victims of this national emergency and that it will put an end to all of the human rights abuses and implement standards that should be immediate,” she said.

Among the gaps left by the committee, Chamberlin said it had failed to mention the lack of independence of the prosecutor’s office “as one of the main causes of the impunity in terms of disappearances.” It only mentioned this in the case of the military justice system, the lawyer said.

Nor did it refer to the lack of penalties for government officials or employees guilty of negligence or corruption, he added.

Chamberlin noted that the committee did not take into account the crisis of credibility suffered by the country’s justice system. He said it should have urged the state to fully cooperate with the group of experts on forced disappearance appointed by the Inter-American Committee on Human Rights (IACHR).

The experts will make several visits to different parts of the country this year, as part of the precautionary measures issued by the IACHR in the case of the 43 missing students from the Escuela Normal Rural de Ayotzinapa, a rural teachers college in the southern state of Guerrero, who were disappeared on Sep. 26.

The IACHR group of experts “will not only try to investigate and to overcome shortcomings in the investigation, but will also try to give certainties to the victims’ families,” said Chamberlin.

The human rights activist called for “a more proactive role by the committee and not only as an observer of the serious situation in Mexico….When it comes down to it, how many countries can you describe as having a ‘context of generalised disappearances’?”