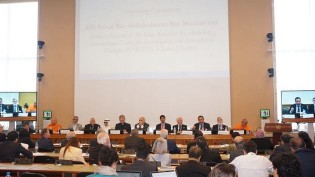 By Gustavo Capdevila
As it turns 50, the United Nations Conference on Trade and Development (UNCTAD) finds itself engaged in an ongoing struggle to reduce economic and social inequalities in the world.

By Gustavo Capdevila
The complicated challenge of invigorating the debilitated World Trade Organisation (WTO) and the multilateral trade system that it governs will fall, for the next four years and for the first time ever, to a Latin American.

By Gustavo Capdevila
The impact of human rights education, a rising star, is highlighted in a short documentary sponsored by United Nations experts and civil society.

By Gustavo Capdevila
An expert body of the United Nations has warned the Spanish government that the severe budget cutbacks it is applying must not undermine its commitment to upholding the economic, social and cultural rights of the country's people.

Future of UNCTAD in Balance at Doha

By Gustavo Capdevila
Profound discord between industrialised nations and developing countries is threatening to ruin the UNCTAD meeting being held this week in Doha, and may even endanger the survival of this United Nations body that defends the interests of the developing nations of the South.

Speaking Out in Defence of UNCTAD

By Gustavo Capdevila
The reason the United Nations Conference on Trade and Development (UNCTAD) is under attack is that rich countries do not want an organisation that carries out independent analysis, Rubens Ricupero, UNCTAD secretary general from 1995 to 2004, told IPS.

By Gustavo Capdevila
Social unrest and demands for change are not a negative thing during times of crisis like today, says Rubens Ricupero, a prominent Brazilian diplomat and intellectual.
Next Page »
ADVERTISEMENT ADVERTISEMENT