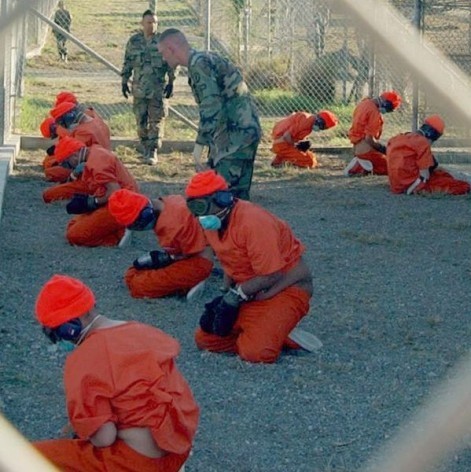 The human rights exam in Geneva complained that U.S. President Barack Obama has failed to keep his promise to close down the Guantánamo military base. Credit: Shane T. McCoy/U.S. Navy

GENEVA, May 12 2015 (IPS) - Without the emperor’s clothes, like in the Hans Christian Andersen story, the United States was forced to submit its human rights record to the scrutiny of the other 192 members of the United Nations on Monday.

Washington attended the country’s second universal periodic review (UPR) in the Geneva-based U.N. Human Rights Council, which reviews each U.N. member country’s compliance with international human rights standards.
“So today was a demonstration of the no confidence vote that world opinion has made of the United States as a country that considers itself a human rights champion,” said Jamil Dakwar, director of the Human Rights Program (HRP) of the American Civil Liberties Union, a non-profit organisation that has worked to defend individual rights and liberties since 1920.

“I think that there was a clear message from today’s review that the United States needs to do much more to protect human rights and to bring its laws and policies in line with human rights standards,” he told IPS.

Although the UPR has come in for criticism because its conclusions are negotiated among governments, it is recognised for starkly revealing the abuses that states commit against their own citizens and those of other countries – and the Monday May 11 session was no exception.

One of the demands set forth by the 117 states taking part in the debate was for Washington to take measures to prevent acts of torture in areas outside the national territory under its effective control and prosecute perpetrators, and to ensure that victims of torture were afforded redress and assistance.

With respect to torture, among the positive achievements mentioned was the release of a report on abuses committed as part of the Central Intelligence Agency’s (CIA) interrogation practices.

The head of the 20-member U.S. delegation that flew over from Washington, acting legal adviser in the State Department Mary McLeod, gave an indication that the negotiations for the visit by Juan Méndez, U.N. special rapporteur on torture and other cruel, inhuman or degrading treatment or punishment, to the U.S. Naval Base at Guantanamo Bay were not closed.

In March, Méndez, an Argentine lawyer who lives in the United States, complained that Washington did not intend to give him access during his visit to the more than 100 inmates in Guantanamo.

The country’s closest ally, the United Kingdom, congratulated the United States on its commitment to close Guantanamo, announced by President Barack Obama before his first term began in January 2009. But the British delegate said they would like to see it actually happen.

“The problem with Guantanamo is that it created a system of indefinite detention that we would like to see shut down with the facility,” Dakwar said. “It also created a flawed system of military commissions that provide a second system of justice. This system should also be shut down.”

Ejim Dike, executive director of the U.S. Human Rights Network, said the concerns brought to the attention of the U.S. delegation revolved around issues of poverty, criminalisation and violence.

“In the United States we have more money today than we ever had. We have the highest child poverty rate of any industrialised country. However, for the UPR no one from the government mentioned poverty,” Dike commented to IPS.

The Cuban delegates addressed the issue, urging the United States to guarantee the right of all residents to decent housing, food, healthcare and education, in order to reduce the poverty that affects 48 million of the country’s 319 million people.

A number of countries asked the United States to ratify the International Covenant on Economic, Social and Cultural Rights, in effect since 1976 and considered one of the pillars of the U.N. human rights system.

Furthermore, it has not recognised the International Convention on the Protection of the Rights of All Migrant Workers and Members of Their Families, or the International Labour Organisation’s (ILO) conventions on forced labour, minimum age for admission to employment, domestic workers, and discrimination in respect of employment and occupation.

McLeod also said that her country is not currently considering the ratification of the Rome Statute, which created the International Criminal Court.

Dakwar said the debate in the UPR highlighted “the issue of the lack of a fair criminal justice system that is being demonstrated through the stops and frisks, racial profiling, racial studies in the death penalty. You see it in the police violence and killing of unarmed African-Americans with no accountability.

“Its inhuman and unfair system of immigration needs to again be brought in line with human rights…That means…no detention of migrants, and ending migrants’ family detention,” he added.

Another of the main recommendations to the United States is that it desist from targeted killings through drones.

“The United States continues to violate human rights in the name of national security and it needs to roll back these policies and bring them in line with the U.S. constitution and international law,” Dakwar argued.

“Also in the domestic system we have surveillance of Muslim communities. There is a guidance by the Department of Justice that they allow the use of informants within communities, particularly Muslim and Middle Eastern communities,” he added.