GENEVA, May 15 2013 (IPS) - Brazilian diplomat Roberto Carvalho de Azevêdo was named the new director general of the WTO with broad support from the developing world, beating out his Mexican rival Herminio Blanco, who was backed by the industrialised nations.

“The results of the selection process reveal that most members of the WTO (World Trade Organisation), the majority of whom are developing countries, are dissatisfied with the current status quo – which Blanco represented,” Deborah James, coordinator of the Our World Is Not For Sale (OWINFS) network of dozens of organisations, activists and social movements worldwide, told IPS.

She said the countries were frustrated “in terms of continuing the current failed model of corporate globalisation, based on liberalisation and deregulation – that the WTO consolidates globally – without regard for the negative impacts of these policies on workers, farmers, and the environment.” 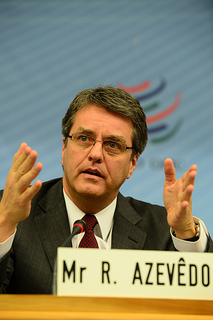 Azevêdo’s formal appointment on Tuesday May 14 was seen as a breath of fresh air in the rarefied climate which has numbed the WTO – headed over the last eight years by French economist Pascal Lamy – for at least a decade.

It also urged the WTO to guarantee that its leadership reflected the diversity of its 159-nation membership, representing all of the world’s regions.

“Today we succeeded in ensuring that Latin America is represented in the leadership of the WTO for the first time,” the delegation said, adding that it would soon be Africa’s turn to contribute its rich leadership to the global trade body.

The WTO and its predecessor, the General Agreement on Tariffs and Trade (GATT), have been governed by representatives of industrialised nations with the exception of the period 2002-2005, when the organisation was led by Supachai Panitchpakdi of Thailand.

James said “Now it will be up to the new Director General Azevêdo to respond to the obvious need that global civil society (through the OWINFS network) has been highlighting: for the transformation of the existing system, to ensure that it can provide countries sufficient policy space to pursue a positive agenda for development and job creation, and so that trade rules can facilitate, rather than hinder, global efforts to ensure true food security, sustainable economic development, global access to health and medicines, and global financial stability.”

“The request for extension would allow these countries to avoid monopoly protection for medicines, diagnostics and medical devices,” he added.

This request and other demands by the LDCs, along with the questions of agriculture and trade facilitation, are among the issues likely to be on the agenda of the WTO ministerial conference slated for Dec. 3-6 in Bali, Indonesia.

Azevêdo has avoided making clear statements on the WTO’s future because he is merely director general-designate until September.

However, in an acknowledgement of the difficulties facing the negotiations in Bali, the Brazilian diplomat warned that if the meeting is “not successful, it will make the road a lot more difficult ahead.

“We need to move the WTO from where we are today to an organisation that is again meaningful, that again delivers negotiated outcomes that the world hopes and expects from us.”

But the differences among the negotiators are not the only threat to the conference in Bali. The Asian Peasant Coalition (APC) announced that “We will register our strong resistance against the WTO in its 9th ministerial meeting.”

The APC will hold a series of coordinated activities against the WTO meeting, in Bangladesh, India, Indonesia, Nepal, Pakistan, the Philippines and Sri Lanka, said the organisation’s deputy secretary general, Rahmat Ajiguna.

The WTO accords in agriculture “resulted in massive displacement, destruction of local industry, and increasing land and resources grabs,” the APC added.