GENEVA, Mar 7 2012 (IPS) - Social unrest and demands for change are not a negative thing during times of crisis like today, says Rubens Ricupero, a prominent Brazilian diplomat and intellectual. 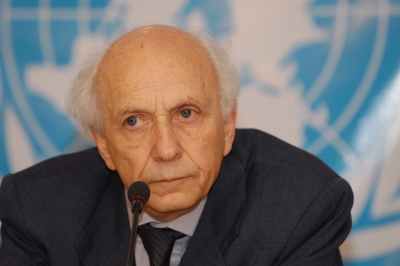 The former secretary general (1995-2004) of the United Nations Conference on Trade and Development (UNCTAD) predicts that recovery from the current global economic crisis will take at least four or five years.

Ricupero, who has a long and distinguished diplomatic career in Brazil, where he has held several ministerial posts as well, also says numerous multilateral negotiations, like the World Trade Organisation (WTO) Doha Round of talks, will remain stalled.

The deadlock, he says, is related to an ongoing phenomenon: a shift in global power from the North Atlantic to the Asia-Pacific region.

In these circumstances, it is difficult to reach a consensus on deeper issues in multilateral talks, Ricupero told IPS in this exclusive interview.

Q: What is your assessment of the global situation? A: In the industrialised countries, I don’t think there can be much hope of short-term recovery. The Europeans do not even have a strategy to cope with the problems of the highly indebted countries. It will take quite a lot of suffering before any solution is reached.

Growth has practically disappeared in Germany, the country that matters. In others, like Italy and the Netherlands, there is recession. It looks like this will be another lost year for Europe.

Q: And in the United States? A: A lot will depend on the presidential elections in November. It’s not possible to predict the outcome, but I would venture to say President Barack Obama will be reelected.

The U.S. economy is starting to show signs of recovery, albeit slow and insufficient in terms of job creation, but the pace should pick up somewhat over the next few years.

Q: So the outlook is discouraging. A: This year and the next we won’t see major differences with respect to the dichotomy we have experienced in recent times. The economies of the developing South continue to grow, particularly China, India and other Asian countries, and as a result countries of Latin America and the Middle East are growing as well. I don’t see on the horizon either a major threat of a catastrophe like the collapse of the Lehman Brothers in 2008 or a promising recovery.

Q: Will it be a long wait? A: Like in the 1930s, recovery will take a while. Full recovery of the global economy as a whole won’t be seen for at least four or five years.

Q: Does that go for Latin America as well? A: No. That doesn’t mean other regions won’t be able to recover earlier. You have to keep in mind that in the 1930s, with a few exceptions, like Argentina, which suffered more because of its dependence on exports to Great Britain and its decision to try to pay off its debt, the rest of the countries of Latin America were in a good position, like Colombia, Brazil, Chile, Peru and Mexico.

Q: Is the outlook similar today? A: I see two differences in our favour. First, in 1930 we didn’t have the current phenomenon of the economic growth in China, India and other Asian countries. The world basically depended on the industrialised countries.

The second difference is that in the 1930s, the countries of Latin America were already crushed by heavy foreign debt, and the great majority of countries in the region were unable to meet their payments.

This time we are starting out the decade in an incomparably better situation, with strong reserves, a low level of debt, and a more favourable internal situation in terms of growth, employment and improved social indices.

I’m talking about the situation in countries like Brazil, Chile, Argentina and Peru, not so much about those that depend more directly on the U.S. market – the countries in the northern part of the region.

Q: International negotiations are running up against serious difficulties in questions like disarmament, trade and the environment. What is your impression of the multilateral system? A: Things are not going well because there is a deadlock on nearly all of the major issues.

Q: What would you say are the reasons for that? A: There are two overlapping phenomena. One is circumstantial: the economic crisis that sooner or later will have to come to an end. Another runs deeper: for years we have been seeing a shift in the world’s centre of economic and demographic gravity from the North Atlantic to the Asia-Pacific region.

This is a phenomenon that the great French historian Fernand Braudel (1902-1985) would have called a very long-term secular tendency, such as in the case of the shift in the centre of world trade from the Mediterranean to the Atlantic in the 16th century, at the time of the big discoveries.

Q: Is that shift in power irreversible? A: It won’t stop happening. On the contrary, the short-term crises are fuelling it, reinforcing it. As the United States gets weaker economically, this obviously greatly favours the accumulation of reserves and financial power in countries like China.

It is at those rare times in history, which occur once every two or three centuries, that there is a change in global distribution. And at those times a consensus on how to cope with the deeper underlying issues is less likely to be reached in the multilateral bodies.

Q: Give me more details about this phenomenon. A: Until recently, the United States was an arbiter making the decisions in the world. It was the hegemonic power that guaranteed the liberal economic order.

It played that role since the end of World War II, with the reorganisation of the economic and financial system – the creation of the International Monetary Fund (IMF), the World Bank and the predecessor of the WTO, the General Agreement on Tariffs and Trade (GATT) – and of the political system by means of the United Nations charter.

Throughout the long Cold War, the United States continued to be the country that guaranteed the production of results in the major conferences that gave rise to the so-called international regimes. That was so much the case that when the United States abstained, as in the case of law of the sea, things did not move forward.

Q: What is the new reality? A: Today the United States is starting to reassess its positions, to feel a stronger need to focus on its domestic problems, to change its military strategy. It is shifting the focus away from the Middle East and Islamic issues to Asia. And it is starting to realise that the big strategic adversary, in the long run, is China, not Al Qaeda or the Islamists.

So in this process no one is appearing to play the role of arbiter. That’s what is being seen in the incidents involving Syria in the U.N. Security Council, and also in the other major international negotiations.

Q: Are we looking at an imminent shift in power? A: No, I don’t see the possibility of a change in the short term. If Obama is reelected, he will pay more attention to big domestic problems, like he has been doing. And China and India are still facing huge challenges. They are not ready, nor do they want, to assume the weight of that responsibility.

It is a very difficult moment, which fits the great Italian Marxist thinker Antonio Gramsci’s (1891-1937) definition of crisis. Gramsci said crisis is the moment when the old world is dying away, and the new world is struggling to come forth, and in that interregnum a great variety of morbid symptoms appear.

That is what we are experiencing now. Also the fact that even the industrialised countries have started to discuss the crisis of capitalism. But they can’t come up with a solution because the same people who created the crisis are still dealing the cards.

Q: Do you think there will be some kind of reaction? A: Things are going to be very agitated over the next few years. Not in the sense of a global conflict, but in this kind of thing we are seeing: dissatisfaction, indignation, unrest, a desire for change. Which isn’t negative, because we must not ever lose sight of the fact that history is driven by times of difficulty.

I wouldn’t go so far as to say, like the Marxists, that violence drives history. But dissatisfaction does. It is at the root of the big global changes, like the French Revolution, the Protestant Reformation, the Rennaissance. During those times people were dissatisfied with how they were living.

Q: And today? A: That social unrest can be a highly creative force. It is upsetting for those who live during those periods, because it questions all values, all habits, but it is creative.

I don’t think it’s bad for people not to feel satisfied with a system that is based to such an extent on injustice and the lack of equality. People have to rebel against what the bankers have done, and are still doing.

That is why I have said: more power to the men and women who fight for an economy with greater equity, justice and balance. People must not resign themselves to this.

Q: Could the crisis affect the survival of the multilateral bodies? A: The U.N. in particular has demonstrated great flexibility. I’ll mention two episodes: In 1971, when communist China was admitted to and became a permanent member of the Security Council, it was said at the time, in the period following the Cultural Revolution, that it would cause great instability in the world. And that did not happen.

And the second: the end of communism brought about a total change in the map of the world. The Soviet Union fell apart into I don’t know how many pieces. The Yugoslav federation did too. And all of that happened with a relatively contained degree of violence, except in the case of the Yugoslavians, for other reasons.

At both times, what happened was that the organisations, particularly those of the U.N., managed to adapt to the changes. What is bad is when an organisation is so rigid that it cannot adapt, and it perishes.

The U.N. has that flexibility, which at times causes a great deal of perplexity and dissatisfaction.

Q: Do you believe the financial organisations, like the IMF, World Bank and WTO, will survive intact? A: No. I hope this movement demanding change will modify not only the internal economies of countries, in the sense of moving away from that market fundamentalism, but that it will also change the institutions that have represented that fundamentalist spirit.

And in order for that to happen, the central role has to be played by people around the world – not only in the (developing) South – who are aware of the problem, that it is not possible to continue with an organisation that foments the growth of inequality.