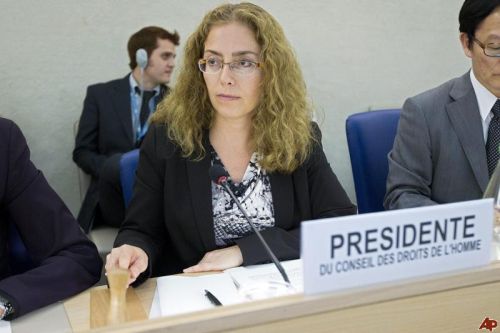 GENEVA, Dec 14 2012 (IPS) - The first woman to preside over the United Nations Human Rights Council, Uruguayan diplomat Laura Dupuy, has made it with flying colours through one of the periods of greatest tension and conflict since the council replaced the U.N. Commission on Human Rights in 2006.

It has fallen to Dupuy to preside over regular and special sessions this year with heated debates over the dramatic events in Arab countries like Tunisia, Egypt, Libya, Yemen, Bahrain, and especially Syria.

The Permanent Representative of Uruguay to the United Nations Office at Geneva has won recognition from her colleagues and from non-governmental organisations for getting occasionally stormy sessions back on track.

Dupuy told IPS that being a woman was not an obstacle to fulfilling her role, which concludes Dec. 31. “Luckily I did not encounter hurdles,” she said. “In fact, I think that countries that could have put difficulties in my way were very careful not to do so.”

Q: What reactions have you observed since the annual sessions commenced last March?

A: It’s possible that some people had doubts about what might happen with a president they did not know. But they soon saw that I stuck to the rules and was firm. After that they respected me.

Q: But did you run across any stumbling blocks because you are a woman?

A: I had some problems, but…I don’t think they were very serious. The most difficult moment was when we discussed the case of Bahrain, because there were protests about my intervention and complaints about the intimidation being suffered there by human rights defenders who attended the debate in Geneva for the Universal Periodic Review on the situation in that Arab country.

Q: Were there any other tough times?

A: Yes, but they weren’t personal. What I have unfortunately seen in the chamber is that some countries, basically the Islamic nations, still have a fairly retrograde discourse. In fact, I am worried that there may be a regression with respect to the Universal Declaration of Human Rights, approved in 1948.

I am also concerned that something similar may happen among the Islamic states in regard to the Vienna Declaration, adopted in 1993 by the World Conference on Human Rights, which reaffirmed that women’s rights are human rights.

Q: Have you noted this regressive tendency at any other time?

A: We see it when they continue to question or attempt to limit the scope of the new Working Group on Discrimination against Women in law and in practice. The fact that, although they did not vote against it, they expressed discontent with the new mandate, is an indication of the situation.

Q: Do you think this bias still persists?

A: It does. Unfortunately, it is being confirmed. For instance, in Egypt now, with the draft constitution. The Egyptian expert has just told me that the paragraph referring to non-discrimination for any reason, including gender, has been eliminated from the draft. This is serious. It is a central principle of human rights.

Q: Is this issue restricted to a single region?

A: No, it also arises in the declaration of human rights approved in November by the Association of Southeast Asian Nations (ASEAN). The text was negotiated merely between governments, without consulting civil society, and there was a major problem with women’s rights in the drafting of the text.

United Nations High Commissioner for Human Rights Navi Pillay was not satisfied. But after the ASEAN declaration was approved, another resolution was added, saying that the declaration would be implemented in accordance with the 1948 Universal Declaration.

We hope that this will be the case, and that as matters develop they will comply with this aspect. To sum up, from the point of view of women’s rights, I think there is still much that remains to be done.

Q: What have been the highlights of your presidency of the Council?

A: The period has been marked, unfortunately, by all the serious and urgent human rights situations that the Council has examined, with the willingness to listen to all the parties, including the voices that are often silenced, such as the victims of rights abuses.

In future periods, the U.N. Human Rights Council will have to discuss the best ways to tackle these crises, and ways to prevent them.

Q: Are there any indications of how the Council can deal with the problem?

A: When the Council reviewed its work and operations in 2011, among other issues it addressed the ways in which it can deal with serious cases of human rights violations.

Among other proposals, the draft suggested establishing mechanisms that would act as external, objective and independent triggers, in the case of urgent situations. The initiative was discarded, and as a result the Council continues to face critical situations mainly through the means of holding special sessions of its members.

Q: What results have these special sessions had?

A: To an extent, the special sessions have proved quite successful at dealing with urgent situations. We have always managed to reach the minimum number of 16 member states to sign the request to convene such a session, as seen by the 19 special sessions held so far.

However, it must be acknowledged that the results of these sessions always depend on negotiations.

Q: This year, what stands out is that the situation in Syria called for four special sessions of the Council.

A: Some people may think that holding four special sessions did not really help to improve the situation on the ground in Syria.

However, by holding so many special sessions as well as an urgent debate, the Council has fulfilled its political responsibilities, keeping a close watch on events and sending a commission of inquiry charged with gathering information and evidence, with a view to potential future criminal proceedings in respect to the current conflict.

Q: What are your conclusions about this case?

A: After many months of crisis and armed conflict, there is mounting pressure not only to come up with political solutions, but also to hold accountable those responsible for crimes against human rights and against international humanitarian law.

As a consequence, the priority that emerges is a political solution with peace, justice and an end to impunity.