GENEVA, Mar 9 2012 (IPS) - Decades after peasants’ networks have advocated for a new legal instrument to protect the rights of small farmers to land, seeds, traditional agricultural knowledge and freedom to determine the prices of their production, the United Nations Human Rights Council (UNHRC) may decide to start drafting a declaration on peasants’ rights next week. 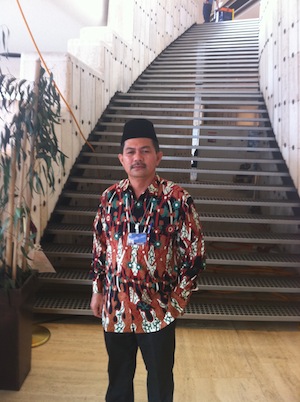 “The idea of an international declaration on peasants’ rights comes from our (base) because many small farmers don’t have access to land, work, water and seeds,” Henry Saragih, the general coordinator of Via Campesina, a movement representing more than 200 million small farmers around the world, told IPS.

For the Indonesian activist, labelled by some international media as “one of the twenty green giants of our world”, next week could mark the first victory in a battle that has gone on for more than a decade: the UNHRC will discuss a study of its Advisory Committee that recommends the elaboration of a new legal instrument on the rights of peasants, on the basis of a declaration proposed by the expert body.

This instrument would be modelled on the U.N. Declaration on the Rights of Indigenous Peoples, that has been replicated in some national constitutions and local tribunals.

It would complement another long-term battle of Via Campesina: the recognition of the principle of food sovereignty, namely the right of each country to decide what to produce locally and how much to rely on international trade, with a priority given to local production and consumption.

“Since 2001, we have brought the issue of peasant’s rights to Geneva,” Saragih continued. We have found understanding by some governments, non-governmental organisations like CETIM and FIAN, the expert Christophe Golay and the former rapporeur on the right to food, Jean Ziegler, (along with his successor), Olivier De Schutter. And after the 2008 food crisis, the world has become more sensitive to the problems of the small farmer.”

“Today, almost one billion of the world’s people suffer from hunger and malnutrition. Among them, 80 percent live in rural areas and 50 percent are peasant families,” Melik Özden, director of the Geneva- based NGO CETIM (Centre Europe Tiers-Monde), told IPS.

“These violations are due, among others, to the lack of agrarian reforms and aid to family farmers, forced displacement of peasants, confiscation of seeds by transnational corporations through the enforcement of intellectual property rights and the criminalisation of activists and peasant leaders.”

He adds that in recent years large scale land grabbing by some foreign governments and transnationals, wide-scale production of agro-fuels and stock market speculation on agricultural commodities have significantly worsened peasants’ lives.

“Year after year, Via Campesina has alerted the HRC about the violations of the rights of peasants, their limited access to justice in most countries and the scarcity of complaint mechanisms at the international level,” Christophe Golay, author of the first drafts of the study and of the declaration told IPS.

“But it has also become clear that some important rights were not included in any available instrument, such as rights to land, seeds, traditional agricultural knowledge and freedom to determine the prices of agricultural products.”

Africa Mthombeni, from the Landless People Movement (LPM) in South Africa and also a member of Via Campesina, is convinced that a favourable decision in Geneva would be an important step forward. “The HRC is the intergovernmental forum that guides national policies and a declaration on the rights of peasants would oblige governments to take them seriously,” he told IPS.

“Land reform in South Africa is too slow,” he continued, “and as a result poverty and unemployment are very high. The majority of our people live on social grants. The land question in South Africa has improved only insignificantly since the end of apartheid and more than thirty million people are still landless.”

He explained that 100,000 commercial farmers and big corporations own 80 percent of arable land, with 13 percent left to traditional communities. Only seven percent of land has been transferred since 1994, yet the government pledged to release 30 percent by 2014. And most of this transfer takes place in the form of cash, not real land delivery.

But while most developing countries seem to be in favour of a declaration – particularly states like Indonesia, South Africa, Bolivia, Venezuela and Cuba – many industrialised nations are rather sceptical if not openly against the proposed declaration.

While officially these countries have declared that there is “no need” for a new instrument, NGOs believe the indsutrialised world is rather scared by the implications of the Advisory Committee’s draft declaration; especially clauses such as the right to reject intellectual property rights on resources and certification schemes established by transnational corporations.

The WTO has also declared its opposition to a model of agriculture that is hardly compatible with the current system of “free” trade.

The outcome of the discussion is still open. Jean Feyder, ambassador of Luxembourg to the U.N., considers it is “very important to support small farmers that were marginalised for so long. Therefore, we would be very satisfied if we could get a group of countries from all continents to support the proposal of the Advisory Committee and agree on a process: either the creation of a working group to draft the declaration, or the appointment of a special rapporteur on peasants’ rights.”

“This declaration would be very important for us,” Saragih concluded. “It would help us monitor the way in which countries respect peasants’ rights. Many international institutions have repeated it over and over again: to feed the world, we need to support small scale farmers.”