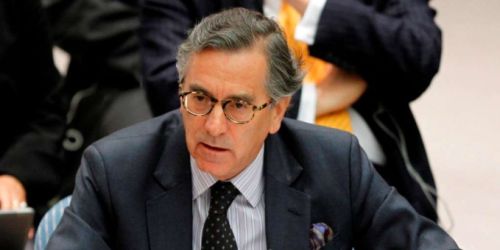 Néstor Osorio: “Young people are and always have been involved in the origins of the biggest innovations.” Credit: UN Photo

GENEVA, Apr 15 2013 (IPS) - Innovation, as the fruit of science and technology, will play a fundamental role in the Sustainable Development Goals that could go into effect in 2015, says Néstor Osorio, president of the United Nations Economic and Social Council.

In its next session, in September, the U.N. General Assembly will receive the first draft of the SDGs currently being drawn up with the input of governments, scientists and social organisations.

The Economic and Social Council (ECOSOC) is also taking part in the drafting process, and will discuss the question in its Annual Ministerial Review in Geneva, next July.

If they are approved, the SDGs will build upon the Millennium Development Goals (MDGs), which were adopted by the international community in 2000 in New York with a 2015 deadline.

Using 1990 as a baseline, the governments committed themselves to halve the proportion of people who experience hunger and live in extreme poverty, reduce infant and maternal mortality by two-thirds, achieve universal primary education, promote gender equality and empower women, combat HIV/AIDS, tuberculosis, malaria and other major diseases, ensure environmental sustainability and achieve a global partnership for development.

Osorio, Colombia’s permanent representative to the U.N., explained some aspects of the SDGs in an interview given to IPS during a recent visit to Geneva.

Q: Do you think innovation should be one of the goals for this millennium?

A: I believe it is a cross-cutting issue within many of the objectives for the post-2015 period. We’re talking about the SDGs – that is, how to do something beyond the MDGs and bring together industrialised and developing countries in an ongoing process of irreversible compliance with fundamental goals for integral sustainability.

Q: In other words…

A: We’re talking about water conservation, more liveable cities, food security, infrastructure and curtailing (greenhouse) gas emissions. We have to decarbonise the planet. And all of this forms part of innovation.

Q: Who would be the actors involved in this task?

A: Those who can participate in a very efficient manner, as we have seen, are young people.

Young people are and always have been involved in the origins of the biggest innovations. Microsoft, Facebook and others have been created, innovated, by 20 or 25-year-old kids.

So there’s a very important link here: how innovation and connection and preparation of future work go together. And when it comes to gender equality, we’re talking about the same thing. In other words, it’s a cross-cutting issue.

A: I think they could do it with a fundamental commitment by governments, which translates into budget allocations.

The partnership between government and private sector is also essential throughout this process. I’ll cite an example of what we have done in Colombia: the policy of President Juan Manuel Santos has been to earmark – and a law was approved to this end – a portion of oil and mining industry royalties to the Institute of Sciences and Technology.

Q: And with respect to the private sector?

A: Companies gradually discover what their needs are and how they have to adapt to the requirements of sustainability.

(For example), there can’t be investment in projects that use huge quantities of water, because that is wasteful. Companies have to adapt to the requirements that the world presents.

Q: And with regard to the state?

A: The public sector must be aware of the importance and significance of science, technology, culture – and what they bring in terms of innovation – for the development of society. For the improvement of infrastructure, cities, transportation, and for providing better living conditions for men and women.

That’s why it is very important for it to translate into legal instruments, budget allocations and government plans.

Q: What can be expected of the ECOSOC sessions in July?

A: The debate in the High Level Segment, as it’s called, will be the culmination of the ministerial meeting.

Science, technology and culture is the theme this year for ECOSOC. But the question of financing will also be discussed.

The economic situation in the industrialised world is very serious because it has consequences, what I call collateral damages, because as incomes and economic conditions have declined in those countries, there is less money for financing development and a lower propensity for technology transfer.

I hope that very concrete policy recommendations will come out of July’s sessions.

Q: What is the climate ahead of the meeting?

A: Two weeks ago I was in Tanzania with all of the African ministers, and I was surprised to see that there is real awareness and interest in giving science and technology a predominant place in government priorities.

Q: Do you have an overview of innovation in developing countries?

A: In agriculture, immense progress has been made to increase productivity and fight pests and diseases. This is already common in coffee, cacao and cereals.

Research in India for boosting the productivity of grains and guaranteeing food security has been extraordinary. In Brazil, the new coffee-growing techniques, on 100-hectare plantations with permanent irrigation and fertilisation, have multiplied productivity 30- or 40-fold.

Q: And what about innovations with environmental effects?

A: Yes, those too, especially in different areas of agriculture, with improvements of rural conditions. For example, one concrete innovation is harnessing small waterfalls to produce energy.

I’ve seen how small turbines have been created to use a waterfall just one metre high to provide lighting in the home of a small farmer.

It’s not rocket science – or CERN (European Organisation for Nuclear Research) science – but simple things. It’s about creating grinding machines that don’t waste water. For example, in Colombia, a coffee pulping machine was developed that takes the beans and processes them with a minimum amount of water, which is later recycled and does not end up causing pollution.