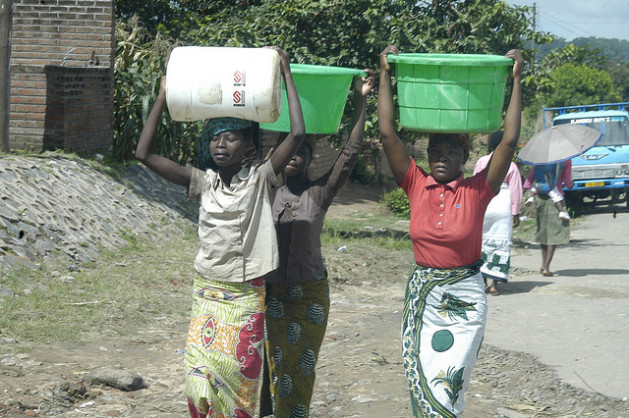 Women return from fetching water in Malawi. Over 40 percent of all people without improved drinking water live in sub-Saharan Africa. Credit: Charles Mpaka/IPS

UNITED NATIONS, Apr 2 2013 (IPS) - The United Nations apparently lacked the online resources of the fast-growing digital age when it created its highly-touted Millennium Development Goals (MDGs) in 2001, with a targeted deadline of 2015.

But as it readies to formulate its post-2015 economic agenda, the world body says it is one step ahead this time around.

One of the failures of the current MDGs is that they were not drafted with sufficient input from the developing world and did not reach out to marginalised groups.

The United Nations is now reaching out to a vibrant online community, dialoguing with governments, civil society, the private sector and think tanks to create a new set of Sustainable Development Goals (SDGs) for 2015 and beyond.

Olav Kjorven, assistant secretary-general and director of the Bureau for Development Policy at the U.N. Development Programme (UNDP), told IPS, “The United Nations has so far engaged more than 200,000 people from 189 countries through a mix of digital media, mobile phone applications, conferences, and paper ballot surveys.”

The “global conversation”, as the U.N. dubs it, is an initiative which was officially launched last month and will continue through the end of 2015.

Kjorven said U.N. teams based in the field are making sure that groups usually absent from participation in global processes – for example, women, indigenous communities, the youth, people with disabilities – are consulted on what they see as priorities for development of their communities.

The proposed SDGs, which could range anywhere between 10 to 20 or even more, are expected to include sustainable production and consumption, revitalised global governance, protection of the global environment and strengthening of goal-implementation.

A high-level panel, appointed by Secretary-General Ban Ki-moon, is expected to submit its final report on a post-2015 development agenda when it meets in New York at the end of May.

In a report titled “The Global Conversation Begins”, released last month, the United Nations said it has facilitated “an unprecedented series of consultations with people the world over to seek their views on a new development agenda to build on the success of the MDGs.”

The study said that face-to-face meetings have been magnified by an active and growing online community, with people offering their opinions and knowledge, and participating in MY WORLD – the U.N. global survey on priorities for the next development agenda.

Asked to elaborate, Kjorven told IPS that in Peru and Ecuador, the U.N. Country Teams are placing a particular focus on children, young people, women, and grassroots leaders from the Amazon region.

In Colombia, he said, consultations with indigenous organisations have yielded a proposal for five specific goals for the indigenous people of Colombia.

In Uganda, a mobile phone text message campaign has reached 17,000 people who have voiced their opinions on issues that they care about.

“In Nigeria, for example, we will be reaching out to 150,000 people in communities in 32 different states and allow them to join MY WORLD in the format of printed ballots,” he noted.

Asked if the findings give any strong indications as to what the priorities should be in the post-2015 development agenda, Kjorven said there were three emerging priorities.

First, the progress on MDGs should be accelerated and adapted to contemporary challenges, such as growing inequalities within countries and the impact of globalisation.

Second, the consultations point to the need for a universal agenda to address challenges like environmental degradation, unemployment, and violence.

Third, people want to participate, both in the agenda-setting as well as monitoring the progress in implementation of the Post-2015 framework.

Farah Mihlar, conflict prevention coordinator at the London-based Minority Rights Group International (MRG), told IPS that “organisations like MRG have tried to encourage our partners from across the world to participate in these dialogues and consultations, but it is certainly a very limited process”.

She said post-2015 MDGs both target and impact the poorest, most marginalised people, and “unfortunately they are unlikely to have the resources or the know-how to participate in these processes.

“One of the failures of the current MDGs is that they were not drafted with sufficient input from the developing world and did not reach out to marginalised groups such as minority communities,” she noted.

The United Nations should have learnt from these mistakes and rectified the system to be able to include the voices of the poorest and most marginalised peoples, she added.

“For the next set of SDGs to be successful and have an impact they cannot be drafted by elite high-level panels from comfortable conference rooms in capital cities”, she said, but “they must include the voices of the communities and people who the MDGs affect and target.”

It is still not too late, said Mihlar, because many international organisations and U.N. agencies work with partner organisations in developing countries and “there is still time to reach out and include their voices into the decision making process”.

Meanwhile, in a statement released last month, a coalition of activists said civil society organisations are “deeply concerned about the direction the high-level panel may take with regards to the roles of government, business and multilateral institutions in society.”

The eight “red flag” issues raised by civil society include land and water grabs; the extractives development model; a disregard for planetary boundaries; a lack of gender justice; the current global economic and financial architecture; disregard of human rights; conflicts and violence and accountability; and corruption.

“We need to urgently address the ‘poison threads’ in society,” says Amitabh Behar, co-chair of the Global Call to Action Against Poverty.

He specifically referred to “corporate land grabs, mega-mines, unjust global trade rules, financial speculation, corruption and the privatisation of essential social services, which are heightening inequalities, ruining our environment and impoverishing communities across the globe.”

“The poison threads in our society often fuel violence and conflict as well,” added Marta Benavides, co-chair of the Global Call to Action Against Poverty and a convener of the Feminist Task Force.

“Greed, struggles for resources and a lack of decent work are behind so many of the world’s wars. No society can develop in an environment of fear and insecurity. Real peace is an essential precondition for development and the high-level panel must address it.”