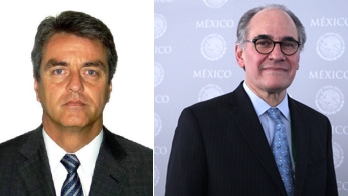 GENEVA, Apr 30 2013 (IPS) - The complicated challenge of invigorating the debilitated World Trade Organisation (WTO) and the multilateral trade system that it governs will fall, for the next four years and for the first time ever, to a Latin American.

The 159 member states of the WTO will choose between Roberto Carvalho de Azevêdo of Brazil and Herminio Blanco of Mexico, the two candidates for the post of director-general of the organisation who have weathered the complex selection process that began Dec. 1.

The decision between Azevêdo and Blanco will be known on May 8, but will not be formally announced until May 31. The current director-general, Pascal Lamy of France, will conclude his two consecutive terms of office that began in 2005, on Aug. 31, and his successor will take up the post on Sept. 1.

Lamy will be leaving unfinished the Doha Round of talks which he was instrumental in promoting in 2001, as EU Commissioner for Trade.

Gloom is cast on the climate of talks at the WTO by global economic news. The crisis has repercussions on the trade policies of the vast majority of the members of the trade system.

The WTO Secretariat, which early in the life of the institution was pleased with double-digit annual growth in world trade, now has to recognise the trade contraction.

In 2012, trade growth of two percent represented a sharp fall compared with 2011, when it grew by 5.2 percent. For this year, growth of 3.3 percent is forecast, lower than the average of 5.3 percent over the last two decades.

After eight years of leadership by Lamy, the multilateral system appears debilitated by the proliferation of bilateral and plurilateral trade agreements, encouraged mostly by industrialised nations.

Behind these failures in achieving a balanced opening of international trade flows is the reluctance of countries of the North to attend to the development needs of the countries of the South, a constant feature since the creation of the WTO in 1995.

The extent of the discord is clear at the present WTO negotiations aimed at achieving a modest agreement to keep up appearances at its next ministerial conference, to be held in Bali, Indonesia Dec. 3-6.

Industrialised countries are pushing for trade facilitation, such as increased speed and efficiency of border controls for trade goods. Developing nations fear that such an agreement will only increase their imports without benefiting their exports.

Longstanding demands, such as differential treatment for developing countries, a special trade regime for the Least Developed Countries (LDCs) and arrangements to mitigate the effects of the food crisis, have again fallen foul of stumbling blocks in the discussions on the draft Bali agreement.

The difficulties tripping up the trade negotiations have apparently not been reflected so far in the process of designating the new WTO director-general.

Seven other candidates from different countries were eliminated in earlier stages of the selection process. In the first phase, Alan John Kwadwo Kyerematen of Ghana, Anabel González of Costa Rica, Amina Mohamed of Kenya and Ahmad Hindawi of Jordan were deemed unlikely to command a consensus.

In the second stage, concluding Apr. 24, Mari Pangestu of Indonesia, Tim Groser of New Zealand and Taeho Bark of South Korea were held to have insufficient support.

But the two remaining candidates for heading up the WTO, Blanco and Azevêdo, are backed by two blocs, the industrialised and the developing countries, respectively, with opposing trade interests.

Blanco was educated at the University of Chicago, associated with the neoliberal economic ideas that predominated in a large part of the globe in the last few decades of the 20th century. He was part of the nucleus of this school of thought which governed the Institutional Revolutionary Party (PRI), and therefore Mexico, from 1985 to 2000.

But his most significant feature is his participation as chief negotiator, between 1990 and 1993, of the North American Free Trade Agreement (NAFTA), which came into effect Jan. 1, 1994.

Although he has no practical experience of WTO affairs, it is taken for granted that Blanco’s candidacy has the support of his NAFTA partners, the United States and Canada, and will benefit from the influence they can exert on the rest of the world.

For his part, Azevêdo has demonstrated his negotiating skills at the WTO, where he heads the Group of 20 developing nations, a coalition proposing the reversal of protectionist policies in agriculture applied by industrialised countries.

He won resounding victories for his country in two disputes before the WTO, one against U.S. cotton subsidies, and one against the EU for similar protectionism for sugar growers.

But above all, Azevêdo’s candidacy rests on Brazil’s foreign policy over the past decade, as an emerging nation together with Russia, India, China and South Africa in the BRICS bloc, and its openness to offering a helping hand to other developing countries on every continent.

Whoever is appointed will find a paralysed WTO, riven with dissensions that obstruct the reaching of understandings.

For instance, on Apr. 24 a panel of experts presented the report “The Future of Trade: The Challenges of Convergence”. The make-up of the panel, decided exclusively by Lamy, had been questioned by governments and NGOs.

During the presentation, Deborah James, of the Our World Is Not for Sale (OWINFS) network, objected that in spite of their WTO membership, there were not any representatives of LDCs on the panel, and only one African and one Latin American. The rest were almost all from developed countries and the business sector, while there was only one workers’ representative, she said.

“It seems that this report was actually drafted in large part by the Secretariat, and according to several panelists many of their comments were not well reflected” in the final text, James complained.

Sanya Reid Smith, also of the OWINFS network of NGOs and social movements, observed that “the report says that trade is a means, not an end, so presumably for developing countries, development is the end goal.

“So it is interesting then that the report explicitly says in a number of places that there should be ‘convergence of trade regimes,’ but it does not mention convergence of levels of development,” the activist said.

Jürgen Thumann, the president of BUSINESSEUROPE, an organisation representing 20 million companies in 35 countries, was annoyed by the interventions from the OWINFS representatives.

James told IPS that Thumann’s comment showed BUSINESSEUROPE is intolerant of input from the public, as well as being sexist and ageist.

“His insulting tone epitomised the panel’s lack of transparency and non-inclusiveness,” she maintained.