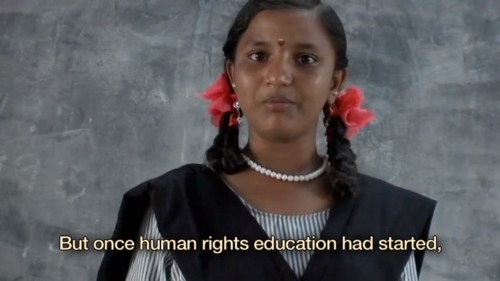 A dalit girl in India explains in the short film that her teachers stopped hitting the children with canes as a result of the human rights training.

GENEVA, Sep 20 2012 (IPS) - The impact of human rights education, a rising star, is highlighted in a short documentary sponsored by United Nations experts and civil society.

The short film presented Wednesday, “A Path to Dignity – The Power of Human Rights Education”, shows how human rights teaching and training can bring about major transformations in victims and potential perpetrators of abuses.

Dalit (formerly “untouchable”) children in India, a Turkish woman abused by her husband since she was married off as an adolescent, and police in the southern Australian state of Victoria describe in the film how their lives changed radically thanks to human rights education.

United Nations High Commissioner for Human Rights Navi Pillay says at the start of the film that “Full realisation of human rights requires all human beings to be aware of their and other people’s rights and of the means to ensure their protection.”

“The message of this DVD says that everything starts from a single person,” Kimiaki Kawai, programme director for Peace Affairs at Soka Gakkai International (SGI), told IPS.

“If the single person stands strongly, determined, then something can happen with an impact to the society. So, in that sense education is something like empowerment – to giving knowledge, giving understanding, to sharing wisdom. So that somebody can stand firm to contribute to society,” said Kawai

The film was produced by the SGI, a Japan-based lay Buddhist movement, the international movement Human Rights Education Associates, and Pillay’s office.

Dalit children received training on human rights from non-governmental organisations in India, which enabled them to fight and overcome some of the most degrading effects of the discrimination that they suffer as a result of the Hindu caste system.

And the woman in eastern Turkey, who was hunted by her own family after she decided to leave her abusive husband, found comprehension and support from an association of Turkish women, and eventually managed to free herself from her arranged marriage and change her name.

Police in the Australian state of Victoria, meanwhile, were given human rights training from their superiors and from specialised organisations, which brought down the number of complaints of human rights abuses committed in the course of their policing work.

At the presentation of the short film in the Palais des Nations in Geneva, the diplomat pointed out that his country had abolished its army in the 1940s and then decided to invest in education and health the funds that previously went to the military.

Hedwig Jöhl, a representative of the Congregation of Our Lady of Charity of the Good Shepherd, said a country without an army is a good example for human rights education.

Guillermet-Fernández said the 28-minute documentary, directed by filmmaker and international relief worker Ellen Bruno, was a tool that could have a lot of impact in the field of human rights.

“But human rights education must still overcome many challenges,” the Costa Rican diplomat said. “We need to be innovative, creative and do things like this (film).”

Furthermore, he said, governments and civil society must work to keep the question of human rights education on the agenda of international organisations, in the Human Rights Council but also in the work of the General Assembly – two of the highest-level U.N. bodies.

One of the biggest challenges is to educate national authorities and politicians, Guillermet-Fernández said.

Kawai stressed that “Education is not a process to give some knowledge to other people. Interaction should be the core of education…Education is to inspire somebody to think by themselves and stand up, which also influences me.”

Referring to the case of the young Turkish woman shown in the film, who expressed a discrepancy between traditions and human rights values, Kawai told IPS that such differences could be overcome with “balance.”

“And balance comes from talks, not from silence,” he said. Differences of opinion arise in interactions between people, and “how can we solve the differences, the discrepancies…dialogue should come first, not violence,” he underlined.