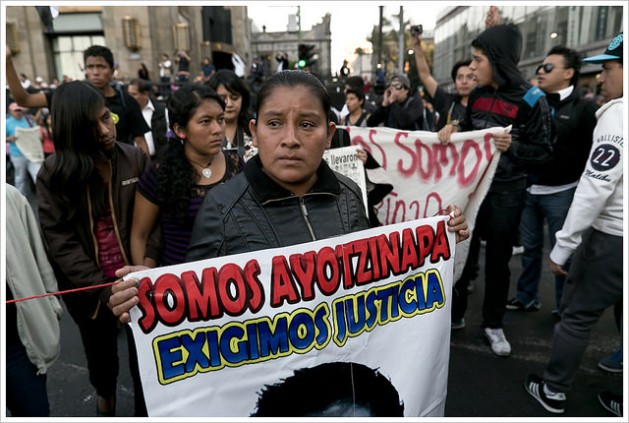 A protester at a rally against the disappearance of 43 students in the southwestern Mexican state of Guerrero holds a sign that reads: ‘We Are Ayotzinapa. We Demand Justice.’ Credit: Montecruz Foto/CC-BY-SA-2.0

UNITED NATIONS, Sep 7 2015 (IPS) - A group of independent investigators has roundly dismissed the Mexican government’s claims that the 43 students who went missing in the southwestern city of Iguala last fall were burned to ashes in a garbage dump, reigniting an international outcry against the disappearance and heaping pressure on the government to provide answers to families of the victims.

The 500-page report released this past weekend by an expert group appointed by the Inter-American Commission of Human Rights (IACHR) refutes key aspects of the government’s official story, concluding in no uncertain terms that there is “no evidence” to support the Attorney General’s findings that the college students were executed and burned by a drug gang.

“Even with the world watching and with substantial resources at hand, the authorities proved unable or unwilling to conduct a serious investigation,” he added.

HRW is calling on the government to urgently address its own flawed investigation, which was declared ‘closed’ this past January, and bring those responsible to justice.

The students, all members of the Ayotzinapa Rural Teachers’ College in Mexico’s southern Guerrero state, disappeared on Sep. 26, 2014.

Amid massive protests across the country and around the world, the government concluded that the students had commandeered several buses and traveled in them to a protest in Iguala. Following clashes with local police, the students were allegedly detained and then handed over to a criminal gang, who presumably executed them before burning their bodies in a municipal dump.

But the IACHR investigators say those “conclusions hinge on allegedly coerced witness testimony that is contradicted by physical evidence,” HRW said Sunday.

HRW points out that “crucial pieces of evidence, such as blood and hair” were vulnerable to contamination and manipulation during the investigation, and “in July 2015, more than nine months into the investigation, the group discovered that multiple articles of clothing belonging to the victims had been collected but never examined.”

Perhaps the most damning revelation involves the government’s claim that the drug gang responsible for the students’ deaths built a pyre and fed it over a 16-hour period with scrap material like wood and tires, as well as small amounts of fuel.

Quoting the IACHR study, the Guardian reported Sunday: “It would have required 30,000 kg of wood or 13,330 kg of rubber tyres and burned for 60 hours in order to consume the bodies. [The report] adds that feeding the pyre would have been impossible, and that a conflagration of those dimensions would have left obvious evidence in the surrounding area, which an inspection of the site failed to find.”

Other major flaws in the government’s official version of events include so-called ‘confessions’ extracted from suspects under conditions likely amounting to torture and authorities’ failure to inspect the offices of members of municipal police identified by eyewitnesses.

The expert panel spent six months on the investigation, reviewing existing government evidence, conducting in-depth inspections of the crime scene and interviewing surviving witnesses and family members of the deceased.

Earlier this year, the United Nations Committee on Enforced Disappearance highlighted shortcomings in the government’s investigation of the Ayotzinapa case, and called on the government to do more to tackle impunity.

HRW estimates that there are currently 300 open investigations relating to enforced disappearances in Iguala alone, and over 25,000 people reported as ‘missing’ nationwide.

“As of April 2014, no one had been convicted of an enforced disappearance committed after 2006, according to official statistics,” the rights group concluded.