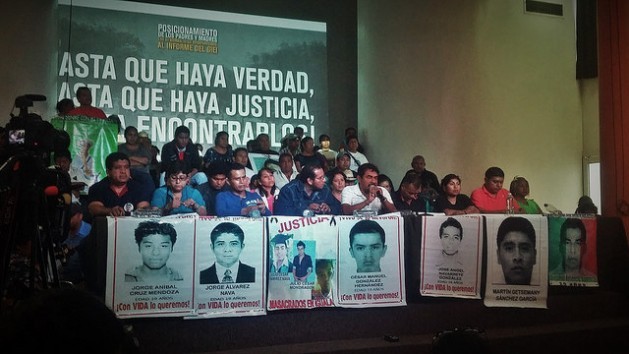 Parents and other relatives of the 43 missing students at a Sep. 6 meeting with the press in Mexico City shortly after the five members of the Interdisciplinary Group of Independent Experts announced their initial conclusions on the serious shortcomings in the investigation of the case. Credit: Daniela Pastrana/IPS

Sep 8 2015 (IPS) - Nearly a year after the forced disappearance of 43 students in Mexico, the government’s investigation is back to the drawing board, after a group of independent experts refuted all of the official arguments.

“The investigation must be completely refocused and rethought,” said Spanish psychologist Carlos Beristáin, one of the five members of the Interdisciplinary Group of Independent Experts (IGIE) designated by the Inter-American Commission of Human Rights (IACHR), which presented its report on Sunday Sep. 6.

The IGIE was set up by the IACHR under an agreement with the Mexican government and the representatives of the victims’ families, to provide international technical assistance in the investigation of the Sep. 26, 2014 municipal police ambush of the buses the 43 students had boarded.

The male victims were students at one of Mexico’s 17 rural teachers colleges, in Ayotzinapa in the southwestern state of Guerrero.

“They weren’t burnt in the Cocula dump. That event, as it was described, did not happen.” -- Francisco Cox

The IGIE’s initial mandate was from Mar. 2 to Sep. 2. The experts reviewed the 115 volumes of the case file, visited the area, and interviewed the families of all of the victims.

The 550-page report is a catalog of the errors committed by the investigation headed by Mexico’s attorney general’s office: leads that were not investigated, evidence that was destroyed, omissions, major inconsistencies in witness statements, reports of torture, false conclusions, and a disconnect between the investigations of the ambush itself and the final fate of the students.

Above all, it dismantles the central thesis, presented in January as the “truth” by former attorney general Jesús Murillo Karam, that the students were killed and their bodies burnt in a municipal dump in Cocula, next to Iguala, the town where they were ambushed.

The government’s theory was based on testimony from three alleged participants in the massacre, who said that for 12 hours they fed the fire, using tires, wood, diesel and other fuels, before crushing the bones into ash and gathering the rest in garbage bags that they threw into a nearby river.

“They weren’t burnt in the Cocula dump,” said Chilean lawyer Francisco Cox. “That event, as it was described, did not happen.”

The IGIE’s conclusion was based on research by José Torero, a professor in fire safety engineering at the University of Queensland in Australia. He said it would have taken 30 tons of wood, 13 tons of tires and at least 60 hours to incinerate the 43 bodies.

The report cleared up other doubts such as the presence of the army in at least two of the possible crime sites, and the possibility that the students were attacked by mistake. 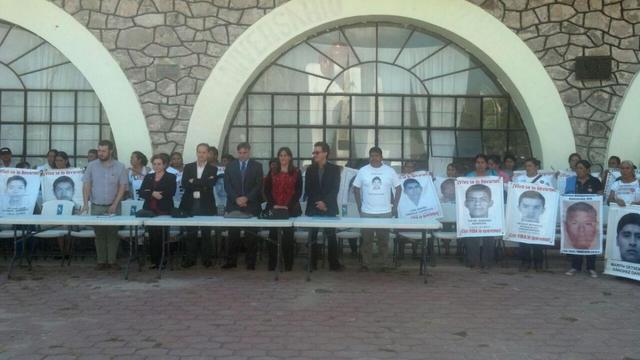 The five members of the Interdisciplinary Group of Independent Experts meeting with students and relatives of the victims during their visit to the Escuela Normal Rural Raul Isidro Burgos de Ayotzinapa, the rural teachers college attended by the 43 students who were disappeared on Sep. 26. Credit: Courtesy of CENTROPRODH

“The students were being watched by state and federal authorities and the army,” Guatemalan lawyer Claudia Paz said. “It wasn’t a question of them not knowing who (the students) were or what they were doing.

“The students weren’t carrying arms, no police were injured, they reached the city long after the event and they did not plan to enter the city,” she added. She was referring to an alleged motivation: that they wanted to boycott a political rally for María de los Ángeles Pineda, the mayor’s wife, who is accused of ties with a local drug gang in Iguala.

On the other hand, there was a lead that was not investigated, where a key role could be played by a bus from the Estrella Roja company, which pops up in the case file before disappearing again. That “fifth bus” was the last to leave the bus station with students aboard, setting off in a different direction.

The IGIE reported that Iguala is a hub for the trafficking of heroin to the United States, which is sometimes shipped in passenger buses. It concluded that the students could have unwittingly boarded a bus carrying drugs, which would explain “such an extreme and violent reaction and the massive character of the attack.”

The group of experts explained that the simultaneous attack lasted at least three hours in nine different places, and was intended to keep the buses from leaving the city.

The extent of the involvement by the police at different crime scenes indicates the level of coordination and command needed to carry out such an action, the report states.

The IGIE notes that the investigation was fragmented from the start, and that at one point there were 52 prosecutors working on it separately, without sharing information among themselves.

The experts set forth 20 recommendations, including: to unify the investigation, to investigate public employees who hindered or blocked the inquiries, and to focus principally on the hypothesis that the main reason for the ambush was drug trafficking.

Mexican President Enrique Peña Nieto announced on Twitter that he instructed investigators to take into account the report’s theories and findings.

In a press briefing where questions were not allowed, Arely Gómez, named attorney general in March, offered a new investigation at the garbage dump and a six-month extension of the IGIE’s work.

The parents of the students refuse to accept that their sons are simply missing.

They feel they have been cheated by the authorities, and demanded that the president meet with them before Sept. 10. They also called for the IGIE to continue operating until the students are found.

The question now is: “What next?”

“The experts’ central recommendation is for the attorney general’s office to incorporate the report in the investigation and in the case files,” lawyer Abel Barrera, the director of the Tlachinollan Mountain Human Rights Centre, which is providing the victims’ families with legal support, told IPS.

Mario Patrón, of the Miguel Agustín Pro Human Rights Centre, commented that the lines of investigation into the political-criminal connection must be exhausted. “A good sign is that the group of experts was endorsed; as long as they are operating we can have guarantees,” he told IPS.

But not everyone is so optimistic. In the attack, not only were 43 students forcibly disappeared, but six were killed, including two students shot at point-blank range and another who was tortured and then murdered, and 40 were injured (two are still in coma).

Since October 2014 more than 100 people have been arrested, including Abarca and his wife. But no one has been sentenced, and not all of the arrests were linked to the students.

The former mayor is facing charges for another of the 55 disappearances reported during his term. The 60 people prosecuted in connection with the case of the students have been charged with kidnapping, not forced disappearance.

“Imagine if they do this in the case of the 43 students, which has made headlines around the world, what’ll they do with us,” said Mario Vergara, a representative of the Association of the Other Disappeared of Iguala, which groups relatives of victims of forced disappearance searching for the remains of their loved ones in the common graves that have been discovered in the area during the investigation of the missing students.

“I’m really grateful for the experts’ work, but until we find our missing family members, and those responsible are punished, this won’t go anywhere,” he told IPS.