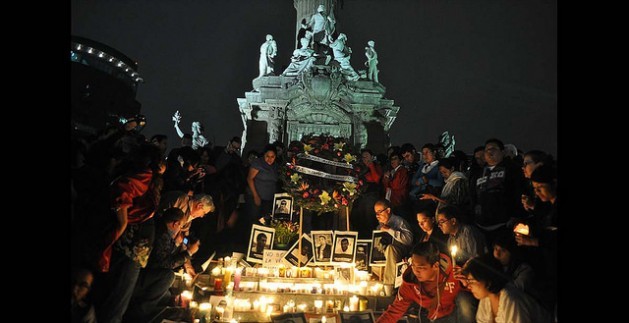 Demonstrators in a protest held to commemorate murdered reporter Regina Martínez at the Angel of Independence monument in Mexico City. Mexico accounted for 14 of the 43 journalists killed in Latin America in 2015. Credit: Lucía Vergara/IPS

MEXICO CITY, Apr 27 2016 (IPS) - Mexico is the most dangerous country in Latin America for journalists. In 2015 it accounted for one-third of all murders of reporters in the region, and four more journalists have been added to the list so far this year.

The latest, Francisco Pacheco Beltrán, was shot dead outside his home in the southern state of Guerrero on Monday Apr. 25. Pacheco Beltrán regularly covered crime and violence, which have been on the rise in connection with organised crime and drug trafficking. He worked for several local media outlets in Mexico’s poorest state, which is also one of the most violent.

His murder adds one more chapter to the history of terror for the press in Mexico in this new century, which has not only included the killings of 92 journalists, but also a phenomenon that is almost unheard-of in democratic countries around the world: 23 journalists have been forcibly disappeared in the last 12 years, an average of two a year.

And every 22 hours, a journalist is attacked in Mexico, according to the latest report by the Britain-based anti-censorship group Article 19.

“Violence against the press in Mexico is systematic and widespread,” said the former director of the organisation’s Mexico branch, Darío Ramírez, on the last International Day to End Impunity for Crimes against Journalists, celebrated each Nov. 2.

But violence and impunity are not the only problems faced by journalists in Mexico and the rest of the region.

“For us, the red zones are Mexico, Honduras and Brazil,” González said.

According to the Federation of Latin American Journalists (FEPALC), 43 journalists were killed in the region in 2015, including 14 in Mexico (besides two that were forcibly disappeared). Mexico is followed by Honduras (10), Brazil (eight), Colombia (five) and Guatemala (three).

Brazil’s National Federation of Journalists reported a 60 percent rise in journalists killed between 2014 and 2015. The highest-profile case was the murder of investigative reporter Evany José Metzker, whose decapitated body was found in May 2015.

Honduras and Mexico have a similar problem: the violence against journalists is compounded by a culture of impunity. 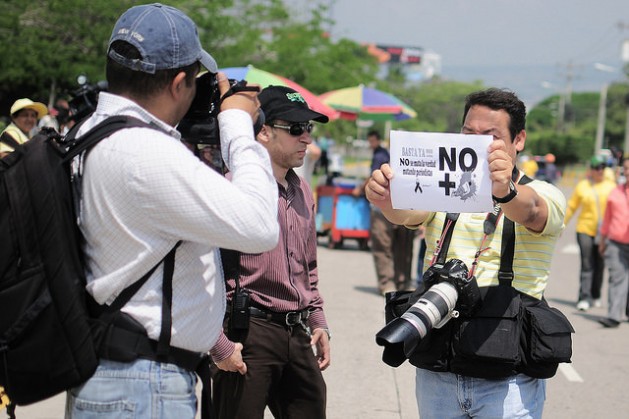 Honduran journalists protest an official secrets law that undermines their work. By means of laws and other mechanisms, some governments in Latin America have restricted access to information, the theme of World Press Freedom Day this year. Credit: Thelma Mejía/IPS

“In the first half of 2015, the Commission registered a worrying number of unclarified murders of communicators and media workers,” says the Inter-American Commission on Human Rights’ (IACHR) annual report on Honduras.

But violence is not the only threat faced by the media in Honduras. One of the Central American country’s leading newspapers, Diario Tiempo, which stood out for its defence of democracy during the 2009 coup that overthrew President Manuel Zelaya, was recently shut down.

The closure of the newspaper is linked to the downfall of one of the most powerful families in the country: the family of banking magnate Jaime Rosenthal, who is accused by the U.S. Treasury Department of laundering money for drug traffickers.

The freezing of the accounts of businesses in the family’s Grupo Continental conglomerate, as a result of that accusation, led to the closure of the newspaper, announced in October. As a result, the government was accused of taking disproportionate measures against the outspoken publication.

In a public letter, Rosenthal said “the circumstances that led to this suspension are very serious with regard to freedom of speech, social communication and democracy in our country, to the extreme that this is an atypical case in the Western world.”

A newspaper with a similar name, in Argentina, is an example of the other side of the coin in the region. On Monday Apr. 25, journalists from Tiempo Argentina, a Buenos Aires daily that closed down in late 2015, relaunched the publication, this time as a weekly.

Under the slogan “the owners of our own words”, the Tiempo Argentino reporters got their jobs back by forming a cooperative, similar to the format used by factory workers to get bankrupt companies operating again after Argentina’s severe 2001-2002 economic crisis.

“It’s really good to see that the more people organise, the more the competition between companies is overcome,” Cecilia González, a correspondent for the Notimex agency in the countries of Latin America’s Southern Cone region, told IPS from Buenos Aires.

But González said that in Argentina there are plenty of problems as well, and few positive answers like Tiempo Argentino. One of the big problems was President Mauricio Macri’s modification by decree of a law pushed through by his leftist predecessor in 2015 that outlawed monopolies by media companies.

On Apr. 18, Macri, who took office in December, told the IACHR that he would draft a new law with input from civil society. But reporters in Argentina are sceptical.

“Besides the more than 300 media outlets owned by the Grupo Clarín and which it will avoid losing, another monopoly is being built in the shadows, associated with La Nación, and they plan to get hold of the entire chain of magazines,” the Orsai magazine wrote.

But for the IACHR and its special rapporteur for freedom of expression, conservative governments are not the only ones causing problems.

In Ecuador, to cite one example involving a left-leaning administration, President Rafael Correa, in office since 2007, used the strength of the state to sue executives of the El Universo newspaper – Carlos, César and Nicolás Pérez – and its then editorial page editor, Emilio Palacio.

The president sought 80 million dollars in damages and three years in prison for libel after an editorial by Palacio alleged that he ordered police to open fire on a hospital full of civilians during a September 2010 police rebellion.

In December 2015, the IACHR accepted a petition accusing the government of the alleged violation of legal safeguards and freedom of thought and expression, and requesting legal protection.

Correa also took aim against one of Latin America’s best-known cartoonists. In 2014 a cartoon by Xavier Bonilla – who goes by the pen name Bonil – that depicted a raid by police and public prosecutors on the home of a political opposition leader enraged Correa, who launched a campaign against the cartoonist.

“Ecuadoreans should reject lies and liars, especially if the liars are cowards and haters of the government disguised as clever, funny caricaturists,” was one of the president’s outbursts against Bonilla.

As journalists in the region get ready for World Press Freedom Day, celebrated May 3, there are signs of resistance in some countries, although the climate is not the best for media workers.

One example is Veracruz, the Mexican state that has been in the international headlines for the alarming number of reporters who have been assaulted or killed.

On Apr. 28, the fourth anniversary of the murder of Regina Martínez, a correspondent for the local weekly Proceso, journalists belonging to the Colectivo Voz Alterna, who have battled hard in defence of the right to inform, in the midst of a climate of terror, will place a plaque in her honour in the central square of the state capital.

“We cannot forget, and we cannot just do nothing,” Vera Cruz reporter Norma Trujillo told IPS. Similar sentiments are voiced by reporters working in dangerous conditions around the region.
Edited by Estrella Gutiérrez/Translated by Stephanie Wildes