Media Come Together to Discuss Safety of Journalists, Fight Against Impunity

PARIS, Feb 3 2016 (IPS) - Amid continuing attacks on journalists, media representatives from around the world will meet in the French capital this week to discuss how to reinforce the safety of those working in the sector.

Organized and hosted by the United Nations cultural agency, UNESCO, this “unprecedented” meeting between media executives and the agency’s members states on Feb. 5 is an attempt to “improve the safety of journalists and tackle impunity for crimes against media professionals”, UNESCO said. 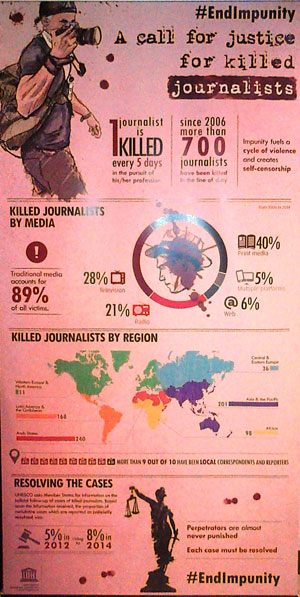 Journalism is one of the deadliest professions in the world. Credit AD Mckenzie/IPS

“As everyone knows, the problem has been increasing over the past five years of killing of journalists in different parts of the world, and the UN system as a whole has become more concerned about this in parallel,” said Guy Berger, director of UNESCO’s Division of Freedom of Expression and Media Development.

He told IPS that the UN has been putting “a lot of effort” into trying to get more action against these killings and that UNESCO has been working to create greater cooperation among various groups concerned with journalists’ safety.

But Berger said that the conference wanted to focus on what media organizations themselves could do “to step forward” and bring attention to the matter.

The day-long meeting – titled “News organizations standing up for the safety of media professionals” – will “foster dialogue on security issues with a view to reducing the high number of casualties in the profession”, UNESCO said.

The number of media workers killed around the world totaled 112 last year, according to the Brussels-based International Federation of Journalists (IFJ), whose president Jim Boumelha will speak at the conference.

The IFJ, which represents some 600,000 members globally, said that among the deaths, at least 109 journalists and media staff died in “targeted killings, bomb attacks and cross-fire incidents”. This number marks a slight decrease from 2014 when 118 media personnel were killed.

Reporters Without Borders (RSF), a group that defends freedom of expression, said in its report that the deaths were “largely attributable to deliberate violence against journalists” and demonstrates the failure of initiatives to protect media personnel.

The slayings included those of cartoonists working for the French satirical weekly Charlie Hebdo in January 2015. Following those attacks, UNESCO organized a conference then as well, under the heading “Journalism after Charlie”.

In the year since, many other media workers have lost their lives, in both countries at peace and those experiencing civil war.

Calling on the UN to appoint a special representative for the safety of journalists, RSF’s Director General Christophe Deloire says that the creation of a specific mechanism for enforcing international law on the protection of journalists is “absolutely essential”.

Deloire will present a safety guide for journalists at the conference, in association with UNESCO. This is part of the aim to “share good practices on a wide range of measures including safety protocols in newsrooms … and innovative protective measures for reporting from dangerous areas”, according to the UN agency.

Some 200 media owners, executives and practitioners from public, private and community media are expected to attend the conference, UNESCO said.

“The diversity of media represented, in terms of geography, size and type of threat encountered, is unprecedented and should contribute to the conference’s ability to raise awareness of and improve preparedness for the full range of dangers the media face worldwide,” the agency added.

Berger will moderate the first session, while debates in the second will be led by Christiane Amanpour, chief international correspondent for the broadcaster CNN and UNESCO Goodwill Ambassador for Freedom of Expression and Journalism.

Diana Foley, founder and president of the James W. Foley Legacy Foundation, is also scheduled to be among the speakers. The institution honours the work of American journalist James Foley, her son, who was abducted while covering the Syrian war and brutally killed by his captors in 2014.

One of the conference’s high-level sessions will focus on “ending impunity together” and will comprise “dialogue” between the media industry and UNESCO member states, according to the programme.

In addition, UNESCO publishes a biennial report that takes stock of governments’ replies to the organization’s request for information about “actions taken to pursue the perpetrators of these crimes”.

In its 2015 report, “World Trends in Freedom of Expression and Media Development”, UNESCO noted that some member countries were not submitting requested updates on investigations into attacks against the media. However, the response rate had still risen to 42 percent (24 out of 57 countries) from 22 percent in 2014.

One of the issues not on the agenda at the conference is the number of UNESCO member states that imprison journalists or attempt to suppress freedom of expression. Experts acknowledge that this is also a topic that needs addressing, but some say that a distinction between the issues needs to be made.

He said that governments have “the primary responsibility to protect everybody and to protect their rights,” but that not all governments live up to this task.

“That doesn’t mean that they shouldn’t,” he added. “If you sign up to these international declarations, you actually have to match your words with your actions.”

The public, too, could be more aware of the challenges that media workers face and support the calls for safety and protection.

“Nobody wants to be out of line with public opinion, and the stronger public opinion is, the more governments actually see that it’s important to act,” Berger said. “Governments need journalists, even if they don’t like them, and they need them to be safe.”