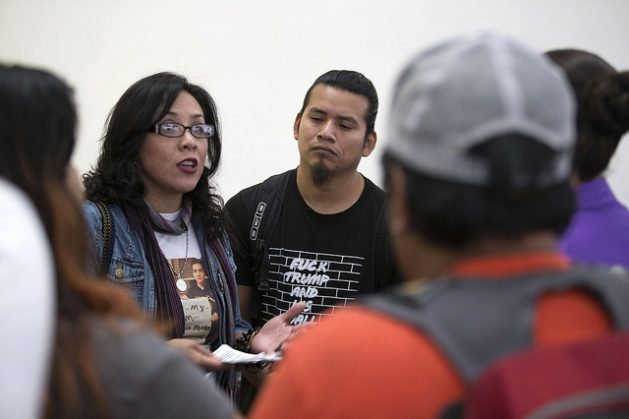 Ana Laura López, an activist for the rights of deportees, assists a group who have just landed at the Mexico City International Airport on one of three flights arriving each week with migrants deported from the United States. Credit: Julia Sclafani / IPS

MEXICO CITY, Oct 19 2017 (IPS) - They work for years to bolster the economies of two countries. For one, the United States, they provide labour and taxes; for the other, Mexico, they send remittances that support tens of thousands of families and communities. Then they are deported, and neither government takes into account their special needs.

“These are the inconsistencies of the U.S system, which does not give you legal status, but it does give you a number to pay taxes every year,” migrant rights activist Ana Laura López told IPS.

She herself was deported in September 2016, after working for 16 years in Chicago, Illinois.

“Every two weeks they deducted retirement benefits, which remain in an account, on ‘stand by’, until you gain legal immigrant status – but that’s very hard to achieve,” she said.

"The policies of the United States now make it much more difficult to return, which means a lot of people are going to have to stay in Mexico, and that is a problem we are recognising: how the person is reintegrated into the labour market and the social fabric: these links have to be restored. These are immense challenges for society and institutions." -- Cristopher Gascón

“I was poor in Mexico, I did not have access to a visa, so I went illegally. I had just the first years of high school and I finished high school in the United States,” said 42-year-old López.

“I worked in the Mexican consulate, I was paid by a federal agency, and had a good income, I was living my ‘American dream’. I considered myself a citizen because I have a squeaky clean criminal record, but yet, I never achieved legal status. The worst crime is to be an immigrant.”

Lopez was deported on the same plane in which she was about to travel to Mexico, with a ticket she had bought. She intended to return temporarily and seek to regularise her immigration status. She believes she was deported because of her activism on behalf of migrants and workers in the United States.

In Mexico she has had to start from scratch, taking jobs where she earns eight times less than in the United States, with no social security, without a right to a pension,even though for 16 years she sent home to Mexico between 200 and 300 dollars a fortnight , as remittances to help support her family.

“Those resources that we sent to Mexico are lost because we do not have access to health or housing or to a retirement program, not even to credit. Immigration laws are terribly unjust and abusive of labour rights,” she maintains.

The U.S. government has two ways to expel undocumented immigrants: through “returns”, which are immediate removals when migrants are detained crossing the border; and “removals”, which require a judicial order of deportation and generate criminal records.

In those cases, the ban on returning to the United States ranges from 10 to 50 years.

The mass deportation of undocumented immigrants intensified during the Democratic administration of Barack Obama (2009-2017). Between 2009 and 2016, 5.2 million people were deported from the country, 65 percent of whom were Mexican, according to data from the U.S. Department of Homeland Security.

In those same years, the “removals” surpassed the “returns”.

Since the January inauguration of Republican President Donald Trump, with his anti-immigrant rhetoric, especially focused on Mexicans, the crisis has gotten worse.

Although total deportations so far have not increased in relation with those of his predecessor, the number of detentions within the United States has.

Trump revived Section 287 (g) of the Immigration Act, after it was suspended by Obama, which empowers local and state police to enforce immigration law and to detain and deport undocumented immigrants.

“This has driven up detentions…with the help of local and state police who have been trained as immigration agents,” said activist Luis Angel Gallegos, who works with deported migrants in the Popular Assembly of Migrant Families, an organisation that promotes reunions between separated families. 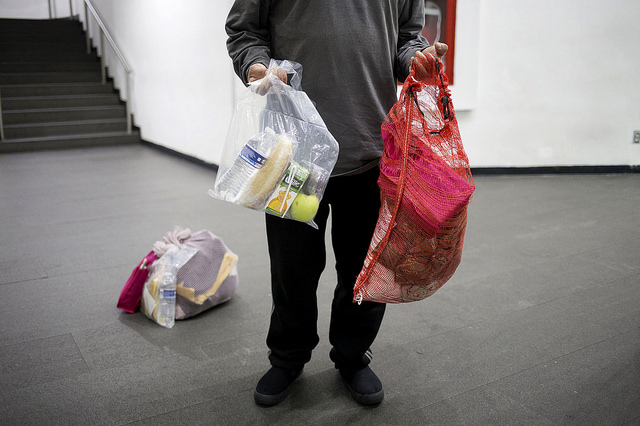 A kit with toiletries, a sandwich, a beverage and fruit received from the Mexican authorities by a deportee who just arrived to the Mexico City airport on a plane from the United States. Credit: Julia Sclafani / IPS

Most of the deported Mexicans are no longer considered productive because of their age, English is not their main language, their educational level is low, they work in the services sector, and their family (spouse and children) are in the United States.

The challenges posed by the deportations, Gallegos told IPS, have to do with their access to rights such as identification documents, employment, education, housing, health services and their reintegration into the country’s public life.

“This country continues implementing a policy of reception through the We Are Mexicans strategy and the Repatriation to the Interior of Mexico Programme (PRIM) rather than through an integration policy,” lamented the activist who considers these two instruments of the National Institute of Migration (INM) insufficient to address the problems faced by the deportees.

Support from the IOM

Cristopher Gascón, the representative of the International Organisation for Migration (IOM) office in Mexico, agrees with the analysis of the challenges, although he is much more optimistic about the government programmes.

In fact, the IOM supports the We Are Mexicans programme and collaborates with the INM to “establish a not so formal environment, from a more neutral organisation” for the reception of migrants.

However, he explained, the deportees “are such a large group that the sheer numbers exceed the capacity of the country.”

“The policies of the United States now make it much more difficult to return, which means a lot of people are going to have to stay in Mexico, and that is a problem we are recognising: how the person is reintegrated into the labour market and the social fabric: these links have to be restored. These are immense challenges for society and institutions,” he said.

From the perspective of the IOM, the Mexican government should increase its budget and staff, as well as its capacity to address the needs of deportees and the impact on the Mexican population.

“The Consultative Council (of the INM) is a good place to begin to coordinate the organisations, but it has to be done in a more systematic way because the pressure is going to increase,” Gascon said.

Added to this phenomenon is the growing number of Central Americans, South Americans and migrants from other regions who are increasingly staying in Mexico, and decide not to continue on their way to the United States, and for whom there is no policy of reception and integration.

“This could be a major problem,” said the IOM representative.

Currently, 600 people on average are returning to Mexico every day.

In Mexico City, three planes carrying migrant deportees land every week, arriving in a country that they often do not recognise anymore.

At the airport they receive a plastic bag with a sandwich, juice, fruit, toothpaste, a small bottle of shampoo and a bar of soap – a welcome package from the Mexican government.

Every Tuesday the group Deportees United in the Struggle, which was formed in January, is there to welcome them. In May, the group opened a screen-printing workshop in Mexico City to generate jobs for deportees and provide a place to receive and accommodate migrants. The group helps them contact family members and get information on paperwork such as unemployment insurance.

López, a member of that group, believes that the government programmes are not intended for workers returning after a long time away, nor to assist families that have been split up, such as in getting stable housing or in mechanisms for applying for passports for children who have been separated from their parents.

Something as simple as changing dollars for pesos is almost impossible if they do not have identity documents or if the only one they have is the deportation sheet. “If they are denied the most basic right, to an identity, because it seems that we lose our identity when we leave, all of their rights are denied,” she argued.