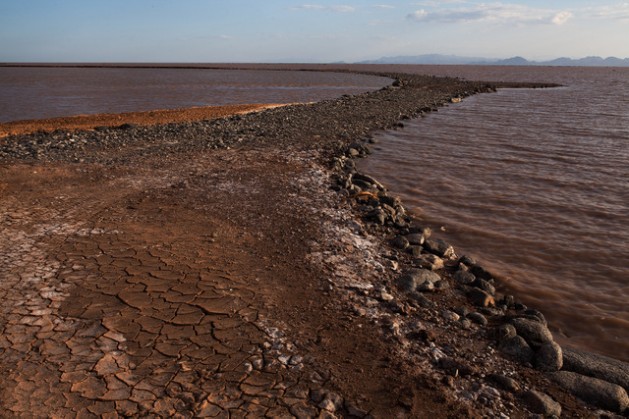 The Zanjón, the nucleus of the Alto Golfo de California y Delta del Río Colorado Biosphere Reserve in northwest Mexico, where the Cocopah have fished for a living for centuries. The restrictions on fishing condemn them to extinction. Credit: Courtesy of Prometeo Lucero

EL MAYOR, Mexico , Sep 8 2014 (IPS) - In their language, Cocopah means “river people”. For over 500 years the members of this Amerindian group have lived along the lower Colorado River and delta in the Mexican states of Baja California and Sonora and the U.S. state of Arizona.

They fish and make crafts for a living, have strong family ties, and are united by their Kurikuri or rituals and funeral ceremonies – and, now, by the struggle to keep from disappearing, in a battle led by their women. Today, the Cocopah number just over 1,300 people, most of whom live in Arizona.

“I’m Hilda Hurtado Valenzuela. I’m a fisherwoman. And I am Cocopah,” says the president of the Cocopah Indigenous People Cooperative Society.

She and other women of this community introduce themselves this way at an assembly attended by IPS, held to discuss the federal government’s promise to finally consult them about a fishing ban which took away their livelihood and practically condemns them to extinction.

“The case of the Cocopah is an example of how ultra-conservationist policies can endanger the existence of a native community.” -- Lawyer Yacotzin Bravo

“No government has the right to take our habitat from us,” Hurtado told IPS during a visit to the El Mayor Cocopah Indigenous Community, where the Red de Periodistas de a Pie (Journalists on Foot Network) and the Mexican Commission for the Defence and Promotion of Human Rights are carrying out a project for the protection of human rights defenders, financed by the European Union.

In May, the 61-year-old Hurtado, a mother of four and grandmother of 10, sat down on the road connecting the port of San Felipe on the Gulf of California with Mexicali, the capital of the state of Baja California, which abuts the U.S., and refused to budge until the federal government formalised its promise to hold a consultation with the local communities.

“The government agreed to do something that it should have done 25 years ago,” said the lawyer Ricardo Rivera de la Torre of the Citizens Commission of Human Rights of the Northwest, an organisation that has been documenting violations of civil rights in Baja California since 2004.

Rivera de la Torre and Raúl Ramírez Baena took the case to the Inter-American Commission on Human Rights in 2008.

“The government violated the Cocopah’s people’s right to consultation as outlined in the International Labour Organisation’s Convention 169,” which Mexico ratified in 1990, said Ramírez Baena.

ILO Convention 169 Concerning Indigenous and Tribal Peoples requires prior consultation of local indigenous communities before any project is authorised on their land.

But in 1993, without any prior consultation, the government decreed the creation of the Alto Golfo de California y Delta del Río Colorado Biosphere Reserve. The nucleus of the reserve is the Zanjón, where the Cocopah have fished for the Gulf weakfish (Cynoscion othonopterus) for centuries.

The Gulf weakfish lay their eggs between February and May in shallow waters in the Gulf of California where the states of Sonora and Baja California meet, and the fish are widely sold during Lent, when Catholics abstain from eating meat on Fridays.

After the biosphere reserve was created, a Reserve Management Plan was adopted in 1995, along with a string of laws and regulations – such as the Law on Ecological Balance and a fishing quota and ban – which restricted the fishing activities of the Cocopah to levels that have made it impossible for them to make a living.

“The case of the Cocopah is an example of how ultra-conservationist policies can endanger the existence of a native community,” said Yacotzin Bravo, another lawyer with the Citizens Commission of Human Rights of the Northwest. 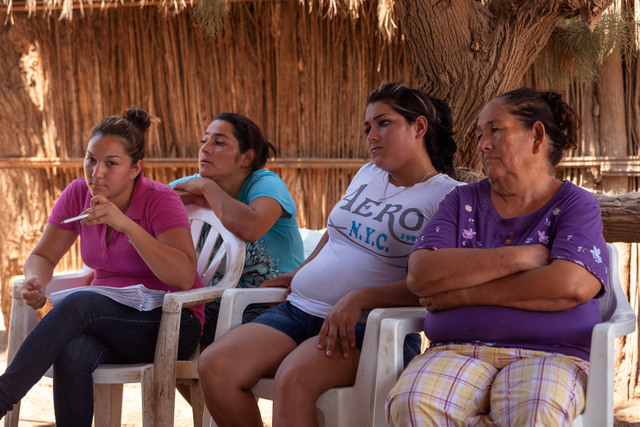 A group of Cocopah women in the Indiviso ejido, in the El Mayor Cocopah Indigenous Community in the Mexican state of Baja California, during an assembly where they discussed how to carry out a consultation on reforming the regulations and laws that limit their fishing in the biosphere reserve. Credit: Courtesy of Prometeo Lucero

The Mexican constitution defines indigenous people as the descendants of the populations that inhabited the area before the state was formed and who preserve their ancestral cultural or economic institutions.

Article 2 of the constitution establishes that native people have “preferential access” to the nation’s natural assets.

“Indigenous rights are the rights of peoples,” expert in indigenous law Francisco López Bárcenas told IPS. “Not of persons, not of municipalities, not of rural communities. With respect to indigenous rights, we are talking about the appropriation of territory, which is necessary for a people to be able to exist as such.

“They depend for a living on fishing, on a close relationship with their natural surroundings. It’s not only about money. First, as a result of the laws on agriculture, their territories were shrunk to small spaces, and now their main livelihood activity is reduced. And if they can’t fish, they have to go to other parts to find work,” he said.

Every year, just after the waning moon, the weakfish begin their migration to the shallow waters of the Colorado River delta, and fishing season starts.

The Cocopah go to sea in their “pangas” or fishing boats and sit quietly until they hear the weakfish and throw their “chinchorros” or nets. The Cocopah capture between 200 and 500 tons of fish per season.

“What the government has done with us is segregation,” Juana Aguilar González, the president of the El Mayor Cocopah Rural Production Society, told Tierramérica. “They know that we Indians don’t threaten the environment.”

The Cocopah are not the only ones who catch weakfish. There are also two non-indigenous cooperatives in the area – San Felipe in Baja California and Santa Clara in Sonora – with a fishing capacity 10 times greater, according to statistics from the governmental National Commission for Knowledge and Use of Biodiversity (CONABIO).

The weakfish “captured by the Cocopah are approximately 10 percent of the recommended quota, which shows that the fishing done by that indigenous community, even if they fish in the nucleus of the reserve, does not hurt the ecological balance or threaten the species with extinction,” says recommendation 8/2002 of the National Human Rights Commission addressed to the ministries of the environment and agriculture.

“The decree creating the reserve changed our lives,” Mónica González, the daughter of the late Cocopah governor Onésimo González, said sadly. “Now, instead of being busy organising our dances, we have to be worried about the legal action, the trials, confiscations and arrests.”

The Cocopah, descendants of the Yumano people, are one of the five surviving indigenous groups in Baja California.

In the 17th century, some 22,000 Cocopah were living in the Colorado River delta. Today there are only 1,000 in the Cocopah Indian Reservation in the southwest corner of Arizona, and just over 300 in Mexico, in Baja California and Sonora, according to the governmental National Commission for the Development of Indigenous Peoples.

According to the United Nations Educational, Scientific and Cultural Organisation (UNESCO) , Cocopah is an endangered language. There are only 10 Cocopah speakers still alive. Years ago one of them, 44-year- old Mónica González, began to make an effort to revive the language.

“Sometimes I think our leaders talk about the Cocopah as if we had already died, but we are alive and still putting up a struggle,” she told IPS.