This article is part of IPS coverage of the International Day of the Victims of Enforced Disappearances, celebrated Aug. 30 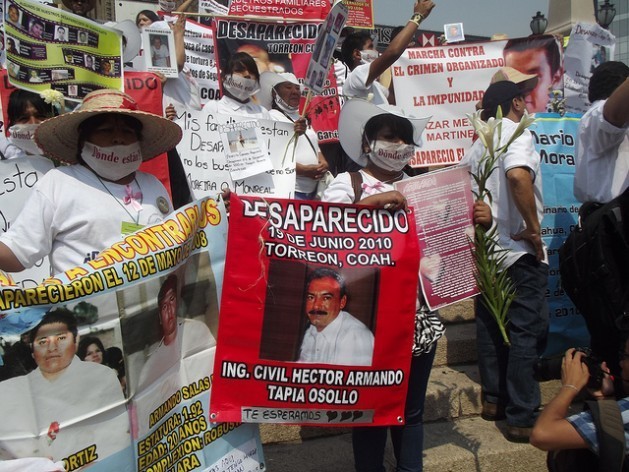 One of numerous protests by relatives of victims of forced disappearance, who come to Mexico City to demand that the government search for their relatives and solve the cases. Credit: Diana Cariboni/IPS

MEXICO CITY, Aug 26 2016 (IPS) - “Go and tell my dad that they’re holding me here,” Maximiliano Gordillo Martínez told his travelling companion on May 7 at the migration station in Chablé, in the southern Mexican state of Tabasco. It was the last time he was ever seen, and his parents have had no news of him since.

Gordillo, 19, and his friend had left their village in the southern state of Chiapas to look for work in the tourist city of Playa del Carmen, in the southeastern state of Quintana Roo. It was a 1,000-km journey by road from their indigenous community in the second-poorest state in the country.

But halfway there, they were stopped by National Migration Institute agents, who detained Maximiliano because they thought he was Guatemalan, even though the young man, who belongs to the Tzeltal indigenous people, handed them his identification which showed he is a Mexican citizen.

“One single forced or politically motivated disappearance in any country should throw into doubt whether a state of law effectively exists. It’s impossible to talk about democracy if there are victims of forced disappearance.” -- Héctor Cerezo

When his friend tried to intervene, he was threatened by the agents, who said they would accuse him of being a trafficker of migrants. The young man, whose name was not made public, was terrified and fled. When he reached his village he told Arturo Gordillo, Maximiliano’s father, what had happened.

It’s been over three months and the parents of Max, as his family calls him, have not stopped looking for him. On Monday, Aug. 22 they came to Mexico City, with the support of human rights organisations, to report the forced disappearance of the eldest of their five children.

He had never before been so far from Tzinil, a Tzeltal community in the municipality of Socoltenango where four out of 10 local inhabitants live in extreme poverty while the other six are merely poor, according to official figures.

“The disappearance of my son has been very hard for us,” Arturo Gordillo, the father, told IPS in halting English. “I have to report it because it’s too painful and I don’t want it to happen to another parent, to be humiliated and hurt this way by the government.”

“The Institute ignores people, their heart is hard,” he said, referring to Mexico’s migration authorities. At his side, his wife Antonia Martínez wept.

The case of Maximiliano Gordillo is just one of 150 people from Chiapas who have gone missing along routes used by migrants in Mexico, the spokesman for the organisation Mesoamerican Voices, Enrique Vidal, told IPS.

They are added to thousands of Central American migrants who have vanished in Mexico in the past decade. According to organisations working on behalf of migrants, many of the victims were handed over by the police and other government agents to criminal groups to be extorted or used as slave labour. 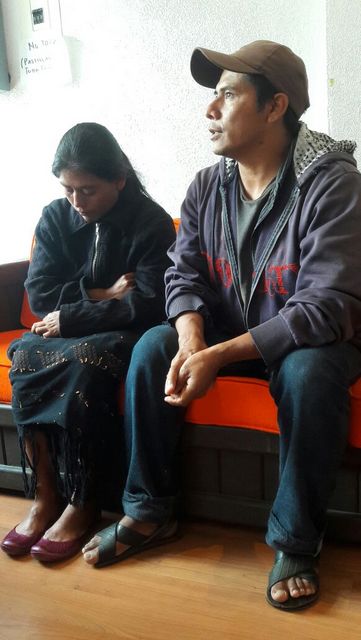 Antonia Martínez, devastated by the forced disappearance of her son, Maximiliano Gordillo, 19, while his uncle Natalio Gordillo went over details of the case with IPS. His parents and other relatives came to Mexico City from the faraway village of Tzinil, of the Tzeltal indigenous community, to ask the government to give back the young man, who they have heard nothing about since May 7. Credit: Daniela Pastrana/IPS

The only official data available giving a glimpse of the extent of the problem is a report by the National Human Rights Commission, which documented 21,000 kidnappings of migrants in 2011 alone.

But the problem does not only affect migrants. In Mexico, forced disappearances are “widespread and systematic,” according to the report Undeniable Atrocities: Confronting Crimes against Humanity in Mexico, released by the international Open Society Justice Initiative and five independent Mexican human rights organisations.

The study documents serious human rights violations committed in Mexico from 2006 to 2015 and says they must be considered crimes against humanity, due to their systematic and widespread nature against the civilian population.

The disappearances are perpetrated by military, federal and state authorities – a practice that is hard to understand in a democracy, local and international human rights activists say.

“One single forced or politically motivated disappearance in any country should throw into doubt whether a state of law effectively exists. It’s impossible to talk about democracy if there are victims of forced disappearance,” said Héctor Cerezo of the Cerezo Committee.

The Cerezo Committee is the leading Mexican organisation in the documentation of politically motivated or other forced disappearances.

On Wednesday, Aug. 24 it presented its report “Defending human rights in Mexico: the normalisation of political repression”, which documents 11 cases of forced disappearance of human rights defenders between June 2015 and May 2016.

Cerezo told IPS that in Mexico, forced disappearance “evolved from a mechanism of political repression to a state policy aimed at generating terror.”

The Inter-American Commission on Human Rights (IACHR) urged Mexico in March to acknowledge the gravity of the human rights crisis it is facing. 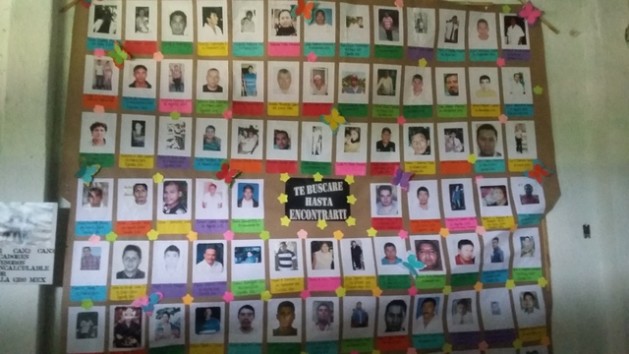 Signs with the images of victims of forced disappearance are becoming a common sight in Mexico, like this one in a church in Iguala in the southwestern state of Guerrero. Credit: Daniela Pastrana/IPS

The report presented by the IACHR after its visit to Mexico in 2015 denounced “alarming” numbers of involuntary and enforced disappearances, with involvement by state agents, as well as high rates of extrajudicial executions, torture, citizen insecurity, lack of access to justice, and impunity.

The Mexican government has repeatedly rejected criticism by international organisations. But its denial of the magnitude of the problem has had few repercussions.

The activists who spoke to IPS stressed that on Aug. 30, the International Day of the Victims of Enforced Disappearances, the international community has an opportunity to draw attention to the crisis in Mexico and to hold the government accountable for systematically disappearing members of certain groups of civilians, as documented by human rights groups.

But not everything is bad news with respect to the phenomenon of forced disappearance, which runs counter to democracy in this Latin American country of 122 million people which is free of internal armed conflict.

This year, relatives of the disappeared won two important legal battles. One of them is a mandate for the army to open up its installations for the search for two members of the Revolutionary Popular Army who went missing in the southern state of Oaxaca, although the sentence has not been enforced.

Meanwhile, no progress has been made towards passing a draft law on forced disappearance under debate in Congress.

“The last draft does not live up to international standards on forced disappearance nor to the needs of the victims’ families, who do not have the resources to effectively take legal action with regard to the disappearance of their loved ones. There is no real access to justice or reparations, and there are no guarantees of it not being repeated,” said Cerezo.

In the most recent case made public, that of Maximiliano Gordillo, the federal government special prosecutor’s office for the search for disappeared persons has refused to ask its office in Tabasco to investigate.

For its part, the National Human Rights Commission issued precautionary measures, but has avoided releasing a more compelling recommendation. The National Migration Institute, for its part, denies that it detained the young man, but refuses to hand over the list of agents, video footage and registries of entries and exists from the migration station where he was last seen.

Aug. 22 was Gordillo’s 19th birthday. “We feel so sad he’s not with us. We had a very sad birthday, a birthday filled with pain,” said his father, before announcing that starting on Thursday, Aug. 25 signs would be put up in more than 60 municipalities of Chiapas, to help in the search for him.

As the days go by without any progress in the investigations, Gordillo goes from organisation to organisation, with one request: “If you, sisters and brothers, can talk to the government, ask them to give back our son, because they have him, they took him.”