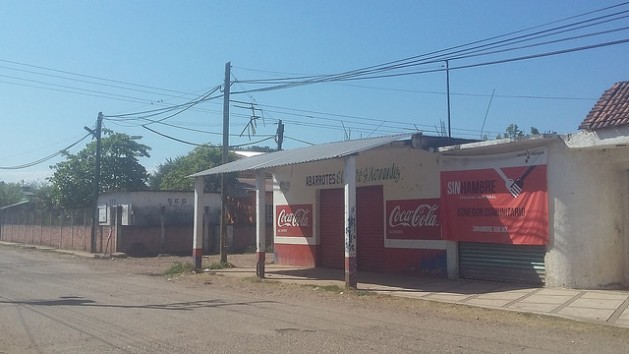 One of the empty streets in the town of Santa Ana del Águila, in the Mexican municipality of Ajuchitlán del Progreso, where there is almost no one left and homes and businesses are shuttered and many have bullet marks. Credit: Daniela Pastrana/IPS

AJUCHITLÁN, Mexico, Feb 7 2015 (IPS) - Cerro del Águila, which two centuries ago was a refuge for independence fighters in Mexico, is now a stronghold of organised crime groups engaged in turf wars for control of the prosperous poppy trade and trafficking routes, which have left a string of ghost towns in their wake.

From Águila mountain – “cerro” means hill in Spanish – it’s possible to see who is coming and going from a number of villages down below in this region known as Tierra Caliente, which is in the Balsas river basin in the impoverished southern state of Guerrero, and in neighbouring municipalities in the states of Michoacán and México.

These states are hotbeds of organised crime and drug trafficking, and made the headlines in 2014: Michoacán, as the state that armed paramilitary forces known as “self-defence” groups; México, where the army killed at least 15 civilians; and Guerrero, where municipal police ambushed and forcibly disappeared 43 students from a rural teachers college.

In Santa Ana del Águila, a town of 748 people at the foot of the hill which belongs to the municipality of Ajuchitlán del Progreso, over half of the population has fled in the last few weeks. There is no longer a sheriff, a priest, or anyone to run the shop where people buy food at subsidised prices as part of the government’s National Crusade Against Hunger anti-poverty programme.

The windows of the houses are closed and barred and local businesses are shuttered. The doors to the health clinic and schools have chains and padlocks. Only the middle school dared open after the year-end vacations, but at a high cost: on Jan. 12, the second day of classes, the teacher was kidnapped, and his family has not been able to scrape up the ransom money yet.

“I’m not afraid to die, but the way these people are going to die makes me sad,” one local resident who is still here told IPS.

Ajuchitlán del Progreso and the adjacent San Miguel Totolapan are the municipalities that have been hit by the highest levels of violence in Guerrero. Several organised crime groups, including the notoriously violent La Familia Michoacana and Guerreros Unidos drug cartels, are fighting for control of this region, which is key for the trafficking of poppies, used to produce heroin.

In an interview with IPS, the mayor of Ajuchitlán, José Carmen Higuera, said that since 2007, the most frequent crimes in the municipality are kidnapping and extortion.

“What happened here is the usual: the town fills up with police and the army, but nothing happens, no major arrests are made. I have said it before: we don’t want them here, in the municipal seat; they should go out and protect the villages and communities, where they are really needed.” -- Mayor José Carmen Higuera

“I try to do the best I can, but we need a more efficient and operative strategy, with real intelligence work,” said the mayor, who does not have bodyguards even though two of his predecessors, Raymundo Flores and Esteban Vergara, have been missing since 2013.

As in many similar cases of missing local officials and priests, no investigation has been carried out.

The federal authorities “do a lot of pretending,” Higuera said. “What happened here is the usual: the town fills up with police and the army, but nothing happens, no major arrests are made. I have said it before: we don’t want them here, in the municipal seat; they should go out and protect the villages and communities, where they are really needed.”

The municipality includes the main town of the same name and 127 villages spread over nearly 2,000 sq km, with a total population that before the forced displacement stood at nearly 140,000.

Heroin for the United States

Mexico produces nearly half of the heroin consumed in the United States, and in recent years has become the main supplier of illegal opium derivatives in that country, according to the U.S. Drug Enforcement Administration’s (DEA) 2014 National Drug Threat Assessment.

In the annual report on the major drug transit or producing countries that President Barack Obama sent to Congress in September, the DEA reported a 324 percent increase in heroin seizures at the Mexican border between 2009 and 2013.

“The United States is particularly concerned about poppy cultivation in Mexico, the primary supplier of illegal opium derivatives to the United States,” Obama said in the presidential memorandum.

The poppy-producing areas in Mexico are in the Pacific coastal states, from Oaxaca in the south to Sinaloa in the north, and in mountainous areas in the neighbouring Chihuahua.

Guerrero, one of the country’s three poorest states, has been the leading producer over the last three decades. Some experts estimate that the state accounts for 40 percent of the opiates produced in Mexico.

Control of Tierra Caliente, which has two ports, is key. And because of that, Santa Ana del Águila and other communities in Ajuchitlán and Totolapan have become ghost towns, as more and more people flee the violence.

The last wave of armed clashes began shortly after Christmas, local residents of Santa Ana and the nearby village of Garzas told IPS.

But the problem is not new. Massive forced displacements in this area began in July 2013, when battles between organised crime groups forced 631 people to flee Villa Hidalgo, a village in Totolapan.

The National Human Rights Commission, an independent government agency, launched an investigation, and in its special report on self-defence groups and rising crime and violence in Guerrero, presented in December, it documented 2,393 cases of forced displacement from mid-2013 to mid-2014.

The second wave occurred from March to July 2014. In March, 136 people from the town of Linda Vista, which is also in Totolapan, hiked through the mountains for nearly 24 hours without food, to reach another town before heading to Chipalcingo, the capital of Guerrero, where they sought shelter and were housed in centres used to evacuate people during heavy rains and flooding.

Local press reports estimate the number of people displaced by the violence in the area at 4,000 from mid-2013 to mid-2014. But a national lawmaker puts the total at over 7,000. None of these figures have been verified.

In January, after the kidnapping of seven people, the commander of the military zone 35, Juan Manuel Rico, officially confirmed that a camp would be set up in the county seat in Ajuchitlán, to protect the local communities, which over 1,000 people have fled in the last few weeks.

But the federal forces – military and police – rarely leave the main town and can be seen walking around the central square, while every day people comment about new murders, homes burnt down, and armed clashes in communities just 20 minutes away.

“They do a lot of pretending. They don’t even inform us about what they’re doing,” said Mayor Higuera, complaining that the military and police forces don’t patrol the communities and villages, where the violent clashes take place. To sum up the lack of support he feels in his fight against organised crime, he said “better alone than in bad company.”