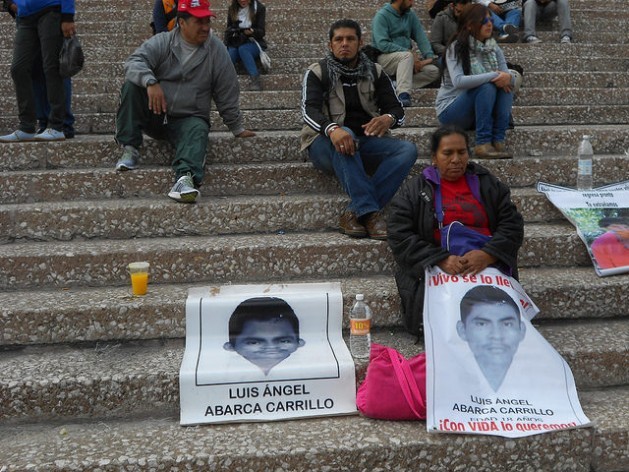 Metodia Carrillo, a member of the Nahuatl indigenous community, holds a sign with the picture of her son Luís Ángel Abarca, one of the 43 students who went missing Sep. 26 in Iguala, as she rests on the bleachers of the National Stadium during a protest by the students’ families in the Mexican capital, four months after they were kidnapped. Credit: Emilio Godoy/IPS

MEXICO CITY, Jan 29 2015 (IPS) - The mother tongue of Celso García, a 51-year-old indigenous Mexican, is Mixteca. As a boy, García, the father of one of the 43 students forcibly disappeared four months ago, had to learn Spanish to make his way in mainstream society in this country where most people are of mixed-race heritage.

García, a father of four, has a small farm where he grows corn, beans, pumpkins and hibiscus flowers near the town of Tecuantepec, some 380 km south of Mexico City, in the state of Guerrero.

But his crops have been abandoned since the night of Sep. 26, when his 21-year-old son Abel, a first-year student at the Escuela Normal Rural de Ayotzinapa rural teachers college, was disappeared along with 42 of his classmates at the hands of municipal police and gunmen from the organised crime group “Guerreros Unidos”, according to the investigation by the national authorities and the testimony of suspects who have confessed their involvement.

“He wanted to be a teacher to help his family. The students aren’t criminals or ‘narcos’, for them to do this to them. That’s why we feel so much anger and pain.” -- Metodia Carrillo, the mother of missing student Luis Ángel Abarca

“We want our kids to appear,” said García, wearing a long checked shirt, baggy pants that fluttered in the wind, and sandals that hardly protected his feet, calloused from trudging along dirt paths. “That way we can stop losing time; we’re not able to work now,” he told IPS.

The night of Sep. 26 local police from Iguala, a town 191 km south of the capital, opened fire on students from the Ayotzinapa rural teachers college as they were driving to Mexico City in buses. Six students were killed and 25 were wounded.

The police then took away 43 of the students and handed them over to members of Guerreros Unidos, one of the most violent drug trafficking gangs in the area, according to the investigation by the attorney general’s office.

The investigation found that the 43 students were killed that night and their bodies were burnt using a flammable substance in a garbage dump outside Colula, a town near Iguala, and the ashes and any other remains were dumped in a nearby river.
Four months after the alleged massacre, attorney general Jesús Murillo said that was the “truth” about what happened, which was reconstructed on video with the cooperation of suspects arrested in the case. He added, however, that the investigation was still open.

But the parents of the victims, some of whom talked to IPS, are not convinced that all of the students are dead. 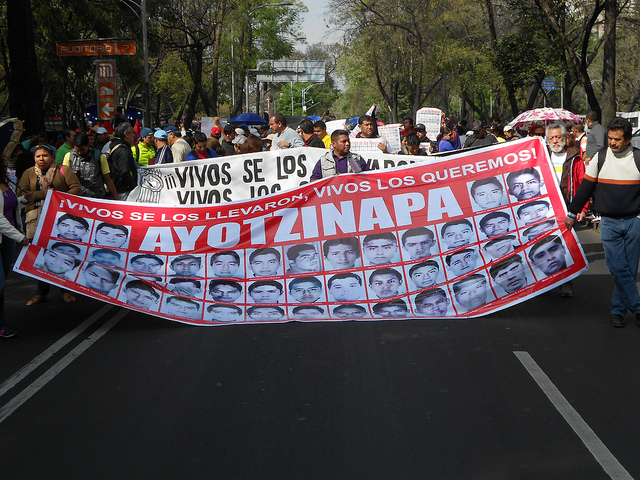 “They were taken away alive; we want them back alive.” Protesters and family members of the 43 missing students demonstrating on the Paseo de la Reforma avenue in the Mexican capital on Jan. 26, four months after they were killed, according to the official investigation. Credit: Emilio Godoy/IPS

The remains of only one student were identified using DNA samples, the attorney general’s office reported on Jan. 7.

Forensic experts from the University of Innsbruck in Austria, who carried out the tests, said it was impossible to obtain DNA samples from the rest of the remains due to the “excessive heat” to which the bodies were subjected.

The missing students and their families who are searching for them tirelessly are poor peasant farmers, most of whom are indigenous.

That is the description, in fact, of the students of the colleges that train the schoolteachers who work in Mexico’s poor rural villages with the aim of helping their communities combat the poverty, hunger, marginalisation and discrimination faced by the country’s indigenous people, who officially number 12 million in a total population of 122 million.

The Mexican census identifies people as indigenous if they preserve their native languages, traditions, beliefs and cultures. There are 54 indigenous peoples in Mexico. The great majority of the population identifies as “mestizo” or mixed-race.

At least half of the 43 missing “normalistas”, as rural teachers college students are known in Mexico, belong to the Me’phaa, Nahuatl or Mixteco indigenous peoples. And when an indigenous person dies, a language, culture and hope die out a little more, the victims’ families and experts point out.

For thousands of young people like the missing “normalistas”, the only possibility for continuing their education is offered by the colleges that train the schoolteachers who are posted in poor rural communities.

Like most of the parents of the missing students, Metodia Carrillo, 54, is indigenous. Her native language is Nahuatl and she lives in the village of San Antonio in the state of Guerrero.

She is the mother of 18-year-old Luis Ángel Abarca, another first-year student. Until Sep. 26, her life was dedicated to her home, her family, and growing corn, Mexico’s staple crop.

“He wanted to be a teacher to help his family,” said Carrillo. “The students aren’t criminals or ‘narcos’, for them to do this to them. That’s why we feel so much anger and pain,” added the mother of nine, whose youngest was Luis Ángel.

The southern states of Guerrero, Oaxaca and Chiapas have the largest indigenous populations and are among the poorest states. In Guerrero the native population officially numbers around 600,000 people from the Amuzgo, Mixteco, Nahuatl and Me’phaa communities.

“There has always been discrimination, in education, for example,” Melitón Ortega, the father of another missing student, 17-year-old Mauricio, told IPS. “And there is no justice. Our rights have been violated,” said Ortega, who insisted that his son be referred to in the present tense.

The father of six, who grows corn and coffee, said racism in Mexico is reflected in the high unemployment rate in indigenous communities and the lack of affordable, decent housing and adequate public services.

The government’s National Programme for Equality and Non-Discrimination 2014-2018 (PRONAIND) reports that 76 percent of the country’s indigenous population lives in poverty, and has “historically suffered from discrimination.”

In Mexico, indigenous people, the small black minority, and the rural population are poorer and less educated, and have lower incomes, less social protection and limited access to justice and participation in politics, according to PRONAIND.

“There are clear signs of discrimination,” activist Maurilio Santiago, head of the Centre for Human Rights and Legal Advice for Indigenous Peoples (CEDHAPI), based in the state of Oaxaca, told IPS. “Indigenous people are seen as third-class citizens. There is no equality in education and access to justice.”

Discrimination and poverty among the country’s native peoples persist even though the state budget assigned to that segment of the population has risen steadily since 2002, to over 4.7 billion dollars this year.

The parents of the missing students are reluctant to talk about racism, although they admit that they have experienced it.

“I’ve felt it, of course I have,” Celso García said shortly, holding up a sign reading: “Abel: we still hope you are alive. And we won’t rest until we find you. Come back soon. We miss you.”

“If they give us back our sons, we will be appeased. But we will fight until we find them,” said Carrillo after the attorney general made his statement.

Ortega wants the communities themselves to manage the budget funds. “There is rhetoric, but it doesn’t translate into facts. There are budget funds, but the problem is corruption and influence peddling. That stands in the way of works and projects being carried out,” he said.

But PRONAIND predicts a reduction in indigenous peoples’ lack of access to health services, from 24 percent in 2012 to five percent in 2018.