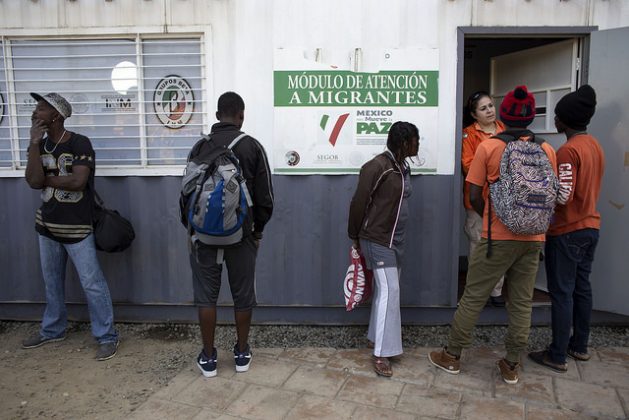 Haitian migrants seek information at the governmental National Migration Institute of Mexico, located next to the Chaparral port of entry, a busy Mexico-U.S. border crossing in the northwestern city of Tijuana. Credit: Guillermo Arias / IPS

MEXICALI, Mexico, Apr 30 2018 (IPS) - In the airport of this Mexican city, on the border with the United States, customs agents warn that they will carry out a “random” inspection. But it’s not so random. The only people who are stopped and checked have dark skin and kinky hair, and virtually do not speak a word of Spanish.

The same thing is true at other border checkpoints in Mexicali, capital of the state of Baja California, where people who “look like Haitians” are asked for their documents and have their luggage checked. The practice has become so common that no one protests, as IPS was able to ascertain on the spot.

Black people are now much more commonly seen in this region in northwest Mexico, traditionally characterised by the coexistence of large groups of migrants.

Mexicali is the best example: in 1920 it had more inhabitants of Chinese origin – who came to work in the construction of the railway – than Mexicans, and even now, the typical food of the city is Chinese.

More than 4,000 Haitians, according to the most recent data, have settled in Baja California, especially in the cities of Tijuana, the economic hub of the state; Mexicali, its political capital; and Ensenada, its tourist centre.

They began to arrive at the border here in 2016. Social organisations that provide assistance to migrants estimate that about 20,000 Haitians had come to the area with the aim of crossing the border into the U.S. to benefit from temporary protected status (TPS) before it was revoked.

The U.S. granted Haiti TPS after the 2010 earthquake. But the administration of Donald Trump has announced it will end the designation, and 59,000 Haitians will be expected to leave the country by July 2019 or face deportation. 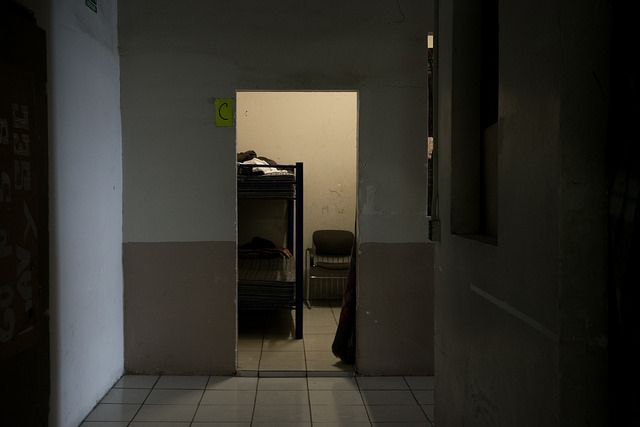 A room in the Hotel del Migrante, the best known hostel to welcome migrants in Mexicali, capital of the northwest Mexican state of Baja California, next to the Caxelico border crossing into the United States. It has been one of the shelters serving Haitians since 2016. Credit: Ximena Natera / IPS

TPS provides temporary work permits to illegal immigrants who are deemed unable to return to their countries due to natural disasters or war.

In the wake of the devastation caused by Hurricane Matthew in 2016, many more Haitians began to migrate to the United States, using Mexico as a country of transit.

They were joined by others who had left their country after the 2010 earthquake, heading to Brazil and other South American nations, which they left when the impact of economic and other crises in those countries made it more difficult for them to find work.

They did not foresee the tightening of U.S. immigration policies towards the end of the Barack Obama administration (2009-2017), and with Trump’s arrival to the White House.

Thousands are now stranded in Mexico, unable to cross the border into the United States. 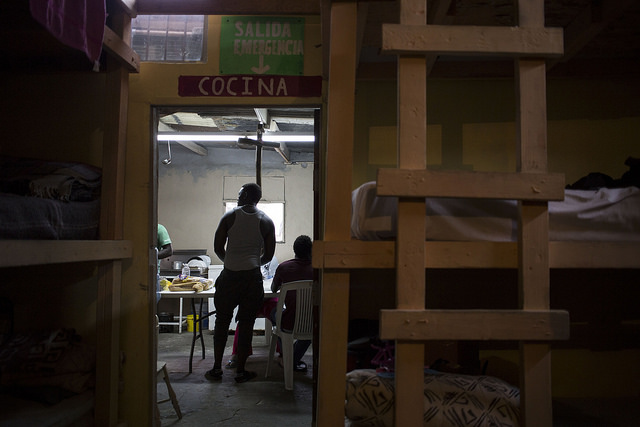 View of the kitchen from an area with bunk beds where migrants can rest, at the Padre Chava Breakfast Bar, a shelter run by the Catholic Salesian Order, located next to the U.S. border. It is one of seven support centres for migrants in the city of Tijuana, in northwestern Mexico, where Haitian migrants have been sheltered since 2016. Credit: Guillermo Arias / IPS

The Haitians initially stayed in the shelters run by civil society and religious organisations in the border cities to assist deportees and Mexican and Central American migrants.

Then, after strong political pressure, they got the Mexican government to grant them a humanitarian visa that allowsem to move around the country without being detained. The visa is valid for one year and is renewable.

Later, they began to join the labour market and now they can be seen working in construction, in the maquila – assembly-for-export – factories, as cooks, shop assistants or cleaning staff in hotels, among other trades.

“About a year ago they began to settle in. Some got a room to rent and even got married. Many are working in construction, there are even several there in front, in the extension of the port of entry, but they have dispersed,” José, in charge of the Hotel del Migrante shelter, told IPS.

José, who asked for only his first name to be used and did not want his picture taken for this article, pointed out that the shelter faces the border crossing of Calexico, where a few years ago there were mobilisations against the mass deportations by the Obama administration. 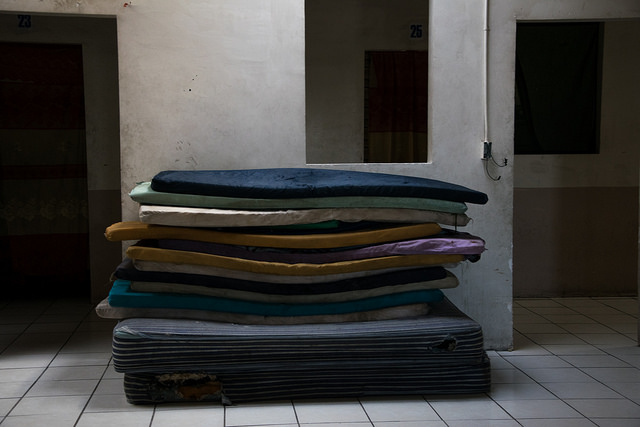 Mats and mattresses are stacked at the Hotel del Migrante, a shelter run by the organisation Angels without Borders, next to Caxelico on the U.S. border in Mexicali, capital of the northwestern Mexican state of Baja California. Credit: Ximena Natera / IPS

In the shelter, one of the largest in the city, which belongs to the civil association Angels without Borders, up to 700 Haitians were living at one time, compared to the usual average of 200 people.

“It is difficult for them because the humanitarian visa does not allow them to work, only to move freely within the country. There was an agreement with the business community of Baja California to let them work, but in reality, they are working without contracts and there is a lot of abuse going on,” said Wilner Metelus, president of the Citizen Committee in Defense of Naturalised Citizens and Afro-Mexicans.

Metelus, a naturalised Mexican citizen of Haitian origin who has lived here for years, led the process to secure humanitarian visas from the federal government. In an interview with IPS he said there has been little support from Mexican authorities for Haitians stranded in the country.

“Right now they are delaying the documents and the authorities are demanding a letter showing they have a job, but employers do not want to give it to them because they don’t want to get involved, since the visas do not allow them to work,” he cited among the problems faced by the more than 4,000 Haitians who have received humanitarian visas.

At first, 98 percent of Haitians who arrived in Mexico did so illegally, without a passport. Now, the main problem is that they do not have an Individual Registration Number (CURP), an indispensable document for practically any procedure in Mexico.

“They continue receiving humanitarian visas, but I ask myself, what good is the humanitarian visa if they cannot open a bank account and the schools do not want to receive them?” Metelus asked.

“They needpermanent residency, because they no longer want to cross the border, they want to stay here (in Mexico).”

In Tijuana, 180 km from Mexicali, things are not going better for Haitians.

In 2016, when large numbers of Haitians began to be marooned in this area, evangelical pastor Gustavo Banda opened the doors of his Ambassadors of Jesus church to house families, and donated land about 10 km southwest of the city, so that 30 of them could build small homes. 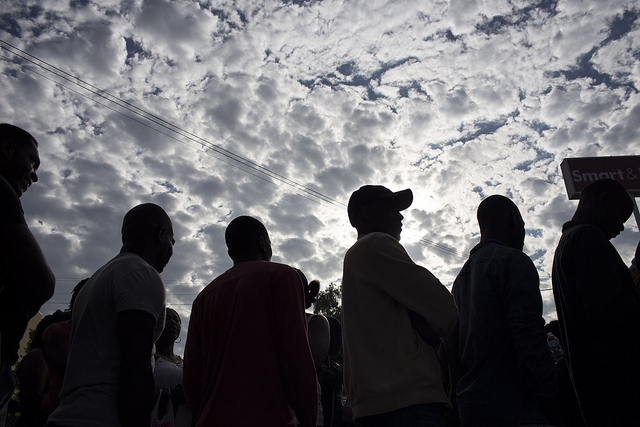 Haitians await news about their immigration status in the border city of Tijuana, in the northwest of Mexico, one of the points of the country where Haitians have settled after they were frustrated in their attempt to enter the United States. Mexico has granted a humanitarian visa to over 4,000 Haitians since 2017. Credit: Guillermo Arias / IPS

The community named the area as “Little Haiti,” in reference to the neighbourhood of the same name in the U.S. city of Miami, Florida.

Construction began with donations from the community, but in July 2017, an order from the Department of Civil Protection of Tijuana put a halt to the building, warning that it was an area in danger of flooding.

“This is an act of racism,” Banda complained at the time.

Haitians have been victims of incidents of xenophobia and racism. On Jan. 28, two Haitian citizens were shot in the northern part of the city.

The Mexican weekly ZETA reported that one of the wounded men lived in the shelter in front of where the attack occurred and the other was visiting him; they were heading out to get food for dinner when they were shot by someone riding past on a bicycle.

Tijuana is one of the most violent cities in the country, and its outlying areas are especially dangerous.

“I recognise the solidarity of many people, but I think the government could do more. They are living in highly marginalised areas and there is a lot of discrimination against Haitian migrants,” Metelus concluded.