MEXICO CITY, May 30 2011 (IPS) - “We didn’t expect support from so many people in the capital. The authorities have to answer for this, and they must understand that we will not give up until justice is done,” Manuel Rodríguez Amaya told IPS, his eyes still wet from bursting into tears at the end of the citizen’s trial. 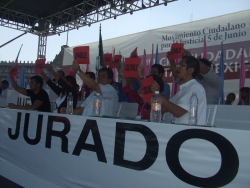 His son, Xiunelth Emmanuel, was one of the 49 children who died Jun. 5, 2009 in a fire at the public-private ABC daycare centre in the northwestern state of Sonora.

Their parents’ battle for justice led to the unprecedented citizen’s trial against the Mexican state Sunday May 29 in the Zócalo, the main square in Mexico City.

A former Mexico City ombudsman acted as judge, and a score of renowned academics, human rights defenders and distinguished members of civil society served as the jury and witnesses of honour. A prosecutor and a public defender, both researchers at the National University, together with relatives of the deceased children, took part in the exercise “based on the power of ethics.”

“The state’s crimes continue to mount. This is a citizen’s trial against impunity and corruption, against a rotten state, as (poet Javier) Sicilia calls it, against the ‘bandit state’,” said playwright Sabina Berman, one of the witnesses of honour.

Forty-nine children under four died in the fire at the ABC nursery, and another 75 were injured.

The government social security service, IMSS, outsourced childcare to the private daycare centre, a system that became widespread during the administration of former president Vicente Fox (2000-2006). The owners of the daycare centre were members of the local political and business elite and relatives of then governor Eduardo Bours (2003-2009) and of Margarita Zavala, the wife of current President Felipe Calderón.

The ABC nursery was located in an old warehouse with toxic and inflammable walls and blocked emergency exits, violating even the minimum safety standards.

But it was licenced as an IMSS services provider in 2001, and the permit was confirmed in 2006, when the Institute’s director was Juan Molinar, who is now the transportation secretary and close to President Calderón.

The centre had been warned as early as 2005 that tarpaulins and ceilings on the premises were a fire hazard and had to be replaced. But the owners failed to do so, and the warnings were not enforced. Moreover, on the day of the fire, the emergency exits were locked.

“It was an avoidable tragedy,” said journalist Katia D’Artigues, who took part in the citizen’s trial.

As a result of the social pressure in response to the impunity surrounding the tragedy, the Supreme Court carried out its own investigation.

In its preliminary report in March 2010, the Court’s investigative commission stated that the IMSS outsourcing of childcare services was illegal. The report also named 17 people for violating the rights of the children, including Molinar and former governor Bours.

In addition, the investigation found that of the 1,480 outsourcing contracts signed by the IMSS, only 14 met all the legal requirements.

In November 2010 the Court ruled that the daycare system was in a state of “generalised disorder,” with serious violations of children’s rights, but it did not identify those responsible.

The parents formed the “June 5 citizens’ movement for justice”, and on May 2 secured Senate approval of a comprehensive childcare services law (known as the “June 5 Law”). The country’s leading experts on children helped draft the legislation.

But the bill is pending approval in the lower house of Congress.

The citizen’s trial was the first of a series of activities being held this week to commemorate the tragedy, and is linked to the peace movement headed by Javier Sicilia, which has organised a motorcade to Ciudad Juárez, on the U.S. border, departing Jun. 4.

Although they were invited to the symbolic trial, no representatives of the institutions being tried – the executive branch, through the IMSS; the Attorney-General’s Office, the Supreme Court, the lower house of Congress and the National Human Rights Commission – showed up at the Zócalo.

José Francisco García, father of Andrés Alonso and legal representative of the movement, received a reply May 27 from undersecretary of government Juan Marcos Gutiérrez to the “summons” sent to President Calderón.

“Given the nature of the event, it is absolutely inappropriate for the President to attend, or for a representative to be appointed,” the reply said, although the federal government “will pay close attention to any requests from the organisation in the future.”

Seated next to five empty chairs, lawyer Daniel Márquez, who served as public defender, argued that the laws are good, and that individuals, not the state, are responsible.

The prosecutor, Mónica González, cited General Comment No. 7 (2005) by the United Nations Committee on the Rights of the Child, which discourages privatisation of childcare: “States parties are responsible for service provision for early childhood development. The role of civil society should be complementary to – not a substitute for – the role of the State.”

“The outsourcing scheme encourages privatisation. And some models are even worse, like the Social Development Secretariat scheme for daycare centres (promoted by the Calderón administration),” said the prosecutor.

The citizens’ jury found each of the accused institutions guilty, and Emilio Álvarez Icaza, acting as judge, “ordered” the Mexican state to change the childcare outsourcing scheme, allocate resources for early childhood development in accordance with the resolutions of the Committee on the Rights of the Child, and complete “as soon as possible” the trials of those charged with criminal responsibility for the fire.

As part of the reparations due for damages, the jury ruled the state must guarantee protection and treatment for the injured children, build a memorial on the premises of the burned down daycare centre, establish Jun. 5 as a national day of mourning, and approve the June 5 Law.

The directors of the IMSS during this administration, Molinar and Daniel Karam, were “sentenced” to make a public apology and perform one month’s community service for each child who died or was injured. They were also “disqualified” from holding any public office for a period of 20 years.

At the trial, which attracted scores of people to the Zócalo, 25 pink and 24 blue flags were flown in honour of the children who died, and one white one for the injured.

“The purpose of this trial is so that this kind of tragedy never happens again,” said the prosecutor, González.