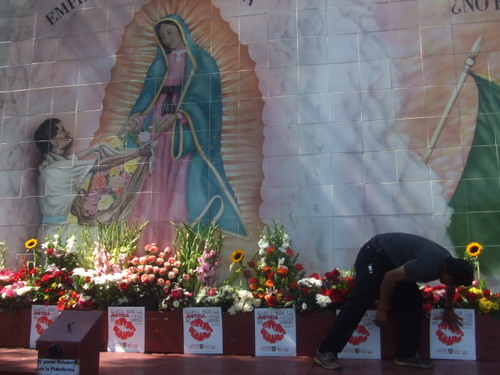 A participant in the peace caravan places an offering outside the La Placita church in Los Angeles. Credit: Daniela Pastrana/IPS

Sicilia and a group of 40 other relatives of victims of drug-related violence, along with dozens of human rights activists from Mexico and the United States, set out on Sunday in a binational Peace Caravan that will weave across the United States, eventually arriving in Washington D.C. on Sept. 10.

The slogan of the convoy, which consists of buses, campers and trailers, is “No More Drug War”. Its ambitious goal is to get the government of President Barack Obama to cooperate in cracking down on the smuggling of firearms across the U.S. border into Mexico.

But the main aim of the Movement for Peace with Justice and Dignity is to press for a change in the United States’ prohibitionist drug policy, followed by Washington since the administration of Republican president Richard Nixon (1969-1974), and replicated in Mexico.

“If we continue to leave the problem only in the hands of governments and political organisations, the only thing we will have is more violence,” Sicilia said in San Diego, California, the first stop of the caravan, which will visit 27 cities.

He also said it would lead to a greater number of states that “disguised as democratic, will become more and more police and military-oriented, and more xenophobic.”

His proposal was seconded by Democratic Congressman Bob Filner, a member of the House of Representatives for California, who is running for mayor of San Diego, and by Juan Vargas, a Democratic member of the California state Senate.

“It is clear that what we have been doing has not worked,” Vargas told IPS. “This has not been a war on drugs; it is murder of innocent people, on both sides of the border.”

The organisations taking part in the caravan estimate that 70,000 people have been killed, 20,000 have gone missing, 250,000 have been forced to leave their homes, and thousands have been widowed or orphaned – victims of the war on organised crime launched by conservative Mexican President Felipe Calderón, whose term ends Dec. 1.

In the United States, meanwhile, there are two million people in prison for possession of just a few grams of drugs.

The binational trade in drugs and firearms generates between 19 and 39 million dollars a year, laundered by banks in both countries, according to statistics cited by members of the caravan.

The peace movement in Mexico emerged after the murder of Sicilia’s son, Juan Francisco, on Mar. 28, 2011.

In June 2011, the group drove halfway across Mexico, from the centre to the north of the country. And in September 2011 a second caravan drove from central to southern Mexico, to gather the personal accounts of victims’ families and draw support for the movement’s campaign against impunity.

The caravan that is making its way across the United States has the support of more than 200 organisations concerned with immigrant rights, human rights, minority rights and racial justice.

Arms control is the activists’ central demand. But their agenda has also incorporated the questions of improved immigration policy and the decriminalisation of drug consumption, which have broad support in the local press.

The peace caravan’s official start was from the Friendship Park on the San Diego-Tijuana border, which for decades served as a meeting-place for families on both sides to talk to each other through a single chain-link fence.

But new barriers and restrictions on access to the park put in place since 2009 have cut off any contact between people on the two sides.

Standing in front of the barriers, Sicilia urged the U.S. government to change its policy, saying border fences and walls are porous when it comes to smuggling drugs and guns, but “cruel” with respect to human dignity.

“It was very important for us to start from that spot,” Enrique Morones, who founded Border Angels, told IPS.

The activist, whose San Diego-based advocacy group places water caches and supplies in remote desert regions, to prevent deaths of migrants, explained that the number of undocumented persons crossing the border has gone down as a result of the economic crisis in the United States.

But he said the flow has not come to a halt, and added that it now has a new component: families fleeing the spiralling violence in Mexico.

The peace movement has the support of activists from a range of causes in both countries.

The Mexican participants and supporters include leaders of indigenous communities fighting to defend their land against mega-projects in the energy and mining industries.

And in the U.S., the caravan has the backing of human rights groups that are in solidarity with the victims in Mexico; Latino and African-American activists demanding respect for minorities, on both sides of the border; and organisations opposed to the prohibition of drug consumption in this country.

This is a unique experience, because of the diversity of interests brought together by the caravan, Roberto Lovato, co-founder of Presente.org, an organisation that uses the internet to “amplify the political voice of Latino communities” in the United States, told IPS.

Caroline Stewart, the mother of a heroin addict, is a member of A New PATH, which launched the campaign Moms United to End the War on Drugs two years ago. The organisation was one of the groups that met the convoy in Los Angeles.

Stewart told IPS that she and her fellow activists were with the mothers of Mexico because they have suffered similar losses.

She said many of their children had died of drug overdoses or had been in prison for years because many people in the United States believe drug addiction is a moral problem, not an illness.

But the cross-border flow of weapons is the main focus of the caravan. In the United States, which has a population of 313 million, there are an estimated 270 million guns in the hands of civilians.

The Bureau of Alcohol, Tobacco, Firearms and Explosives (ATF) reports that of the 55,000 federally licensed gun stores in the country, 6,700 are along the border.

And 87 percent of the firearms seized by the Mexican authorities over the last five years came from the United States.

The caravan has reached the United States after the shock caused by three mass shootings, which have left 21 people dead and more than 50 wounded since Jul. 20.

The country is also in the midst of the campaign for the November presidential elections. Neither the Democratic candidate, Obama, nor his Republican rival, Mitt Romney, has made gun control a priority in the campaign.

But the U.S. activists participating in the peace convoy hope pressure on Obama will increase as a result of the latest shootings.

On Monday, the caravan received the backing of popular Mexican actors and filmmakers in Hollywood. But on Wednesday, the group will cross into the state of Arizona, where its message in favour of gun control is expected to run into the greatest resistance.