MEXICO CITY, Jun 21 2012 (IPS) - Another Caravan for Peace is being organised in Mexico, but this time it will travel through the United States and call for action against weapons smuggling, as part of a bi-national initiative aimed at attracting the attention of President Barack Obama. 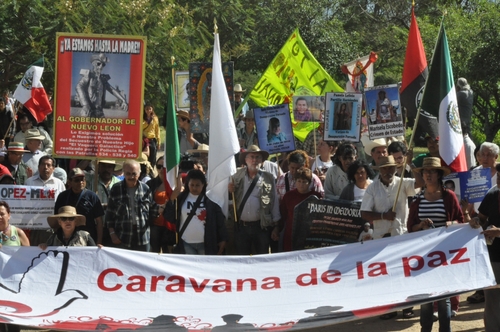 Poet Javier Sicilia, carrying a white flag, at the end of the last caravan, in September 2011. Credit: Lucía Vergara /IPS

The Caravan for Peace of the movement of victims of Mexico’s “war on drugs” will take place between Aug. 12 and Sep. 10, be accompanied by a coalition of some 60 human rights organisations from both countries, and cover 9,400 km, with stops in 25 U.S. cities before ending in Washington.

As with the two previous caravans, which took place within Mexico, this one is also headed up by Mexican poet Javier Sicilia. But its main goal this time around is to call on the U.S. government to collaborate in stemming the illegal flow of weapons into Mexico, in order to curb the spiral of violence on this side of the border.

The caravan is also aimed at demanding a change in the prohibitionist drug policy implemented by both countries, because it has failed utterly, according to the participating organisations. They say it has not succeeded in reducing the supply of and demand for illegal drugs, but on the contrary, has fuelled an enormously profitable business for organised crime.

“We have decided to participate in the caravan with the hope of meeting together as neighbours in a fraternal but critical dialogue, in pursuit of justice,” Sicilia said at a Jun. 18 press conference.

“We are moved by love for our murdered sons and daughters, for our ‘disappeared’, for the orphans, for the police and military personnel who have fallen in the course of duty,” he added.

The hundreds of activists from both countries participating in the caravan, which will depart from the southern California city of San Diego, will also call on both governments to take concrete steps to fight money laundering. In addition, they will urge the adoption of more humane immigration policies, to prevent the deaths of Mexican migrants who attempt to cross the border without the required documentation.

In an interview with IPS, Morones said the caravan’s first stop will be at the cemetery of the “No Olvidados” or “Not Forgotten” in the town of Holtville, California. Some 700 unidentified migrants are buried there, after dying while trying to cross the desert that separates the two countries.

“We will begin in Friendship Park, on the border, with a festival that will include Aztec dancers and music,” he said.

This will be the third caravan organised by the Movement for Peace with Justice and Dignity, founded after the murder of Javier Sicilia’s son, Juan Francisco, on Mar. 28, 2011.

The previous two were held within Mexico, although the first, in June 2011, ended in a U.S. town on Mexico’s northern border, and the second, that September, ended in a Guatemalan town on the southern border.

Scores of victims’ relatives have joined in the cause, calling for the demilitarisation of the Mexican government’s all-out “war” on drug trafficking and the implementation of more effective, non-violent security strategies.

One of the key themes of this caravan is the smuggling of weapons into Mexico from the United States, which has contributed significantly to the bloody wave of violence engulfing the country since conservative President Felipe Calderón militarised the government’s fight against drug cartels, starting in January 2007.

The caravan’s organisers say this government policy has resulted in the deaths of 70,000 people and the disappearance of at least 10,000 more.

According to figures from the U.S. Bureau of Alcohol, Tobacco, Firearms and Explosives (ATF), 87 percent of the weapons seized by Mexican authorities in the last five years came from the United States, mainly from the border state of Texas.

In recent years, the ATF has knowingly allowed firearms to be sold to suspected gun traffickers in order to track the weapons and subsequently identify higher-level traffickers and key figures in Mexican drug cartels.

But many of these weapons never make it back to the United States. An enormous controversy erupted in Mexico over one such case, known as Operation Fast and Furious, which allowed 2,000 firearms to enter Mexico between 2009 and 2011. So far, only 200 have been recovered.

In response to this situation, the Mexican organisation Alianza Cívica (Civic Alliance) has launched a campaign, called Stop Gun Smuggling, which includes a petition calling on Obama to take three actions that do not require the approval of the U.S. Congress.

They are: ban the importation of assault weapons to the United States, because many of them are sent as contraband to Mexico; order dealers to report to the ATF the sale of multiple assault rifles to the same person over a period of five days; and increase the regulatory capacity of the ATF in those regions of the United States that supply the contraband weapons to Mexico.

Alianza Cívica will be taking part in the caravan to collect signatures for the petition along its route.

“We want to start laying the foundations for what will be a long-term collaboration,” said its director, Sergio Aguayo.

Roberto Lovato, co-founder of Presente.org, an organisation that uses the internet to “amplify the political voice of Latino communities” in the United States, told IPS that the caravan will have major symbolic significance, by mixing two different social movement traditions.

“This is the first time in history that the victims will march peacefully in the United States,” he said.

The caravan will also be taking place in between presidential elections in the two countries.

Mexicans go to the polls on Jul. 1, and analysts predict a tight race between Enrique Peña of the opposition Institutional Revolutionary Party (PRI), which ruled the country from 1929 to 2000, and Andrés Manuel López Obrador of the Party of the Democratic Revolution (PRD). The winner will take office on Dec. 1.

In the United States, where the Hispanic community accounts for one out of six people, presidential elections will be held Nov. 6. Obama, of the Democratic Party, is running for re-election.

The caravan aims to bring the voice of the victims of Mexico’s failed drug war to the U.S. public, and to establish a bi-national dialogue on alternatives to prohibition, which has engendered so much violence in the region.

“We recognise the responsibility of our government, but it is also clear that the leaders of Mexico have a great deal of responsibility for the pain that the country is suffering,” said U.S. activist Ted Lewis, the director of human rights programmes at Global Exchange.

Lewis also criticised the presidential candidates in Mexico for failing to promote the peace agenda in their campaigns.