MEXICO CITY, Aug 1 2011 (IPS) - After journeying 1,500 km from Honduras, 56-year-old Maura Sánchez reached the central Zócalo square in the Mexican capital Monday along with hundreds of other demonstrators, to demand respect and justice for undocumented migrants in this country. 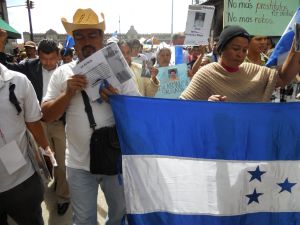 “We are asking the authorities to live up to their obligations, to use a firm hand, because it is government agents themselves who attack migrants,” Sánchez, one of the participants in the “Step by Step Towards Peace Caravan” which has made the trek northwards from Guatemala and Honduras to Mexico City to draw attention to the dangers faced by Central American migrants, told IPS.

Sánchez wants to find out what happened to her daughter-in-law Lourdes Soyapa, 37, who set out from their home in the Honduran capital Tegucigalpa in 1997 to undertake the hazardous journey through Mexico to the United States. The last time she contacted her family was in 1999, from the northern Mexican city of Nogales, on the U.S. border.

Some 400 human rights defenders, undocumented migrants and family members of missing migrants reached Mexico City Monday, the final destination of the Caravan that set out on Jul. 24 and crossed the southern Mexican states of Chiapas, Oaxaca, Tabasco and Veracruz by bus and freight train, following the route taken every year by hundreds of thousands of migrants on their way north.

Along the way, the demonstrators protested the ruthless treatment faced by undocumented migrants at the hands of organised crime groups, youth gangs and corrupt police and border agents. Every year, thousands of migrants are extorted, assaulted, raped, kidnapped and murdered.

“We are working on the drafting of regulations for the Migration Law; we want the mechanism of the migrant transit visa to actually work, and if not, we want it to be eliminated,” Martha Sánchez, a Mexican activist who heads the Movimiento Migrante Mesoamericano, told IPS. “We want the raids, kidnappings and assaults to be investigated, because there are no investigations, let alone answers.”

Some 500,000 undocumented migrants from Central and South America cross Mexico every year in their attempt to reach the United States, according to estimates from academics and human rights groups.

After a brief rally in the Zócalo, the demonstrators marched along the main avenues in downtown Mexico City to the Senate, where they met with a legislative committee.

The Caravan’s demonstration in the capital put the spotlight on something that is a thorny issue in Mexico, as indicated by a 2010 survey on “Mexico, the Americas and the world” carried out by the Centre for Economics Research and Teaching (CIDE), which found that nearly eight out of 10 respondents rejected the presence of undocumented migrants.

One of the highlights of the march occurred Saturday in the town of Tierra Blanca, in the state of Veracruz, 380 km southeast of Mexico City, where the Caravan met with Felipe González, Inter-American Commission on Human Rights (IACHR) Rapporteur on the Rights of Migrant Workers and Their Families.

González, who is on a fact-finding visit to Mexico from Jul. 24 to Aug. 2, collected testimony on numerous human rights abuses, mainly kidnappings, against migrants.

Mexico’s National Human Rights Commission (CNDH) estimates that some 20,000 migrants were kidnapped in 2010.

“We hope the IACHR rapporteur can act as a mediator to get our states to commit themselves to fulfilling their responsibilities to guarantee the safety of migrants who journey through Mexico,” Víctor Herrera, with the Mesa Nacional para las Migraciones en Guatemala (National Forum on Migration in Guatemala – MENAMIG), told IPS.

The activist pointed out that thousands of Central Americans “are extorted, kidnapped and murdered” on their way through Mexico “against a backdrop of total impunity, where the victimisers enjoy more protection than the victims.”

Mexico’s Migration Law, which went into effect in May, recognises the human rights of migrants, decriminalises illegal immigration, and created a migrant transit visa. But activists complain that it is infused with a national security focus, which leaves migrants exposed to abuses.

In a press release, the nearly two dozen human rights and migrant rights groups that organised the Caravan called for the creation of “an effective migrant transit visa or the elimination of the visa requirement…as the only way to ensure a drastic reduction in attacks on migrants.”

Nearly a year after the mass killing of 72 undocumented migrants – mainly from Central America – whose bodies were found in August 2010 on a ranch in the northeastern state of Tamaulipas, the Caravan has shed a negative light on the Mexican government of conservative President Felipe Calderón, which has repeatedly but unconvincingly claimed that it has taken measures to protect migrants.

After several hundred bodies were found in mass graves in the states of Tamaulipas and Durango in April and May, the relatives of missing undocumented Central Americans sent DNA samples from at least 24 different people to find out if their loved ones were in the graves that were unearthed. But they have received no news so far.

Miguel Guamuch left his hometown of San Juan Sacatepéquez, 31 km from the Guatemalan capital, on Jul. 11, 2009. But his wife and three children have no idea what happened to him.

“He was headed for Houston (in the U.S. border state of Texas) and six days later he called and told me he was in Reynosa (Tamaulipas) and that he was going to cross the border. That was the last time my husband spoke to me,” Alicia Chajón, one of the participants in the Caravan, told IPS, crying.

At least 800 Salvadorans and Hondurans have vanished in Mexico, according to associations of families of missing migrants.

Last June, Mexico’s Federal Institute for Access to Public Information decided that the National Institute on Migration had the obligation to gather and provide statistical information on missing Mexican and foreign migrants.

“We will come back as many times as necessary, to raise our voices,” said Sánchez, from Honduras, holding up a photo of her missing daughter-in-law.

* With reporting from Danilo Valladares in Guatemala.