Veracruz – a Black Hole in Mexico 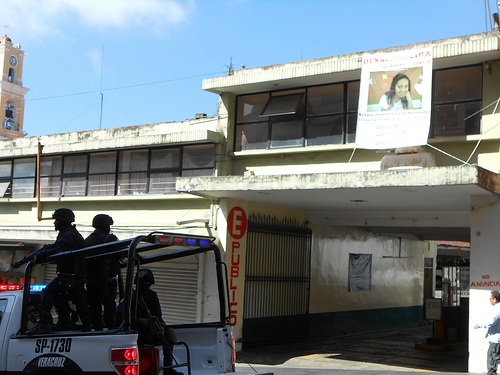 A militarised police patrol, which have become routine in Xalapa, drives past the poster of a missing young woman. Credit: Daniela Pastrana/IPS

XALAPA, Mexico , Nov 29 2012 (IPS) - Something smells rotten in the state of Veracruz. In Xalapa, the capital of this eastern Mexican state, known as the “Athens of Veracruz” because of its strong cultural tradition, fear is in the air.

The police only patrol the streets in convoys, wearing face masks and armed with assault rifles. Flyers with the faces of missing young people are everywhere, plastered along the streets and in bus stops. In university seminars and talks, outsiders are warned that there will be government informants in the audience.

“Xalapa was always a haven for social activists from communities in the north or in the mountains plagued by political violence,” environmental activist Javier Hernández told IPS. “It seemed like a place that would not be touched, but things changed with the military operations and the new governor who took office in 2010.”

Hernández left the state after the murders of journalist Regina Martínez and Professor José Luis Blanco Rosas, in April and May 2012, respectively.

Veracruz, which has 720 km of coastline on the Gulf of Mexico and borders seven other states, has become a kind of long skinny black hole in eastern Mexico in the last few years.

The third-most populous state in the country, with 7.6 million people, and one of the nine states ruled by the Institutional Revolutionary Party (PRI) for 83 years, Veracruz is today the most dangerous part of the country for the tens of thousands of Central American migrants who cross Mexico every year in their attempt to reach the United States.

One out of three migrants who have gone missing in Mexico were last seen in Veracruz.

“We know they are kidnapped, and the ones who can’t pay the ransom are forced into crime. The least fortunate become victims of labour or sexual exploitation,” said Rubén Figueroa, of the Mesoamerican Migrant Movement, which in October organised a protest convoy of women whose sons or daughters have disappeared.

But this is not only a dangerous place for Central American migrants. In the last two years, nine reporters have been killed in Veracruz, two have gone missing, at least a dozen have been forced to flee into exile, and the offices of a newspaper were set on fire.

Women’s rights groups are also on the alert. They started to document the disappearance of women and girls in 2009, when 14 women were killed in a brothel in Ciudad Isla, a town in southern Veracruz.

The mutilated bodies of the women were only found several months after they went missing.

“Women are disappearing, but so are boys and girls, teenagers and young men, and, especially in Xalapa, many students,” an activist who asked to remain anonymous told IPS.

Reliable statistics on the phenomenon are not available. The local authorities even removed information on people reported as missing from the local government’s website.

According to the outgoing national government of Felipe Calderón, more than 600 people have disappeared in the state in the last six years.

But that would appear to be the tip of the iceberg. An article published in October by the newspaper Milenio, based on information from forensic services across the country, reported that at least 5,245 of the 24,000 bodies buried in unmarked graves during the six-year Calderón administration were buried in Veracruz.

In Puerto de Veracruz alone, a city of half a million people, there were 1,000 unidentified bodies in 2011.

And these figures, provided by some 30 municipal governments, are incomplete.

The state government of Javier Duarte refused to provide information, meanwhile, under the argument that it would be an “invasion of the privacy” of the unidentified bodies, and that the information would endanger institutions and “the territorial integrity of the state.”

“There are territories that have been completely lost, where no one is documenting what is happening,” said a rural activist who preferred not to be named. “In the north of the state, in the area of the Pánuco river, and in the south, around Poza Rica and Coatzacoalcos, things are happening that no one dares report,” he told IPS.

And no solution is in sight. On the contrary, security analysts predict a rise in violence in regions dominated by the Los Zetas drug cartel, since its leader, Heriberto Lazcano, was shot down by the Mexican marines on Oct. 7.

Los Zetas, the most violent of the eight organised crime groups operating in Mexico, was created by former members of the military who had originally joined the Gulf Cartel. In the last few years, its power and influence has grown, and it now controls the entire eastern edge of the country.

The latest battle by the people of Xalapa to regain control over their city was waged in the Jul. 2 presidential and legislative elections.

The PRI lost the state’s seat in the national legislature, which was won by left-wing candidate David Flores, thanks to Xalapa voters.

But the party that governed Mexico for seven decades until 2000, and is now preparing to return to power when its presidential candidate Enrique Peña takes office on Dec. 1, won the rest of the state posts with the votes from rural areas and the oil-producing region, where the oil workers union is controlled by PRI Senator Carlos Romero Deschamps.

“There was a sense of hope during the elections, after a few mothers dared to speak out about the disappearance of their sons and daughters,” said Hernández.

“But then the government of Veracruz began to get worried and started to pressure the victims to keep their mouths shut. And Xalapa became an impossible place to live,” the environmentalist said.