MEXICO CITY, Nov 8 2011 (IPS) - DNA analysis, ethical tribunals and diplomatic pressure are the new instruments that migrants’ organisations are wielding to combat the abuses suffered by undocumented migrants in Mexico and the United States. 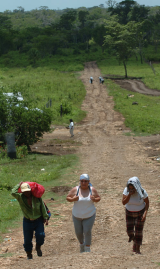 The Committee of Relatives of Dead and Missing Migrants of El Salvador (COFAMIDE) set up a databank for disappeared migrants, with the support of the Argentine Forensic Anthropology Team (EAAF) and the Salvadoran government.

The databank “is very useful, as it facilitates identification of remains and sustains relatives’ hopes of finding missing migrants,” founder and secretary general of COFAMIDE Lucy de Acevedo told IPS.

“It was our greatest dream, because of the huge number of cases and the scarcity of information,” she said.

Since 2010, 143 samples have been collected, analysed and stored in the U.S. state of Arizona, on the border with Mexico, and the remains of two men and one woman from El Salvador have been identified.

Since it began its work in 2006, COFAMIDE has managed to identify 59 people.

The DNA samples are being compared for matches with the remains of 500 unidentified immigrants in Pima, Arizona.

Tens of thousands of undocumented Central Americans cross Mexico every year, on their own or guided by human traffickers or “coyotes”, in an attempt to make it to the United States. Along the way they are exposed to robbery, kidnapping, ill-treatment and even murder by Mexican police or criminals, often working in collusion.

At least 130,000 undocumented Central Americans crossed Mexico in 2010 and managed to cross the border into the United States, but were then deported, according to the Mexican Institute of Migration.

In Honduras the establishment of a migrants’ databank got under way in January.

“We are collecting case testimonies and documents. We hope to start collecting DNA samples this month,” Lidia de Souza, coordinator of the Human Mobility Pastorate of the Honduran Catholic Church, told IPS.

The Pastorate works with the Network of Committees for Honduran Migrants and Relatives, the National Forum for Migration and the EAAF.

De Souza is part of the Caravan of Mothers Searching for their Children Missing in Transit, made up of relatives of Hondurans, Nicaraguans and Salvadorans who disappeared in Mexico. They met Oct. 29 in southern Mexico and are covering nine Mexican states to canvass support for the searches and draw attention to the abuses suffered by undocumented migrants.

In Honduras, genetic material will be collected from 100 families for comparison with the databank in Arizona.

More and more migrants have gone missing since 2000, due to the rising activity of criminal groups and corrupt state agents in Mexico.

Tragedies like the Aug. 23, 2010 mass killing of 72 undocumented migrants in San Fernando, in the northeastern Mexican state of Tamaulipas, have heightened fears among the relatives of missing migrants.

The massacre was one of the high-profile cases addressed by the International Court of Conscience of People on the Move, which held a hearing in October 2010 in Ecuador and another the next month in Mexico, that are to be the basis of migration complaints before the Mexican chapter of the Permanent People’s Tribunal (PPT).

“We want the most emblematic cases to be adjudicated by the Permanent Tribunal,” Camilo Pérez, the PPT coordinator and an academic at the National Autonomous University of Mexico (UNAM), told IPS.

“The Court of Conscience drew attention to the issues of migration and human rights,” he said.

The seven areas the PPT will address include migration, asylum and forced displacement.

This year, workshops will be held in Arizona and at least six Mexican states where migration is a major phenomenon; meanwhile, three court hearings are planned for 2012 and four for 2013. The PPT process will conclude with a ruling in 2013 or 2014.

One of the two survivors from the San Fernando killings, Freddy Lala of Ecuador, is living in hiding under the protection of his government.

“We have documented cases of Ecuadorians who have been mistreated in Mexico. But their families have received threats, and the government is not using diplomatic pressure to ensure investigations,” Flor Haro, head of the Centro Familiar de Ayuda a Migrantes (CEFAMM), a family support centre for migrants in Quito, told IPS.

Haro complained about Lala’s enforced lifestyle in hiding and the absence of justice for his case in Mexico, at the seminar “Los pueblos en movimiento: tribunales de conciencia, migración y derechos humanos” (People on the Move: Courts of Conscience, Migration and Human Rights), held Friday Nov. 4 at UNAM.

Since Operation Gatekeeper, a stepped-up border security programme, was implemented by the U.S. border patrol in 1994, a total of 5,747 people have died attempting to cross the border from Mexico, according to human rights organisations.

The Mexican Foreign Ministry estimates that 2,949 Mexican migrants have died since 2004, of whom 955 have not been identified.

No More Deaths, an Arizona-based NGO, indicated in its September report “A Culture of Cruelty: Abuse and Impunity in Short-Term U.S. Border Patrol Custody” that in 2009-2010 alone, at least 253 people died attempting to cross the border through southern Arizona.

The organisation attributed the deaths to U.S. border patrol practices like intentionally funneling migrants to deadly regions and the dispersal of groups as an apprehension tactic; impeding search and rescue efforts; and vandalising life-saving resources such as food, water, and blankets, placed by relief groups along the customary routes of undocumented migrants.

Organisations of relatives of disappeared migrants asked the Mexican government to compile databases, with genetic information, on missing migrants.

The Red Cross has proposed a common protocol for Mexico, Central America and the United States to facilitate identification of bodies.

“We want a single regional register with the DNA information. After comparison locally, we want to continue the search in other morgues, not just in Arizona,” said COFAMIDE’s de Acevedo.

Most of the disappearances of Hondurans “may have occurred on the border with Arizona, because the last phone calls to relatives were made from that area,” according to de Souza, of the Human Mobility Pastorate. But this, she says, does not absolve Mexico of responsibility,

The Network of Committees for Honduran Migrants and Relatives, which groups over 30 organisations, is dealing with 300 proven cases of missing migrants and another 300 with incomplete data.