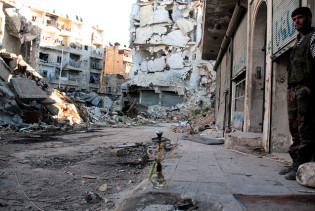 By Jim Lobe and Joe Hitchon
A series of reversals for Syria’s rebels this month has prompted its supporters here to call for much greater U.S. military intervention in the civil war in order to give them a stronger bargaining position in advance of any peace negotiations.

By Joe Hitchon
Twenty of the world’s most fragile states, including those currently affected by conflict, have achieved one or more of the development targets outlined under the Millennium Development Goals (MDGs), the World Bank said this week.

By Joe Hitchon
Women and minorities should be a top priority in U.S. policy toward Egypt and its Muslim Brotherhood government leaders, experts here said on Friday, despite increasingly unfavourable public views towards Egypt.

By Joe Hitchon
Researchers have unveiled new data warning that governments in Latin America are infringing on the rights of their indigenous populations in a bid to fuel development through the extraction of natural resources.

By Joe Hitchon
A top United Nations official is warning that the plight of Palestinian refugees is being neglected amidst the ongoing crisis in Syria.

By Joe Hitchon
Environmentalists here are warning that the United States is not on track to meet a target of a 17-percent reduction in carbon emissions by 2020, despite President Barack Obama’s stated commitment.

By Joe Hitchon
Environmentalists are warning that a meeting of environment ministers that took place Monday in Sweden has agreed on a weak and inadequate response plan in case of an oil spill in the Arctic Ocean.
ADVERTISEMENT ADVERTISEMENT