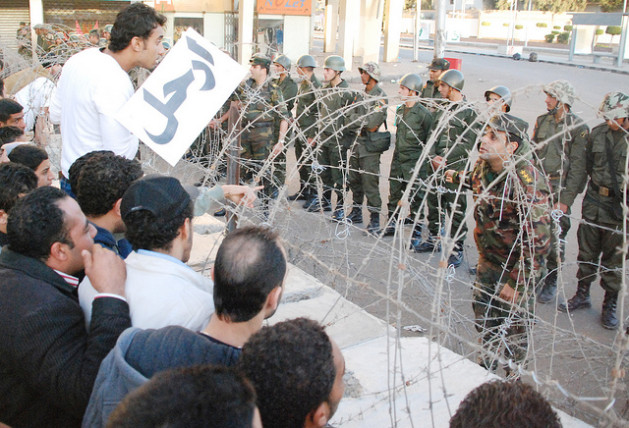 WASHINGTON, Apr 13 2013 (IPS) - Women and minorities should be a top priority in U.S. policy toward Egypt and its Muslim Brotherhood government leaders, experts here said on Friday, despite increasingly unfavourable public views towards Egypt.

While Egypt is a critical and longtime U.S. ally, the June 2012 election that resulted in the Muslim Brotherhood’s victory has severely strained those ties. The situation has been further complicated by a massive economic crisis that has roiled Cairo since the uprisings of the Arab Spring two years ago.

Even as Egyptian officials are currently engaged in talks for a loan from the International Monetary Fund (IMF) – an institution in which the U.S. has an effective veto – that could be upwards of five billion dollars, conservatives in the U.S. Congress have recently refused to offer their Egyptian counterparts more than token foreign assistance.

“The Egyptians are so firmly a part of the American patronage network that Egypt’s destiny will stay irrevocably linked to the United States, and will thus remain a client state of the U.S.,” Joshua Stacher, a fellow at the Wilson Center, a Washington think tank, told IPS.

“This limits to a great extent where it can turn for money, and I think they are content to remain part of this U.S. constellation. This is really a problem of the IMF serving as an auxiliary of U.S. power rather than an international financial institution that is neutral and providing balance of payment policy suggestions for member countries.”

Still, political disagreements here in Washington over how to engage with Egypt have not yet been cleared up.

“There is a fundamental tension between U.S. values and U.S. interests in our policy toward Egypt, whether it be about cooperation on regional issues, the rights of women, protest laws, freedom of expression or sectarian rhetoric on the part of the Muslim Brotherhood,” Michael Wahid Hanna, a senior fellow at the Century Foundation, a Washington think tank, said Friday.

“These issues aren’t just about values anymore. An embargo is off the table so it’s not just about affording support to an elected government that is polarising and we see autocratic tendencies coming to the fore that are destabilising. Before we can even talk about values, we must have a stable Egypt – and not just repressive stability.”

Hanna said there is no option of pulling back U.S. support, noting that the situation in Egypt was not like that in Syria. Yet compounding the political calculations, a public poll released last month found that U.S. attitudes toward Egypt have plummeted in recent years.

“Throughout the last two decades, Egypt’s favourability ratings in the U.S. were in the 60 percent range,” James Zogby, Director of Zogby Research Services, a Washington opinion research company, said Friday.

“In 2011 – at the beginning of the demonstrations against [former President Hosni] Mubarak, the numbers dropped down to 40 percent … In 2012, they dropped to just 30 percent. Americans don’t know Egypt, and their previously ‘soft’ associations of the country – like for instance, the pyramids –have now been replaced by its volatility.”

Intensifying Egypt’s foreign relations issues with the United States, the Morsi government must still devise an economic plan to convince the IMF to hand over a pending 4.8-billion-dollar loan, a figure recent reports suggest could go up. The Egyptian government has said it hopes to reach a final agreement with the IMF within the next two weeks, while the government of Qatar has made repeated emergency cash infusions into Egyptian coffers.

The stakes are high for the Muslim Brotherhood-led administration. Foreign currency reserves are critically low, reportedly now covering less than three months of imports, and the local currency has lost a tenth of its value just since the start of the year.

With an IMF team currently in Cairo, Egyptian officials must convince the Washington-based fund that it will make reforms to boost growth and curb an unaffordable budget deficit. Economists say the situation will eventually require unpopular tax hikes and politically risky cuts to the current system of state subsidies for fuel and bread.

“The subsidies are definitely an important component of the economic problems facing Egypt, and it’s an important issue in a lot of low-income Egyptian households,” Hesham Sallam, co-editor of Jadaliyya, an online political magazine, told IPS.

“Yet the government has not shown publicly any intention of finding a fair way of distributing the costs, of dealing with the deficit, of easing pressure on the underprivileged in an open and fair manner.”

Despite being the world’s largest wheat importer, Egypt has been forced to cut back on these imports. Yet doing so is running down grain reserves and will almost certainly exacerbate its struggle to feed the country’s 84 million people.

Sallam also warns that the IMF negotiations have been notably opaque, leading to rising frustration.

“The terms of the loan do not have much transparency, and those terms are going to be very important in determining the orientation of the Egyptian economy,” he said.

“Social justice has been one of the main slogans of the revolution, but the decisions that will decide the future of the Egyptian economy are mainly taking place behind closed doors, with very little engagement with the Egyptian people or the stakeholders.”

The threat of future instability versus the current perception of the Muslim Brotherhood has defined much of the policy debate here in Washington.

Particularly conservative members of Congress have expressed discomfort sending aid to the Muslim Brotherhood government, with some suggesting not only a reduction but an outright discontinuation of U.S. aid to Egypt.

“Congress is trying to score some cheap political points on this, but the Defence Department, State Department and the president understand that disengagement would be against national security interests,” the Wilson Center’s Stacher said.

“They understand that there is a longstanding relationship with Egypt – that it’s not a perfect relationship, but is one that has long been cultivated, and they want to keep the country in the U.S. sphere of influence. So, Congress is going to keep putting up roadblocks and the executive branch – and the Defence Department – is going to find crafty ways to get around them.”

There are also major business interests involved in this situation. Egypt is a massive market, and has traditionally imported a significant amount of military hardware and industrial machinery from the United States.

“Certainly there is a domestic American economic consideration here about changing our relationship with Egypt,” Stacher continues. “If they are going to keep buying tanks, we would rather they buy our tanks.”