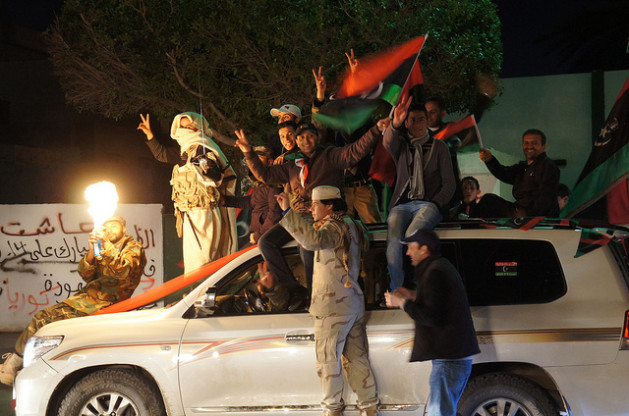 WASHINGTON, Apr 5 2013 (IPS) - While the tenth anniversary last month of Washington’s invasion of Iraq provoked overwhelmingly negative reviews of the adventure except among its most die-hard neo-conservative proponents, a more recent – albeit far less dramatic and costly – intervention has faded almost completely from public notice.

Nonetheless, nearly 18 months after Western-backed rebels killed Moammar Gaddafi in the city of Sirte, the intervention by the U.S. and its NATO allies in the civil war in Libya appears increasingly costly on several levels.

The operation took place under the auspices of the Responsibility to Protect but it turned into a mission of regime change, and that has made the Russians and Chinese feel that they were deceived.

That assessment applies not only to Libya and its North African neighbours, especially Mali, but also to relations among the great powers – most immediately with respect to Syria, where Russia and China have firmly resisted any western effort in the U.N. Security Council to undermine the government of President Bashar al-Assad or support the insurgency against him.

While the decision of China’s new president, Xi Jinping, to make his first overseas visit to Russia last month was by no means attributable only – or even primarily – to Western intervention in Libya, their strong objections to the way NATO interpreted a Security Council resolution to protect civilian lives as licence for “regime change” in Tripoli certainly contributed to a renewed sense of solidarity between the two former Communist rivals.

“We are living through an era of flux and change,” Xi told a university audience in Moscow in a thinly veiled reference to the West. “No country or bloc of countries can again single-handedly dominate world affairs.” For his part, Russian President Vladimir Putin praised the two countries’ “strategic partnership” on the Security Council.

Indeed, the Libya precedent was even evoked during this week’s crisis on the Korean Peninsula.

“This land is neither the Balkans nor Iraq and Libya,” boasted the official North Korean news agency in a reference to three other recent U.S. interventions against countries that, unlike Pyongyang, either lacked or, like Gaddafi, abandoned their efforts to obtain nuclear weapons that could presumably have been used to deter external attack.

Acting on a verbal threat by Gaddafi to exterminate rebels in their stronghold of Benghazi in the early stages of the civil war, the U.N. Security Council approved Resolution 1973 by a vote of 10-0 with five abstentions – Russia, China, Germany, Brazil, and India – on Mar. 17, 2011.

Pursuant to the emerging “Responsibility to Protect” (R2P) legal doctrine, the resolution authorised member nations to take “all necessary measures” to protect civilians under threat of attack, including by creating a “no-fly zone” over the country’s air space.

As the civil war intensified – albeit inconclusively – over the following months, however, some Arab and key Western governments, notably Britain, France, and the U.S., took more aggressive measures in support of the rebels. These ranged from on-the-ground training to supplying arms and providing real-time tactical intelligence, until Tripoli fell in late August and Gaddafi was killed two months later.

While a comprehensive assessment of the costs and benefits is premature, an initial balance sheet would appear to confirm the notion that military intervention often reaps unintended – and negative – consequences.

On the positive side with respect to Libya itself, a long-ruling and ruthless dictator is no longer in power, and the country’s oil production has bounced back with surprising speed.

On the other hand, the central government has proved unable to reassert its control over much of the nation, leaving a huge security vacuum filled by a multitude of militias – including radical Islamists who may have been responsible for the killing of the U.S. ambassador and two of his staff in Benghazi last September.

“Libya has gone from being a tyrannical state to being barely a state at all,” according to Robert Kaplan, a senior fellow at the Center for a New American Security (CNAS) in an article published Thursday “…(A) descent into worse chaos cannot be ruled out.”

That vacuum also permitted the wholesale looting of Gaddafi’s massive arsenals. “The weapons proliferation that we saw coming out of the Libyan conflict was of a scale greater than any previous conflict – probably ten times more weapons than we saw going on the loose in places like Iraq, Somalia, and Afghanistan,” Peter Bouckhert of Human Rights Watch told the Washington Post earlier this year.

That looting resulted in the first instance in the destabilisation of Mali where Tuareg mercenaries previously employed by Gaddafi returned home to northern Mali, quickly evicted the army, which, in turn, overthrew Bamako’s democratically elected government.

With the intervention of French and Chadian military forces earlier this year, Bamako has since retaken control of the more populous parts of northern Mali. But the region, now being patrolled by U.S. drones, is still subject to attack by Islamist forces aligned with Al-Qaeda, and the country’s future and unity remain uncertain at best.

Nor has Mali and other Sahelian countries been the only destination for Gaddafi’s former arsenal.

Substantial amounts of Libyan weapons have been traced to Syria, fuelling that civil war, and to Egypt’s Sinai Peninsula where Bedouin tribes – some with ties to radical Islamists – have defied local authorities and occasionally even challenged the army in the tumultuous post-Mubarak period.

But the Libyan intervention may have wrought its most consequential damage on great-power relations, particularly with respect to the prospects for future agreement among the five veto-wielding permanent members of the U.N. Security Council to authorise military intervention in civil wars, even for humanitarian purposes.

“The operation took place under the auspices of the Responsibility to Protect,” noted Charles Kupchan, a senior fellow at the Council on Foreign Relations, “but it turned into a mission of regime change, and that has made the Russians and Chinese feel that they were deceived.

“And that perception in Moscow and Beijing has fed into their position on Syria and makes it unlikely that China and Russia will anytime soon again approve a humanitarian intervention,” he told IPS.

And just as North Korea feels Gaddafi’s fate vindicated its decision to risk international isolation by building a nuclear weapon, hard-liners in Iran, who are convinced that Washington also seeks to overthrow the Islamic Republic, have been citing the Libya precedent in the run-up to this week’s talks in Almaty, Kazakhstan, with the five permanent members of the Security Council plus Germany, to argue against any concessions on the fate of its nuclear programme.

According to former top CIA Middle East analyst Paul Pillar, Iranian leaders have only to look at Washington’s intervention in Libya “…that overthrew a Middle Eastern regime after it had reached an agreement with the United States to give up all its nuclear and other unconventional weapons program.

“In hindsight, the intervention in Libya makes clear that even interventions that appear successful in the short term can have negative knock-on effects that call into question their value,” according to Kupchan.