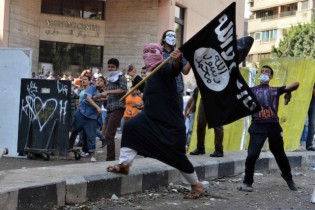 By Jim Lobe
The administration of President Barack Obama announced Wednesday it was freezing hundreds of millions of dollars in aid to the Egyptian military pending "credible progress" toward a return to democratic rule.

By Jasmin Ramsey
Almost 1,000 Egyptians have died, according to official count, since Aug. 14 when Egypt's armed forces began cracking down on Muslim Brotherhood-led protests against the military ouster of President Mohamed Morsi. That number well exceeds the 846 people officials say died during the 18 days of protests that ended Hosni Mubarak's 30-year rule in January 2011.

By Adam Morrow and Khaled Moussa al-Omrani
The ouster of Egypt's first freely elected president by the military has led some to warn of a possible Algeria-style civil war. Local analysts, however, dismiss the likelihood of the "Algeria scenario" occurring in Egypt.

Israel May Even Miss Morsi

By Pierre Klochendler
For Israel, what must be exercised in the volatile struggle for power and democracy in Egypt are, above everything else, three follow-on principles: stability within its institutions, particularly the armed forces; security in the Sinai Peninsula and the Hamas-ruled Gaza Strip, which both border Israel; and peace with Israel itself.

By Jim Lobe
U.S. President Barack Obama Monday called for both the Muslim Brotherhood-dominated government of Egyptian President Mohamed Morsi and opposition forces to compromise in the fast-developing political crisis.

By Adam Morrow and Khaled Moussa al-Omrani
Ethiopia's diversion of part of the Blue Nile late last month has both rocked Cairo's relations with Addis Ababa and provided fodder for Egypt's ongoing war of attrition between its Islamist government and secular opposition.

By Adam Morrow and Khaled Moussa al-Omrani
The post-revolution struggle between Egypt's judiciary and President Mohammed Morsi, the country's first Islamist head of state, finally seems to be coming to a head over controversial draft legislation regulating judicial authority.