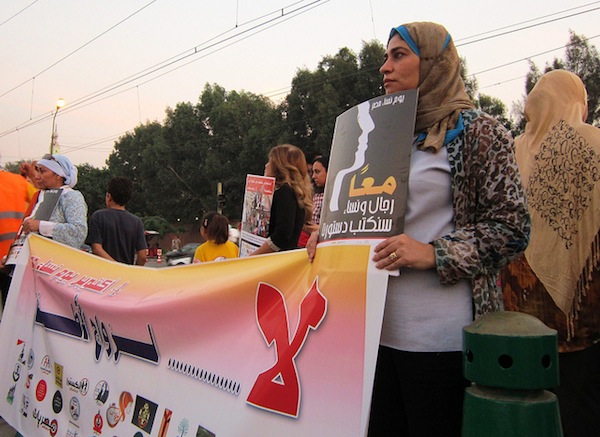 Critics of a proposed law say it could harm women's rights and other groups' ability to operate (file photo). Credit: Cam McGrath/IPS

The legislation would allow the government to intervene in the internal governance and activities of civil society organisations and to control all funding.

If enacted, some critics say, Egypt’s 41,000 non-governmental organisations (NGOs) would become part of the state apparatus.

“If this bill passes, all of Egypt’s NGOs would essentially work under the government,” Hafez Abu Seada, chairman of the non-profit Egyptian Organisation for Human Rights (EOHR), told IPS. “We would operate not as independents, but as agents for the state.”

"If this bill passes, all of Egypt's NGOs would essentially work under the government."
-- Hafez Abu Seada,

In 2002, the government issued Law 84, which has been the target of continual criticism for the control it gives the state over NGO establishment and activity.

The National Salvation Front (NSF), Egypt’s main opposition bloc, has accused the Islamist government of President Mohamed Morsi of attempting to impose even tighter restrictions on civil society in a bid to silence those who would hold it accountable.

The bill “seeks to reproduce a police state by putting into law the role of security bodies in overseeing the work of civil society groups”, the NSF said in a statement. “[Its] main goal is to stop human rights organisations from pursuing officials for human rights abuses under President Morsi and his security apparatuses.”

Mokhtar El-Ashry, head of the legal committee of the Muslim Brotherhood’s political wing, has accused opposition forces of failing to read or understand the NGO draft law. He said the bill aims to facilitate the work of civil society groups and “frees them of restrictions”.

El-Ashry’s argument is a tough sell. Critics say the draft treats NGOs as state institutions and their directors and staff as civil servants. The bill mandates that the Egyptian government intervene in nearly every detail of NGO affairs, from the composition and election of board members to their competencies and the organisation’s choice of affiliation, funding and activities.

“This is completely contrary to what an NGO is supposed to be,” one programme manager of a non-profit organisation that works in the education sector told IPS on condition of anonymity. “If it passes, we might as well ask Mr. Morsi how he would like us to implement his policies.”

More alarming, say rights groups, is that the law stipulates bimonthly administrative and financial inspections of civil society organisations and opens visitor logs and details of private meetings to the scrutiny of security agencies. The groups see this as an imminent threat to the confidentiality of political dissidents, victims of abuse, and whistleblowers.

One bright spot, Abu Seada conceded, is that the bill provides a process for registering NGOs.

Under Mubarak, NGOs faced significant hurdles in registering their organisations, and many operated in Egypt without licenses – a situation the government tolerated, as the threat of closure kept them wary of crossing red lines.

The draft law would establish a nine-member steering committee to approve the registration of civil society groups. The interagency panel is authorised to reject the registration of any NGO it deems inconsistent with the “needs” of Egyptian society – a vague term that critics say could be used, for example, to exclude groups that investigate torture or advocate women’s rights.

The steering committee will have absolute power to approve or reject any foreign or domestic funding for local NGOs.

Closing the spigot of foreign funding is one technique successive governments have used to pressure NGOs that stray into sensitive areas, explained the director of a Cairo-based development organisation, who did not want his name used.

“Charities have local sources of funding, but NGOs that engage in democracy building or human rights must rely almost entirely on foreign funding and without it must scale back their activities or shut down,” the director said.

Nearly all foreign funding has been shut off since 2011, when government officials under the military junta launched a crackdown on civil society organisations.

“Every funding request in the last year and a half has been refused,” says EOHR’s Abu Seada. “We’ve had to reduce our staff from 30 to 12 and close many of our projects. Most of the other NGOs in Egypt are facing similar problems.”

Negad El-Borai, an attorney for democracy and human rights activists, said the draft law’s articles are a minefield of obstacles and pretexts to deny funding.

NGOs that attempt to engage in activities that diverge from state policies or expose government abuses would quickly find themselves bogged down in bureaucracy and court cases, he added.

“They can deny funding or [close] NGOs for any number of reasons,” El-Borai told IPS. “And if it goes to court…we must stop all activities until we get a verdict, and that will take at least one or two years.”

The final draft of the Brotherhood-backed law has been submitted to the Shura Council, the upper house of parliament that currently holds legislative powers. Local and international rights groups fear the Islamist-stacked legislative body will rubber-stamp it into law.

“That would be a disaster [for civil society],” said El-Borai. “We managed to lobby hard for changes, but it is still far short of international standards.”